Within the last decade, the consumer demand for subcompact .32 or .380 caliber pocket pistols has skyrocketed to the point that the majority of handgun manufacturers now produce their own offerings in this arena.  Ruger is no exception.  The Lightweight Compact Pistol .380 is not only the smallest firearm in Ruger’s ever expanding arsenal, it’s one of the tiniest hammer-fired pocket pistols available from any manufacturer on the marketplace. 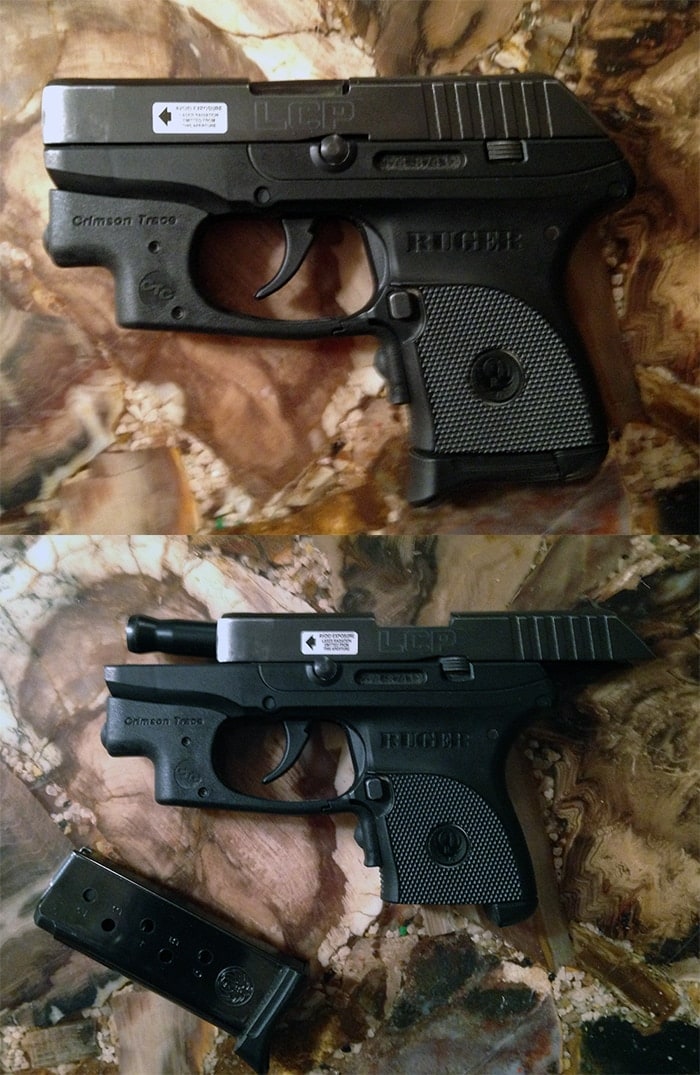 Ruger markets the LCP, which is not to be confused with its slightly larger brother the LC380, as either a defensive backup weapon or as a concealed EDC (everyday carry) piece.  Ruger is a company I’ve always held immense respect for, but I can’t help question if there is a genuine role for these tiny pocket pistols in today’s modern era.

Why would I go with a tiny, underpowered .380 as a defensive weapon when I could just as easily conceal carry a larger pistol in a more potent caliber such as a 9mm or a .45 ACP?  I decided to find the answer to that question with the LCP.

The LCP I used for testing is a standard, 6+1 model with a Crimson Trace laser sight added.

Ruger has received some criticism for the LCP, with some claiming it’s a rip-off of the incredibly similar Kel-Tec P-3AT .380 that hit the marketplace a few years earlier.  Nevertheless, it’s no secret that Ruger is known for producing durable and high quality products, so I would be naturally hesitant to discount the LCP as a rip-off of anything.  The LCP is about an ounce heavier than the Kel-Tec version and features different amenities, such as an external slide stop and an extractor that’s in the same vein as a Glock. 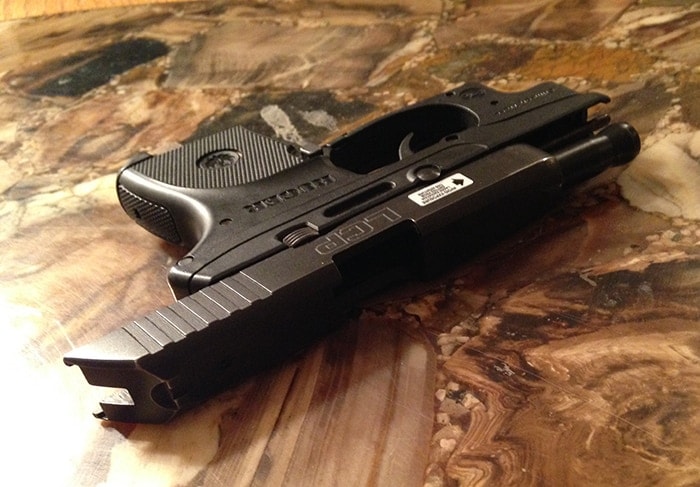 At 9.4 oz (with the magazine empty) and with a grip that can only accommodate two of my fingers even with the magazine extension, there is no doubt that the reason the Ruger LCP feels so lightweight is because of the glass-filled nylon frame.

In stark contrast to many other pocket pistols like a Colt Mustang, the hammer doesn’t protrude out of the LCP, allowing you to draw quickly without the risk of snagging the pistol on your clothing.

I’m always comforted knowing I’ll be shooting what I’m aiming at, and considering how miniscule the sights are on the LCP, the Crimson Trace is a more than welcome addition.  The laser’s trigger is located on the front end of the grip, and is easily activated by just a light press of the finger. 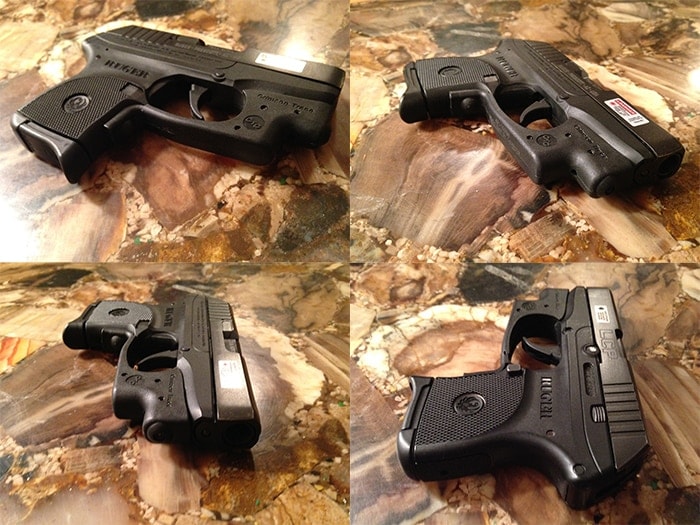 With several boxes of Federal and Blazer .380 90 grain FMJ, and Hornady Critical Defense 90 grain hollow points in tow, I headed off to the firing line.  For a pistol this small, there are always two things you naturally expect: a heavy trigger pull and snappy recoil.  On the firing line, the weighty trigger pull was the first thing I noticed about the LCP.  In a defensive situation where my adrenaline would be rushing, I’m pretty sure I wouldn’t give a second thought to it.

But staring down the sights at a paper target, the trigger pull on the LCP is among the grittiest I’ve ever encountered.

I have to admit, it’s hard not to flinch on the first couple of shots as you draw the coarse trigger home and anticipate the snap that is to come, but fortunately, it isn’t something you can’t adapt to.  Soon enough, I was firing the pistol in a controlled manner and putting bullets within the circle on paper.  Bottom line: the LCP is not a pleasure to shoot.  But then again, that’s not what Ruger intended it for either. 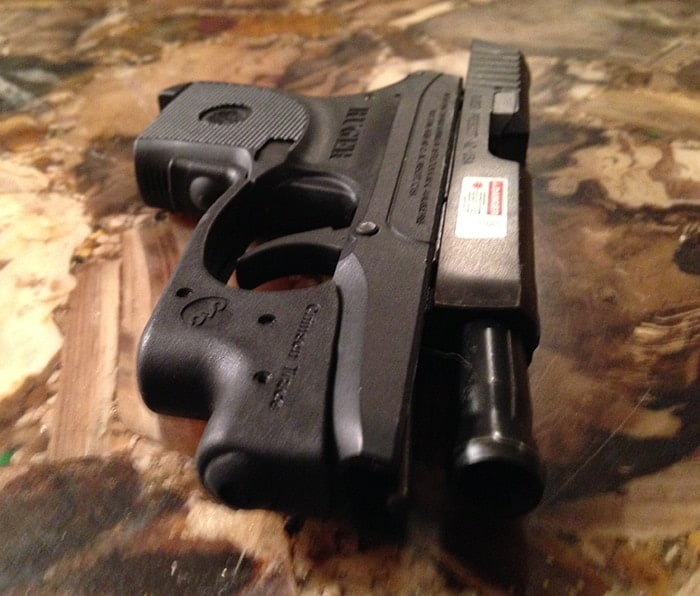 As for the Crimson Trace, there is a learning curve to it.  Those who think adding a laser to your handgun effectively gives you the superhuman ability to shoot the eye out of a flying bird, or something to that effect, are severely mistaken.  If you’re going to invest the hundreds of dollars into adding a laser to your gun, you’re going to need to invest a lot of hours into practicing with it as well.

When I tried to line up the laser with the sights at 25 feet, my shots repeatedly pulled away from the target.  Frustrated, I tried a new approach: instead of trying to match the sights with the laser, I kept both eyes open and simply looked at where the laser was pointed, keeping the pistol held high in the same position.  I won’t call myself an expert shot with the Crimson Trace by any means with this method, but I was able to drastically improve my accuracy. 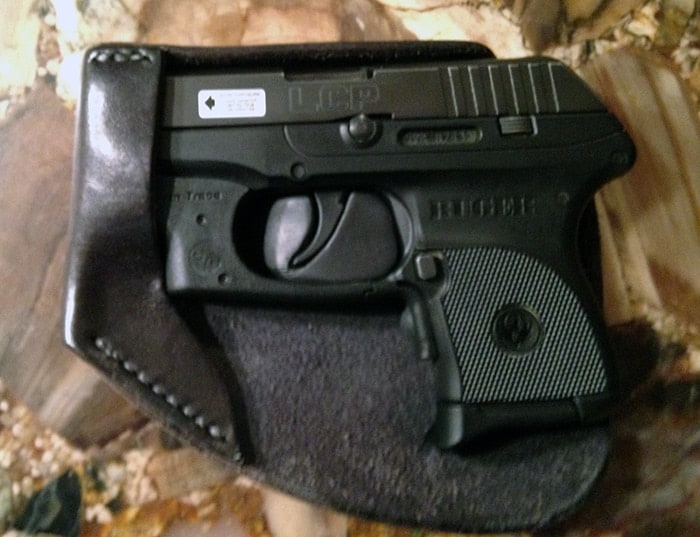 Reliability wise, the LCP is perfect!  I’ve used plenty of Ruger firearms throughout my shooting life, and all have been supremely reliable.  The LCP I used has continued that tradition.  With hundreds of rounds of full metal jacket and hollow point rounds sent down the tube, I’ve never seen the weapon suffer a stoppage, malfunction, stovepipe, or jam.

Near the beginning of this article, I stated that I would use the Ruger LCP to answer the following question: why would I want to carry a little .380 pocket pistol 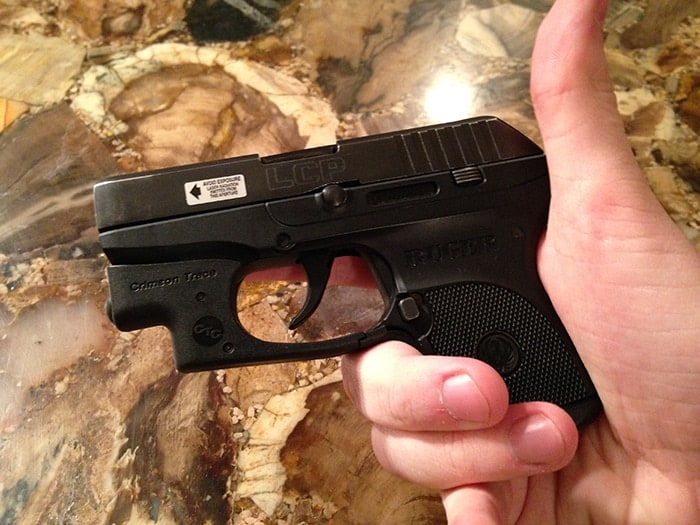 as a defensive weapon when I could easily conceal carry a larger pistol in a bigger caliber?  Honestly, I still wouldn’t want to.

But even though the LCP would not be my preference, I can see why it has found favor with many individuals who concealed carry.

It’s easy to stick in your pocket and forget about it (though you wouldn’t want to do that), and it has proven to have the same level of quality you would expect from Ruger.  If you’re on the market for a .380 pocket pistol you can conceal carry all day long, the LCP has earned my recommendation.