Light Compact Revolvers. This has become one of Ruger’s specialties. The line has several permutations. Ruger makes several .38s, a .357 (which has a steel frame, instead of the typical aluminum) and now the rimfire LCR-22.

These are great concealed carry guns. Sometimes I think that folks get a bit too attached to their semi-automatic pistols. Yes, they are thin, but there is so much that can go wrong with a pistol. I’m constantly astounded by companies that sell weapons meant for self-defense that don’t work a hundred percent of the time. Most reputable companies have worked out those bugs. And, to Ruger’s credit, I’ve never had a malfunction with a Ruger auto.

Not a revolver, though. And not a Ruger revolver.

But why design a concealed carry revolver chambered in .22 LR?

I’m always on the lookout for a .22 LR that will mimic the shooting experience of a larger caliber gun—especially a gun that I intend to carry. Don’t get me wrong. I want a Browning 1911-22 because it’s cute. But I want a full sized 1911 in .22 LR so I can practice live fire shooting on the cheap. 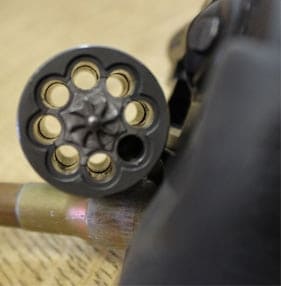 If you carry a .38 LCR, or even a LCR-357, then you should practice with it. It is the only way to build muscle memory and the type of proficiency you might stake your life on. Remember, it is one thing for the gun to work effectively, but—will you?

Some will unload their weapons and practice drawing and holstering. Some practice dry firing, though the Internet boards are full of stories of stupid and tragic accidents. You could practice with live ammo, and (of course) you should, but there is the expense. The .22 LR answers that question. While it doesn’t give you the exact physical recoil response, it does allow you to shoot live ammunition.

That said, there aren’t many conversion kits to allow for multiple calibers in revolvers. So you might need to pick up a second gun. For those who carry any of Ruger’s LCR series, the LCR-22 is the perfect match. And it is a really good match for anyone carrying a hammerless snub-nosed revolver.

It feels like all of the other Ruger LCR guns. That’s obvious. The LCR is light. It is compact. The Hogue grips are superb, if a bit bulky for my concealed carry tastes. Though it is only a three-finger grip, the texture of the Hogues allows for a great grip.

At 15 ounces it is light (though the heaviest of all the LCRs because there’s more metal in the cylinder). The steel barrel insert is housed in an aluminum frame. That is joined to even lighter polymer. While I’m leery of aluminum-framed guns, the LCR series seems to be put together well. And even if the LCR-22 rattles, the cylinder locks up tight with the barrel. That’s what matters.

It shoots great. As you would expect with the .22 LR, the LCR-22 has no real kick. Super fast rounds (like CCI Stingers) will give it just the slightest bit of muzzle flip—just enough to require a quick re-sight.

And speaking of sights… The blade on the front end is big. It lines up with a channel in the frame. While this doesn’t offer much in the way of adjustability, or precision, it is sufficient. This isn’t a target gun. I consider all of the LCR series, and all snub-nosed revolvers to be close range, defensive weapons.

I had a hard time grouping shots at 30 feet, though I could keep most on target. From 15 feet, groups were predictable within a three-inch diameter.

At closer distances, the Ruger LCRs all point well. The quality of their mechanics ensures more than adequate accuracy, dependable performance, and reliability.

I put four different flavors of CCI .22LRs through the LCR-22 without a hiccup. I spent the better part of an afternoon shooting through a brick of Remington’s bulk rimfire rounds. I had one dud. That’s it. Every other round, more than 700 of them, ran fine.

I thought I had this gun pigeonholed. I thought the LCR-22 was a great practice gun. But a good friend of mine says no—that he would carry it. He added a qualifier. I think what he actually said was “This would be my carry gun, if I were a hundred pound woman.”

He has a point. This Ruger LCR-22 weighs nothing. It holds eight rounds. Though the .22 LR is a diminutive little round, there are some hyped up .22 LR cartridges that can do some serious damage. When you consider the negligible recoil—and how that might affect shot placement—those eight .22s don’t seem quite as ridiculous, defensively.

But for a tiny person. I still think that if you are going to carry a concealed handgun, you should carry as much gun as you can use easily and effectively. For me, that would be a LCR-357. My wife, who weighs less than half of what I weigh, would never carry a .357. I can’t even get her to shoot one.

That’s another selling point for the LCR-22. If I had a LCR-357 that I wanted to use as a teaching tool, I could only drop down to the weakest of .38 caliber rounds. While that isn’t all bad, it isn’t as good as it could be. The low-noise variety .22 LRs, like the CCI Quiet-22, are perfect for the LCR-22. With a muzzle velocity just over 700 fps, and a serious reduction in the noise pollution, these types of rounds allow folks to shoot in areas where noise would be a concern. They also aren’t as scary sounding, which makes learning about guns more enjoyable to those averse to loud noise and/or heavy recoil.

And if you want to carry the LCR-22, check out CCI’s hypervelocity rounds. After all—eight well placed small bullets can do the job.

Check out the LCR-22. The little gun won’t disappoint.