Battle of the 1911s: Ruger SR1911 vs Springfield Range Officer

Usually when I pit two guns together for a side-by-side shoot off, I’m trying to decide which one I like more.

Smith & Wesson, Ruger, and Taurus all make .357 revolvers with six inch barrels.  They all do the same thing—so looking at the differences in style, form and function makes sense.  But the differences make each of those guns unique.  What about 1911s?

To the uninitiated, all 1911s must look exactly the same.  But they’re not.

Last year there were several 1911s released that sell for less than $1,000.  A couple of them aspire to a level of quality typically reserved for the next tier up, and that’s what makes the Ruger SR1911 and the Springfield Range Officer worth second looks.

This is a carry gun, plain and simple.  Yet there’s not much about this gun that’s plain.  Ruger has stuck to the basic functionality of the 1911 with their version, but they’ve dressed it up a bit in low-glare stainless. 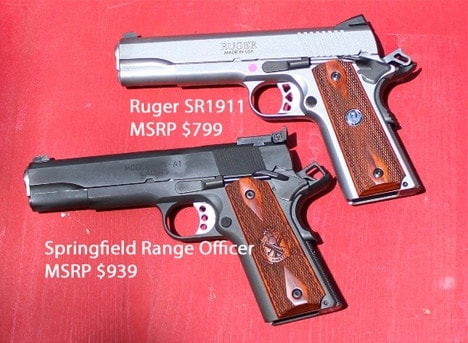 The SR1911 is a great option for every day carry.  It is a reliable weapon that is designed for fast target acquisition and confident shot placement.  While it might make a decent platform for modifications, it isn’t a competition gun.

Springfield Armory has taken the opposite approach.  Instead of taking a basic 1911 and dressing it up, they have taken a competition 1911 and dressed it down.  Its looks are humble, but its performance is anything but.  The fit and finish of the Range Officer rivals that of much more expensive 1911s.

Yet some balk at the idea of carrying it.  The target sights, for starters, are not carry-friendly.  The giant rear sight can make finding a holster more complicated, and the flat black-on-black of the sights isn’t easy to pick up quickly.

The Ruger draws easily.  I like Novak sights.  Once I was dialed in with the Ruger, I had no trouble placing shots.  This is more difficult than it might seem, as I switch up ammunition a lot when I do reviews.  I like to see how guns do with various loads and bullet shapes, and the differences effect shot placement. But everything was in the vital range.  I could empty a magazine into an eight inch target with consistent speed.  And when I slowed down, my groups stayed around two inches—but I had a hell of a time punching bull’s-eyes.

No contest.  The gun is the most accurate 1911 I’ve ever shot—and I’ve shot much more expensive 1911s.  I have it dialed in perfectly for me, and I can hit what I’m aiming at—exactly—consistently.

And I carry the Range Officer.  But I’m comfortable with the sights and have modified my holster so the strap doesn’t catch on the rear sight.

I haven’t put either of these through a true torture test.  Because the Range Officer is a tighter fitting gun, I’m more meticulous about cleaning it.  The SR1911’s loose fit suggests it could take more abuse before fouling would be an issue.  And the stainless steel is easier to maintain.

Is there a point at which they can be compared?  They are both 1911s.  That’s about it.  But the contrast is so compelling.  They couldn’t be any more different.

Maybe you need both.