I know most of our minds are already made up.  I carry an automatic pistol when I carry a gun, but the revolver won’t go away.   In fact, it’s doing just the opposite.  It is thriving.

There are really good reasons for choosing a revolver.  Most are very simple in their design.  Pull the trigger and the gun goes boom.  With no external safeties, a loaded revolver is easy to operate.  Compare this to a single-action-only automatic, like the new Colt Mustang, and you’ll see how easy a revolver is to use.

But what should be a very basic, functional design is still filled with options.  Here are two from Ruger that illustrate the point.

At first glance, these guns seem very similar.  Both are chambered in .357 magnum (about as good as it gets for hard-hitting concealed carry rounds).  Both have short grips and timeless snub-nosed lines.  Both hold five rounds in their cylinders.  But that’s about where the similarities stop. 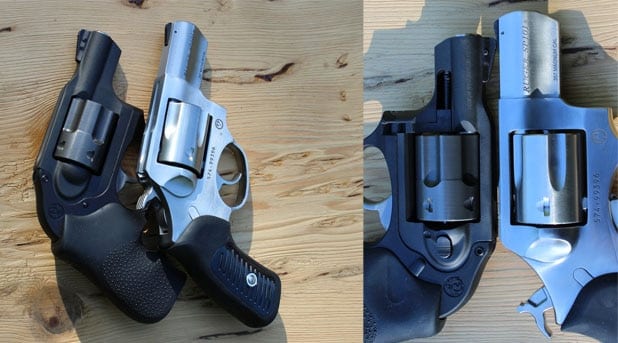 The LCR has no external hammer.  It is built from a mix of stainless steel, blued steel and polymer.  The whole package, because of the polymer (which they have yet to find a way to cover in chrome), is black.  And the Hogue grip is heavily textured with nice finger grooves.  The whole package is very light, just over a pound empty. The barrel is just under two inches long.

The SP 101 is a beast.  It is mostly stainless steel.  There is extra steel in the barrel and the frame.  If you look at the barrel profile, you’ll see that it is over-built.  This makes the SP 101 heavy, more than a pound and a half.  It has an external hammer.

The SP 101 comes in a hair longer than the LCR.  The grip is a bit longer and the barrel extends more than a quarter of an inch farther.  The Hogue grips on the LCR feel much more ergonomic than those of the SP 101, but it is impossible for me to get my pinkie on the grip.

Carrying the LCR and the SP 101

A fully loaded SP 101 comes in over two pounds.  It’s a chunk, and you’ll feel it if you carry it much.  And it has a hammer — which could be an asset or a liability, depending on your skill level.  The SP 101’s hammer spur, the functional piece that makes cocking the gun so easy and efficient, is also highly likely to get hung up in clothing.

It can be even worse if it is down in a bag, like a purse (or a man purse).  In fact, I’ve developed an unconscious habit of drawing the SP 101 with my thumb already on the hammer (which makes me much more dangerous to myself, honestly).

The LCR is lighter, but not by all that much.  The main distinction has to do with the lack of an external hammer.  This makes concealing the LCR much easier because drawing is easier.  But what about aiming a double-action-only gun?

Shooting the LCR and SP 101

The SP 101 fires in double or single-action modes.  The single-action trigger pull is clean and breaks around seven pounds.  The double action pull is quite heavy, coming in above 11 pounds.  It is fine for me, as I tend to have a heavy hand, but it would be a bit much for a smaller shooter, and I even have trouble staging super accurate shots from the double action.  I simply pull so hard that I can’t hold the sights on a bulls-eye.

The LCR is different.  The trigger feels different.  Because there is no hammer to move through a dramatic arc, the trigger has been reconfigured.  The pull allows for a solid and smooth pull that is easy to control.  I can stop the pull right before the break, every time.  So in effect, the LCR has a light double-action pull, and is almost as accurate as the single action SP 101 (once you have some practice with the pull). 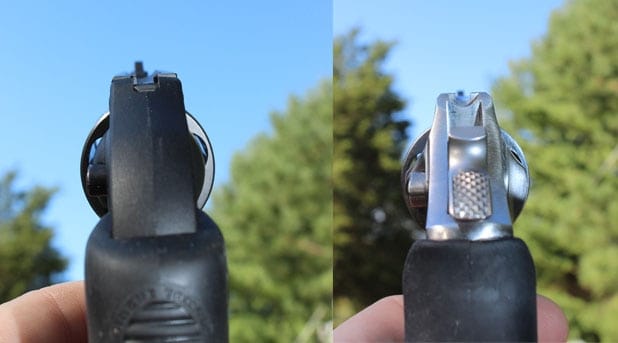 The sights on both guns are very similar.  I can acquire targets more quickly with the SP 101, but its sights are not as clean as those of the LCR.

There’s more to consider than just these two options.  So many shooters have ditched the revolver in favor of the polymer mouse guns.  But we’re talking about functional, concealable .357s that won’t jam, fail to feed, or shoot .380 ACP.  And there something to that. 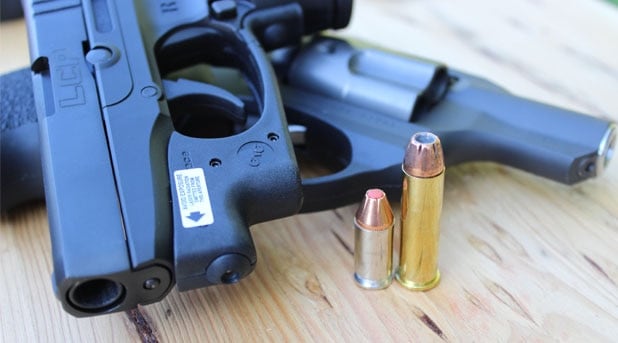 My mind was made up before I started.  I don’t care for double-action-only guns.  I prefer the SP 101.  I like having the added security of an external hammer.  And I don’t mind the added mass.  The weight of the SP 101 helps with the recoil.  It still kicks, but no where near as hard as the LCR.

Yet the LCR is a fantastic gun.  I really like the way Ruger has addressed the trigger pull.  And it is the first hammerless revolver I’ve shot that I wouldn’t hesitate to carry.

But it feels a bit light.  I worry that it wouldn’t stand up to the number of rounds I put through my guns.  If it were only a carry gun, and I had another for practice…maybe.  But the SP 101 is a classic, and it is over-built.

Even with the hammer, it is a good choice for concealed carry, and now Ruger is making an SP101 without a hammer, for those of you who want the best of both worlds.