The invention and production of the Colt 1873 Single Action Army Revolver, better known world-wide as the Peace Maker, revolutionized pistol shooting in all arenas.  The owner of Colt firearms, Samuel Colt, had a slogan that was used as a rather effective marketing tool, “God created man but Sam Colt made them equal.”

I have never had the honor or the pleasure of owning a Colt 1873 Peacemaker, much less being allowed to fire one.  I have, however, done what I could to honor the Colt revolver tradition through the acquisition of what I refer to as Sam Colt’s Snakes.

The Colt Python, King Cobra, and Anaconda are his snakes.  I chose all three with 4” barrels and stainless finishes.  They’re all equipped with double-action triggers.  You know how it is, you just have to have stuff like this in a matching set.  All I lack is the walnut case lined with red velvet. 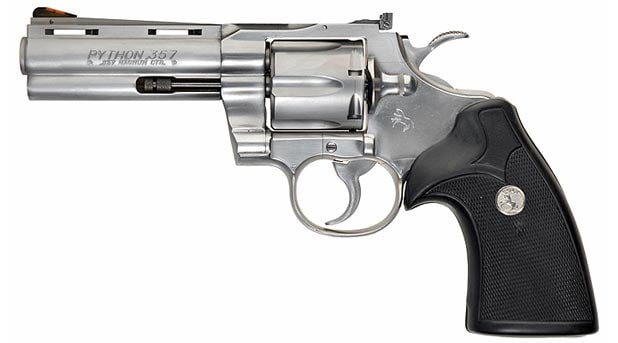 The Python was my first purchase in this line of revolvers.  It was fondly referred to as the “combat magnum” and was hailed as one of the finest production revolver ever made. Available in stainless steel, mine was a 4” .357 magnum.  It was also available in a larger 8” barrel and the much smaller 2.5” barrel.  This large frame revolver handled recoil well and was amazingly accurate.

When it was first introduced in 1955 it was intended to be a .38 Special target revolver. It’s designed with a full barrel underlug, which helps distribute weight evenly along the barrel in turn tame muzzle flip. It also had a ventilated rib running atop the barrel, and adjustable sights. But what made it really unique are its tight tolerances and the cylinder lock up. When the hammer is fully cocked and the trigger is pressed, the cylinder will lock ensuring the cartridge is stable as it’s charged.

Although many law officers carried it in its heyday, the only criticism one could say of the “Rolls-Royce of Colt revolvers” is at 2.5 pounds it’s a heavy carry gun.

Unfortunately, it was pulled from production by Colt in 1999. 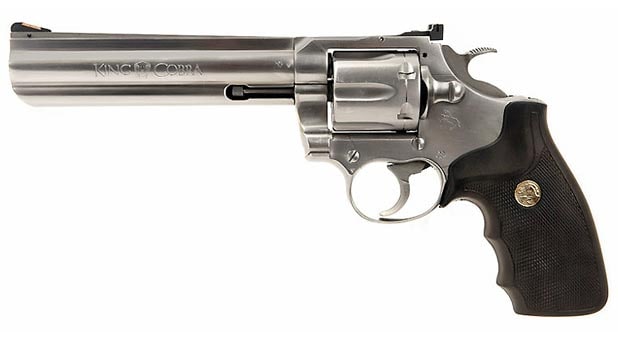 The King Cobra was my second purchase in this line.  This is what I lovingly called my “spitting cobra” because it, of course, “spit lead.”  I had this also in a stainless finish with a 4” barrel in .357 magnum.  Like the Python, I was very fond of this revolver and its accuracy was never in question.

When it was introduced in 1986 and built on a medium frame in turn intended for self-defense and law enforcement. Like the Python, it featured a vent rib atop the heavy barrel, a solid ejector spring cover that ran the full length of the barrel, and made of durable carbon steel. Although it was smaller than the Python, it was also able to tame the heavy recoil of the .357 cartridge quite comfortably.

Colt halted production of this model in 1998. 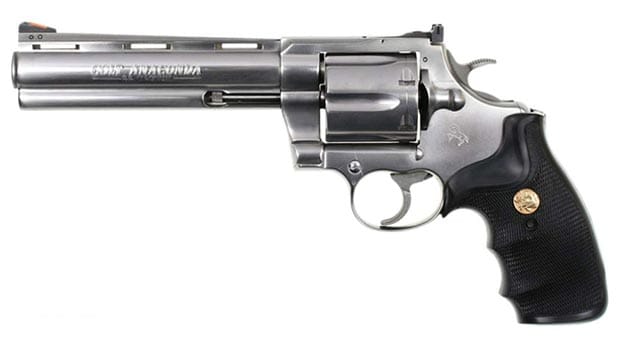 The Colt Anaconda finished my Colt Snake collection.  Unlike its sister models, it was chambered in .44 magnum.  It is everything the name claims it to be, an anaconda.  Strong, heavy, and deadly dangerous. This huge revolver, while absolutely impractical for a carry, law enforcement, or concealed revolver, is spectacular for target or large game hunting.  Recoil was unnoticeable and the grip filled my large hand very well.

The Anaconda was introduced in 1993 to compete against the Smith & Wesson Model 29 in .44 Magnum (or the Dirty Harry gun) and Ruger’s Redhawk and Blackhawk revolvers. Actually, the Anaconda is very closely related to the Python. The main difference that the Anaconda weighs more, but, of course, it fired a heavier load.

Unfortunately Colt ceased production of this amazing revolver in 1999.

Though, tragically, Colt’s Snakes have not been in production for quite some time, they are still readily available to the persistent purchaser.

I encourage anyone who has a love for antique Colt revolvers to seek out and obtain these more contemporary Colt revolvers.  They are no longer in production and at some point will be just as rare and desirable as the historic Peacemakers that allegedly made all of God’s men equal.