The K2 .45 ACP is one excellent CZ-75-style handgun you need to handle.  You may not know it, but you do.  Manufactured by Sarsilmaz of Turkey and imported by the European-American Armory, the K2 is a magnificent high-capacity big-bore handgun. 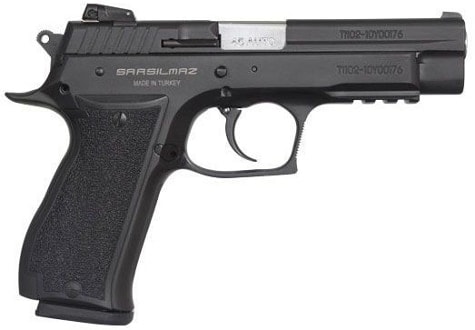 Unlike the vast majority of CZ-style pistol manufacturers, Sarsilmaz actually has a license to manufacture their copies from CZ.  This means they are made to a much higher standard than your average clone and that is reflected in every aspect of these guns in their fit and finish.  The slide-to-frame fit is superb, without the slightest hint of play, let alone rattle.  The K2 is not entirely a clone of the CZ-75, as Sarsilmaz has done more than scale it to chamber .45 ACP.  The slide and barrel take a page out of SIG’s book with regard to lockup.

These guns also have a terrific reputation for accuracy, a result of the excellent fitment as well as the factory adjustable sights.  One nice thing about the sights is that the front sight dot is significantly larger than the rear dots and they make shooting this gun fast relatively easy.  Also the trigger is very nice for a company that makes military arms, and is as good and possibly a little cleaner than a factory CZ trigger, out of the box, anyway. 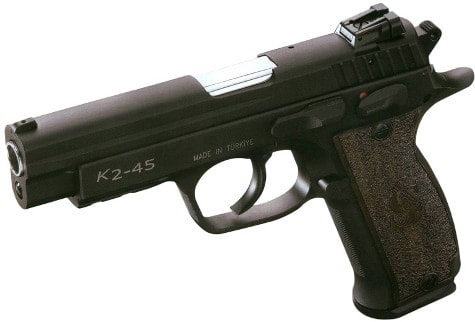 Recoil when shooting is downright pleasant.  The K2 is an all-steel-framed handgun that weighs in at 40 ounces unloaded.  That combined with the full-length grip and 4.5-inch barrel and there’s no mystery as to why the recoil is so easy to manage.  The thin, textured rubberized grips allow you to get a strong hold of the gun and the frame is serrated on both the front- and backstrap.

The controls should be familiar for anyone who’s handled a CZ-75.  They’re right-handed with a generous slide stop and safety.  The gun can be carried double-action or single-action cocked-and-locked, with the safety just above the right thumb on the left side.  The magazine release is easy to find and manipulate.  Magazines aren’t terribly expensive, often around $25 and manufactured by Mec-Gar.  Other accessories, well, good thing they make generic holsters.

The K2 is also manufactured in 9mm, .40 S&W and 10mm although those models are currently waiting to be imported.  We expect them to be very popular.  If anything, the main drawback of the K2 is its growing popularity, and like many strong buys, they’re getting harder and harder to find.

If you do come across a K2 don’t be surprised to see that the pricetag is under $500; sometimes well under $500.  And snatch it right up because if you wait, someone else will beat you to it.

The K2 is an amazing pistol that while somewhat more expensive than other handguns we feature as bargains, could honestly sell for hundreds of dollars more and still be well-priced and very competitive.

If you’re in the market for a full-size .45 for the range or for the home, but aren’t looking for something common, keep your eyes peeled for the K2.  It will be the gun that everyone you shoot with will want to shoot, too.

Photos by Cheaper Than Dirt and CENGİZ.