The Smith & Wesson Model 627 was introduced in the early 1990s as sort of an upgraded version of the classic Model 27—a revolver introduced during the Great Depression. Shortly after the 627 was introduced, the firearm-shooting public quickly welcomed it and, like the Model 27, it has become quite popular.

I have had the opportunity to shoot a number of 627s over the years, but this review is based on that general background supplemented by shooting the V-Comp Model with a five-inch barrel for the BallisticsByTheInch.com tests of both the .357 Magnum cartridge as well as the .38 Special cartridge. It was tested both with and without the compensator attached. 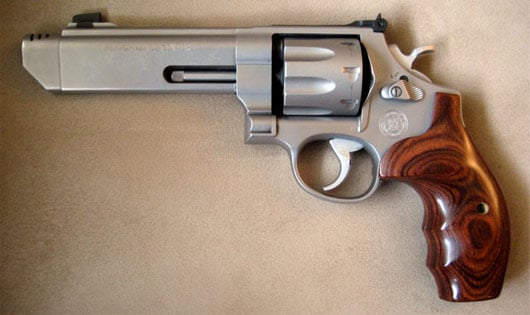 Smith & Wesson Model 627 and its variants

Mainly what sets the 627 apart from the Model 27 is it has a stainless steel construction and features an eight-round cylinder. Although the one under review is the V-Comp model, there are a number of variants with differences ranging from being set-up for moon clips to the style and material of the grips.  The smallest of the models was the one with the 2.625-inch barrel and weighs about 37 ounces. While the heaviest is the V-Comp weighing in at 47 ounces. 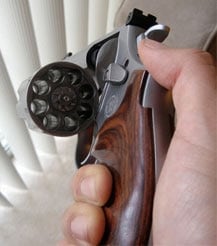 However, all the models are very well made, as you would expect from S&W. The fit and finish are excellent. The trigger has always felt good to excellent, and actually seems to get better the more they’re used. And as far as I know, they have all had adjustable rear sights and some variety of colored-insert front sight.

The Model 627 is a large and robust revolver and is very capable of handling a steady diet of full-power .357 Magnum loads. The substantial weight helps manage recoil and the V-Comp also helps considerably because the muzzle compensator would actually redirect a portion of the combustive gases upwards to counteract muzzle flip—trust me, you’d notice.

Curiously, our testing of the V-Comp showed that it also performed better with the compensator on in terms of bullet velocity. Although it only added 0.625-inches more onto the barrel, with some of that distance was made by the compensating cuts.

I was a little surprised by this, but it consistently gained about 50 fps overall the .357 Magnum ammunition. Shooting .38 Special rounds, the compensator did not show the same advantage and in some instances performed worse than shooting the gun without it in place.

It was very accurate—about as good as any full-sized handgun I’ve shot. The Model 627 also has excellent ergonomics making it is easy to shoot it well. Also, the longer barrel made it feel balanced and more suitable for target shooting.

Shooting freehand the BBTI team wound up with three-inch groups at 25 yards and that should be possible for any good shooter using this gun. Bench-rest shooting will likely offer even better accuracy at 50 yards or longer.

Since the 627 has been around for almost 20 years, there are plenty of accessories available. Just as there are a lot of used guns in this model line. The Smith & Wesson quality for all the 627 guns is quite good.

I don’t recall of any major problems with them, meaning that if you want to save some money, then you should be able to trust that the gun is in good condition and will give a lifetime of service. Depending on which one you choose, it should serve very well as a target gun, as a home defense gun, or even as a carrying gun.