Smith & Wesson revolvers are nothing short of legendary. Not too long ago, they reintroduced the Model 14 .38 Special revolver as part of its classics line. The line is sort of a homage to what they consider their legends, and like the others, the Model 14 is no slouch.

Originally it was manufactured from 1947 to 1981, and had a short run 10 years later. The Model 14 uses S&W’s K-frame design and it is, essentially, a Model 10 with a six-inch barrel and adjustable sights—a target gun at heart.

The revolver is of a double-action variety, although firing it in double-action proved a bit difficult as the trigger broke at a heavy 13 pounds. The single-action pull of four pounds was much more user friendly.

Speaking of the trigger, it felt nice and ran smooth. Though a bit wide, it was comfortable enough. Inside the trigger guard there was plenty room, but I wouldn’t consider it unnecessarily spacious. I can see using the gun with winter gloves on, as long as it’s set for single-action. Otherwise, there may not be enough room.

S&W thought ahead and bead blasted the top of the classic K-frame in order to reduce possible sun glare. Any of you who have shot a nickel-plated revolver at three in the afternoon know how that goes.

S&W ribbed the top strap of the barrel for the same reason. The serrated hammer was effective and nice to look at. The rear sights are fully adjustable but also removable (should optical sights be in the gun’s future).

The gun weighs in at 35 ounces, so it’s neither extremely light nor overly heavy. Though it would make a nicer trail gun rather than an everyday carry. S&W recommends the Model 14 for most everything, including competitive shooting, and while it would make for a fine competition gun, there is a more advanced Target model available.

Otherwise accuracy is fine. It’s been known for producing groups no wider than 1.5-inches at 20 yards.

The grips are S&W’s own Magna wooden units that feature effective checkering and a square butt. Nothing fancy, but they look really handsome and are comfortable in the hand. Can’t really ask for much more out of grips.

I am always a fan of .38 Special revolvers because of the availability and price of the ammo. .38 Special rounds can be found just about anywhere, and won’t break the bank for a box of them.

Though, what might hurt the wallet a bit more is the price of the pistol itself because Smith & Wesson isn’t known for producing cheap handguns. MSRP is $909, but can be found online for as low as $700. 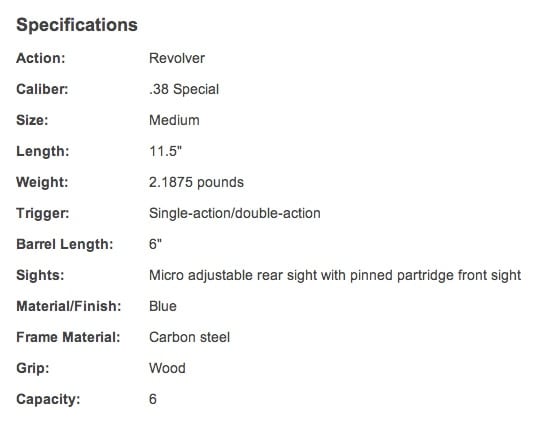