Shoot Around Corners Without Being Seen: Corner Shot (VIDEO)

The Corner Shot weapon system’s objective is similar to the rustic periscope rifles from Australian Sergeant Bill Beech’s WWI butt stock adaptation, used frequently in the 1915 Gallipoli Campaign, but that is where the similarity ends.

Breech’s WW I ‘gadget’ was a raised stock rest and trigger apparatus coupled with a periscope for trench warfare, cumbersome but effective when wedged into sandbags, positioning the ANZAC ‘marksman’ down in the trench, out of harms way, aiming through the periscope.

The Corner Shot armoured device is much more ergonomic and permits SWAT, Special Forces and military in 15 different countries to ‘see’ around corners. They can perform surveillance, sight in and shoot successively presenting no human target for urban terrorists or criminals. With the Corner Shot system, hands remain on the weapon at all times permitting rapid return fire from seated, standing and crouched positions with significantly less risk for the shooter. 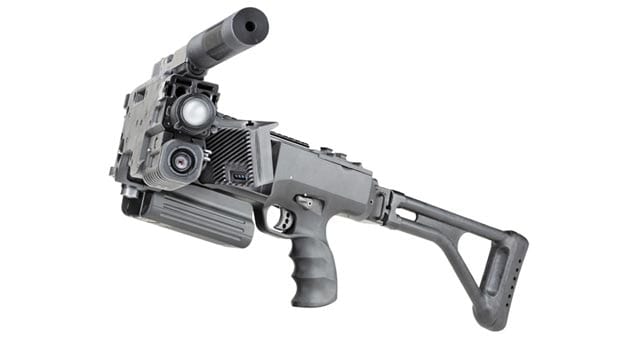 Lieutenant Colonel Amos Golan, along with another senior officer, Asaf Nadal from the elite units of the Israeli Defence Forces are the co-founders of Corner Shot LLC, an American manufacturing company headofficed in Miami, but maintains offices in Israel. However, Funding for the enterprise was solely American.

Mr. Golan serves as the joint CEO and markets the device to 15 different countries only selling into military and law enforcement agencies, and the products now have worldwide distribution through an agency network.

Evolving camera technology coupled with Corner Shots patented traverse mechanisms, abetted by the global terrorist risk, have created a definite market with new end users’ countries displaying strong interest, with the most recent being the British Ministry of Defence.

The Corner Shot System is adapted for a variety of popular in service pistols used by Special Forces (those include ones made by Beretta, SIG, Glock, and CZ).  This permits existing forces to further standardize their own weaponry for parts, armorers and technicians as well as developing a quicker learning curve. The introduction of an AR 5.56mm version moves the devices purported range up to 250 meters.

The System also provides accessories for audio and video transmission, infra red and visible lasers and tactical lights as well as detachable cameras.  A 40 mm grenade launcher, report suppressors and rubber bullet models fill out the accessory line. Accessories traditionally produce the most profit and this is apparent with the Corner Shot lines direction.

The stock camera in the device is a LCD 2.5 inch color monitor that is transmission ready mounted on a standard universal accessory rail.  Your current monitor will be scalable as advancements dictate so that all models will contain current imaging equipment for their system.

Plans for the future at Corner Shot include the US M-16 to dramatically increase the firepower with the capability of remote firing for traps or ambushes using video transmission.  Not only that, but prototypes of the anti-tank Corner Shot are being tested. Amos Golan has come up with a unique firing system, something much more than a gun.

Sorry, but the systems will not be sold to individuals.