We had a phenomenal time at SHOT Show this year.  There was just so much to shoot, and only one day to shoot it all.  Well, you know we made sure to hit up the Ruger range, and there was so much going on there we had to stay a spell.

They had their new SR-22 pistol out there, and there was a longer line for that little guy than anything else.  While waiting for my turn, I handled the also-new LCR in .22, and instantly took to it.

That little revolver had so little recoil and such a nice trigger, particularly for a rimfire revolver, that there’s just no way we can’t say unkind things about it. 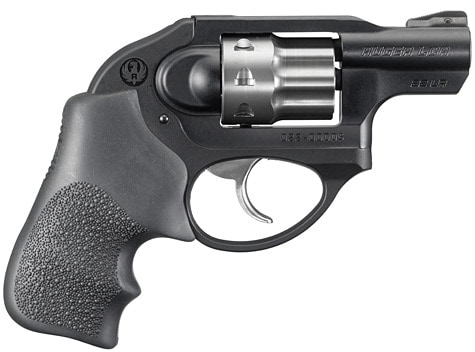 It’s an accurate and fast shooter, something you really could just spend all day shooting and not get bored with.  The sights were natural and everyone was grouping really well with it, even shooting it rapidly.  It was late in the day, and that gun was filthy, too, and it didn’t have any problems loading, shooting, and ejecting at all.

As either a kit gun, a first revolver, or an inexpensive trainer for a hotter-loaded LCR, it’s pure win.  If we were to change anything about it we’d add a front fiber-optic sight and ship it with a free box of ammo.

The SR-22 finally got set down long enough for us to paw at it, and it’s nice, although pretty different.  The sights are good, for being plastic; they’re replaceable if that’s not acceptable.  They are adjustable.  The manual of arms is not exceedingly similar to that of most guns.  The safety’s upside-down, it’s up to fire, and the magazine disconnector is… a matter of preference. 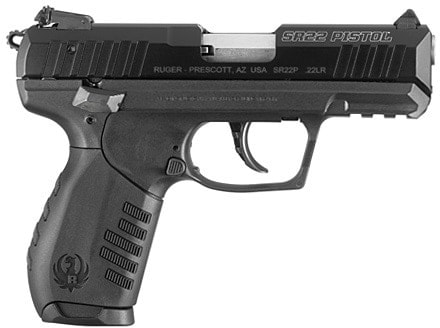 We found that it’s quirky.  If you slam the magazine in, it will close the slide on you.  If the trigger isn’t fully-forward when it’s loaded, it doesn’t re-engage unless you tap-rack-target.  (The trigger is disconnected when there’s no magazine and it can stick to the rear, especially when it was as dirty as this one was, nobody had their finger on it while loading.)

If you don’t slam the magazine in, then you risk not seating it, which won’t reconnect the trigger, and when you expect a bang, you get a flop as the trigger rolls back.

All that said, many guns have, er, unique manuals of arms, and once we figured this one’s out, we had it running like a champ.  It’s just as lightweight and more compact than the LCR in .22, and recoils even less.

We’ll have to put a few thousand rounds through one ourselves to make any sweeping declarations, but so far, if you don’t mind quirks, this gun might turn out to be one of the best compact .22 autos made to-date.  It’s not like the Marks and 22/45s don’t have quirks and Ruger will never stop making those.

They had an SR-556E for everyone to take for a whirl, too.  And you could do a lot worse.  It’s a soft-shooting AR carbine if ever there was one.  We won’t say it’s because of the piston system, although that may have had a part in things.

The SR-556E is a little heavier than many ARs out there, but not so much that it would bring down the recoil quite that much.  No, Ruger went and fixed this particular rifle up for the show, by adding an optic, some back-up iron sights, and a nice, long muzzle brake with four of the loudest baffles they could cut.

It’s a very nice AR, surprisingly something competitive with custom manufacturer’s piston-driven builds but at production rifle prices.  If you have a grand and a deep-seated fear of zombies, the SR-556 should be on your short list.  Also, we think it’d be more than up to the task of non-zombie-related shooting, as well.

I discovered just how loud their SR-556E was when I was drawing a bead on a popper a hundred yards away; I’d tagged it four shots in a row, I was going five for five.  Then the other shooter pulled his trigger and knocked me off my seat.

I was shooting the Ruger 77/357, and let me tell you, that rifle will be mine.  At a hundred yards with iron sights I was making steel ring far more often than not, I think I missed two shots and for some reason, I had a lot of alone time with Ruger’s ammo.  All said and done, that bolt-action rifle changed what I believed you could do with a pocketful of .357 Mag.

The action was snappy, the controls were perfect, and the trigger, while not on the level with some of the competition guns out there, was clean and predictable.  The sights are a diamond-dot configuration, adjustable, and fast.  If you’re a fan of pistol-caliber carbines, this one will give any levergun a run for its money.

And of course we fondled the Ruger American Rifle.

It was a joy.  And something deserving of an article of its own.