Shotguns vs Handguns for home defense: Which is the better fit?

The guns that were put head to head were a Remington 870 12 gauge and a Makarov PM in 9x18mm. (Photo: David LaPell)

If you were to ask five different self defense instructors about what weapon you should use in your home for personal defense, you’ll likely get five different answers. You can bet though that one will most likely recommend a shotgun and another a handgun, but of the two which is better for you and your needs?

The shotgun has been touted as a defensive weapon of sometimes mythological proportions and, while it is formidable, the shotgun has drawbacks. This is something every shooter, no matter how experienced, needs to know.

First of all, a shotgun is not a magic wand, dispatching evil by merely pointing it in the direction of the bad guy. Shotguns with defensive loads like buckshot really do not cover a large area, only a few inches at 7 to 10 yards with a short barrel and improved cylinder choke. This is hardly the wall covering shot pattern a typical Hollywood film depicts. And no, it won’t send someone flying through the air either.

What a shotgun does do however is deliver in a single load of buckshot, no matter if it is 00 or #4 buckshot, much contains more lead and projectiles than any single handgun round can deliver. Depending on the size of the buckshot load you’re using, you can deliver anywhere from eight to 27 pellets or more on target in one shot. The shotgun is a fight stopper and it can do this very quickly. 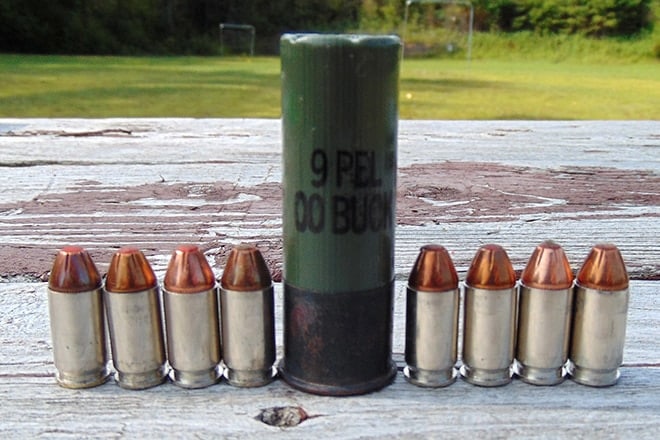 Nine pellets of 00 buckshot, delivered in one round, compared to nine rounds of 9x18mm, delivered consecutively. (Photo: David LaPell)

If you’re worried about the recoil of a 12 gauge shotgun being too punishing, don’t overlook the 20 gauge or even in some cases, a .410 option. Many of the same models that are popular in 12 gauge like the Remington 870 and the Mossberg 500 can be found chambered for smaller rounds and, when loaded with buckshot, these are still more powerful round-for-round than any handgun.

When it comes to the specifics, a personal defense shotgun should have a short barrel, 20 inches or less. It may also be a good idea to install an extended magazine, but that’s really not necessary. Of course pump shotguns are the most common, but there are reliable semi-autos these days too. If you don’t mind the limitations, even a side by side coach gun is nothing to sneeze at. Also, don’t ignore the single barrel, single shot shotguns in your home defense plan. These can be a cost effective option for around only a $100 or more.

So now we come to handguns. If you think that they are easier to shoot compared to a shotgun, well, they are and they definitely are not. Sure the average handgun in 9mm or even a .45 ACP doesn’t have the shoulder thwacking recoil of a shotgun. But what it does have is a shorter sight radius which requires serious practice to be able to shoot well.  Practice is the word with any handgun.

Where the handgun outshines the shotgun for personal defense in the home is that when it comes to movement. Moving around an enclosed area like a hallway is a lot easier with a handgun than with a shotgun with its longer barrel and size. Also remember that a long barrel is something a bad guy can grab, if you’re unlucky. 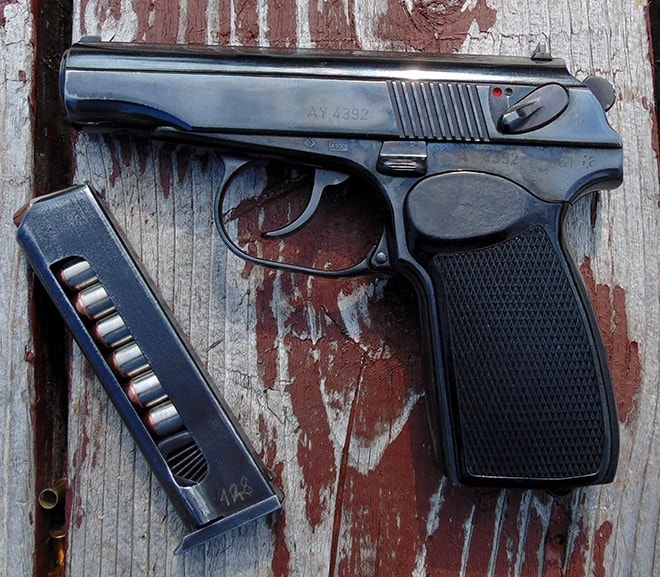 If you did decide to choose a handgun for the defense of your home, you could do a lot worse than picking a Makarov PM which are known for their reliability and accuracy. (Photo: David LaPell)

Having a handgun also means, in most cases, more ammo capacity and likely more spare magazines or loaders on your person. When it comes to speed, reloading a semi auto pistol beats any shotgun. Loading rounds into a tube will seem like an eternity when you’re in a rush versus simply swapping out the magazine of a pistol or even a speedloader of a double action revolver if you practice enough.

I decided to take my Remington 870 and my Makarov PM, my favorite carry gun in warm weather, to the range to see how they fared against one another. I started at the 7-yard line. I loaded the Remington 870 with a 2.75 inch round of nine pellet 00 buckshot and the Makarov a full magazine of eight rounds and one in the chamber. This gave me nine rounds from a handgun against nine pellets of buckshot.

The groups were fairly close, much closer than one might expect, but the thing to remember is that I delivered all of those pellets from the shotgun at once, while the Makarov was a rapid and steady fire affair but it still took several seconds. The 9x18mm Makarov round is on par with .380 and is a mild round compared to .40 S&W and .45 ACP, so I’m apt to think that a group from a stouter round would be larger compared to the shotgun. 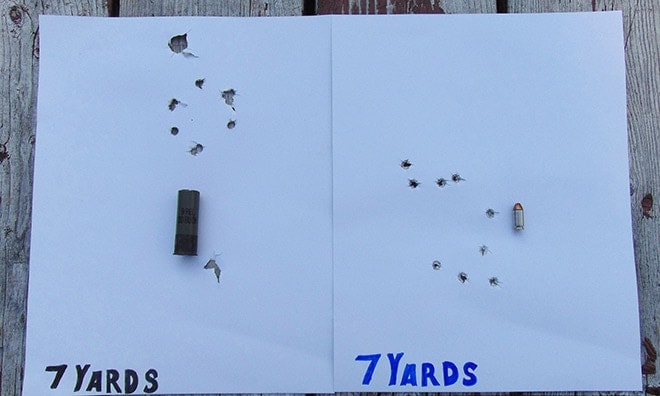 At 7 yards the load of 00 buckshot grouped tighter than a magazine worth of rounds from the Makarov PM. (Photo: David LaPell)

I then brought the shotgun and the Makarov back to the 15-yard line. The two groups started began spreading out at this distance with the 00 buckshot really opening up but still keeping all the pellets within a radius of 12 inches. I fired the Makarov at the same brisk pace I kept at the 7-yard line. The nine round were still fairly closely grouped. Again, keep in mind that the Makarov is a fairly pleasant shooting pistol with low recoil due to its all steel frame and mild caliber.

The point of the exercise was to see what both guns could do at similar ranges. The first verdict is you can do more with one well placed round of buckshot faster than you can empty the magazine or cylinder of a handgun. The second verdict is that a handgun, with skill acquired through practice, can be effective at the same practical ranges as a shotgun inside a home. 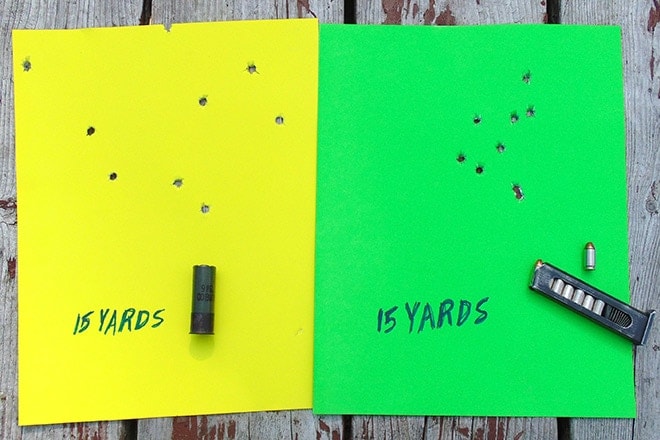 At 15 yards the 00 buckshot spread out more than the group from the Makarov but still held a fairly decent pattern. (Photo: David LaPell)

A word on penetration

So what about penetration? It was a pretty moot point to test against drywall since it is a fact that even light birdshot can go through a couple layers of drywall. You have to still be aware of your surroundings no matter what you’re shooting. Both handguns and shotguns will send a round through a wall into the next room with ease, so take that into consideration no matter which you choose.

Which would you pick? The decision is ultimately yours. Why not both? Well, that’s probably the smartest option, but not really in the spirit of this exercise.

If you’re looking for advice on a gun for your home, something you wouldn’t necessarily plan on carrying outside, I recommend a shotgun. Whether it’s 12, 20, or even .410, shot for shot, no handgun can match what a shotgun delivers — as long as it is buckshot.

Shotguns are also very cost effective. You can pick up a cheaper defensive shotgun like a Maverick 88 for less than $250 and a Remington 870 for under $400. You can find used shotguns often for around $200 or less in some cases. Also if you have a shotgun for hunting, many have barrels that interchange. For a mere $100 or so you can turn your hunting gun into a defensive shotgun in a matter of moments.

Handguns are of course great for personal protection, if you are going to take the time and expend the energy to get good with them. You still need to practice with your shotgun and pattern loads at different ranges from up close to at least 15 yards. But in the end it’s the simpler and usually better choice.