Gun Review: The SIG 522 is more than just a training rifle 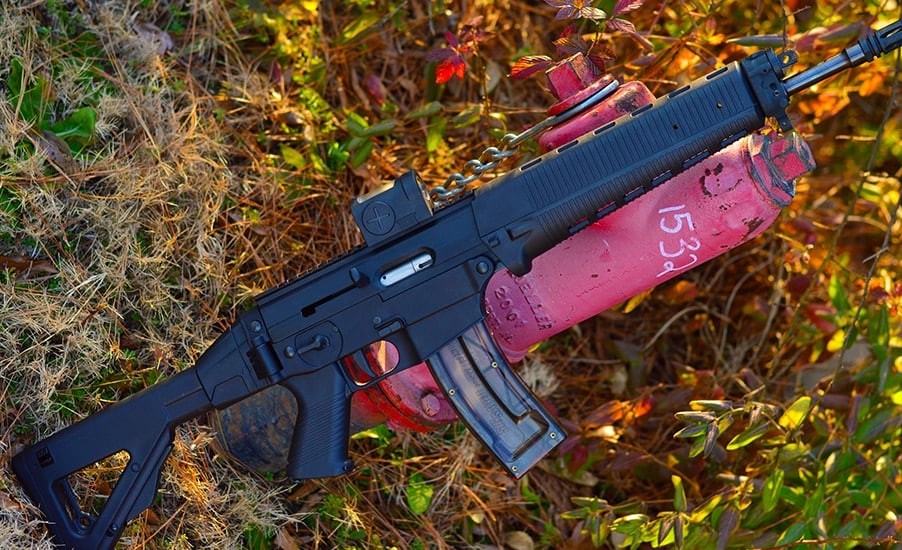 Thirty rounds of .22 LR in a Swiss rifle, perfection. (Photo by Jim Grant)

In the late 1970s the Swiss Army was itching to replace its hard-hitting Stgw 57 Battle Rifle with something more NATO friendly (meaning in 5.56 NATO) and modular. They tested several models from a multitude of gun-makers and a carbine developed by SIG, the SG 541, was announced as the winner in 1983. The next year the Swiss Military predesignated the rifle, the SG 550 and developed a carbine version known as the SG 551.

Military fetishists the world round were drooling over the prospect of the new futuristic-looking assault rifle that seemed to do everything the M16 could not. The SG 551 has the light recoil of the 5.56 M16 with the incredible reliability of the AK platform. Strangely, the U.S. imported only a handful before legislation made doing so impossible due to its cosmetic features. The executives at SIG saw an opportunity and in 1985, established a German subsidiary of Swiss Arms AG under the name Sigarms to import and distribute SIG firearms in the United States.

Unfortunately, it wasn’t until 2006 that SIG began importing a modified version of the SG 550 to the States. Known as the SIG 556, the American-friendly version utilized the STANAG magazines (much like the M16 and AR15) and a proprietary collapsable stock. While this upset purists and collectors, the new rifle proved reliable and robust. Hoping to expand upon its new rifle line, SIG released a .22 variant known as the SIG 522.

Unlike its full-power military brothers, the SIG 522 is a simple blowback semi-automatic rifle. The internals are so different, it has no mechanical parts interchangeability with any other SIG rifle. It also weighs about half as much.

Despite being a mechanically simple rifle, the SIG 522 is astoundingly accurate and reliable. Many shooters looking to become more familiar with the controls of their 5.56mm SIG rifles practice with the SIG 522 to get substantially more trigger time for the money. The 522 uses the popular Black Dog type magazines commonly used in drop-in .22LR AR-15 conversions. These replicate the shape and size of AR15/M16 magazines and will fit in pouches designed for STANAG magazines, which makes reloading drills with one translatable to the other. 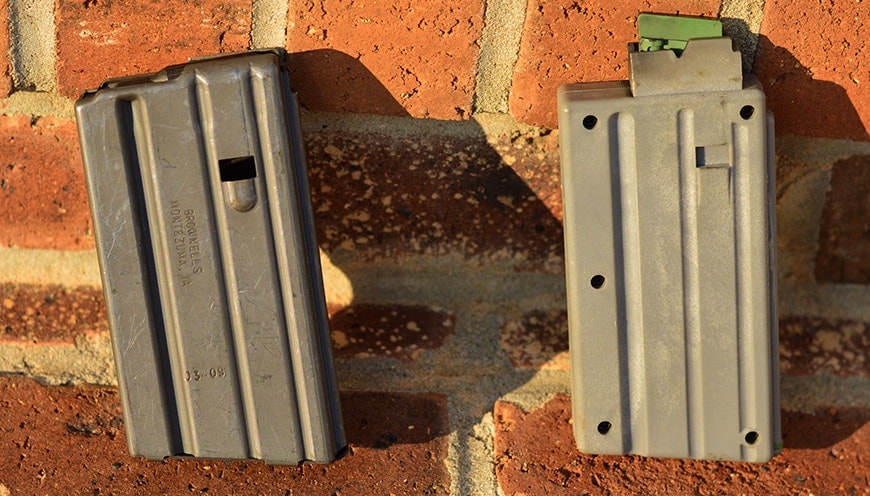 SIG magazines and AR15 mags are very similar in shape and size. (Photo by Jim Grant)

The SIG 522 is more than just a trainer rifle for the full-sized SIG 556. It’s a solid tactical plinker that is a great alternative to traditionally styled .22 LR rifles, if tactical is more your style. Although SIGs are never cheap, the 522 is surprisingly economical with an MSRP of $587 and street prices below $500. Originally, the 522 came with no iron-sights, optics or aiming device of any sort. However, after taking advice from its many customers, SIG now includes aperture ‘peep’ sights on all its .22 rifles, bringing the cost of ownership down even further.

Presumably, the reason SIG went with a peep sight instead of the more historically accurate diopter drum sight, is cost. The SIG drum sight for its 556 series of rifles runs upwards of $200, when they can be found.

At the range, the SIG 522 proved to be minute of squirrel accurate at 100 yards, grouping 3 1/2 inches with bulk Federal .22 LR ammo. Given that .22 LR losses most of its effectiveness past 100 yards, this accuracy is completely acceptable. 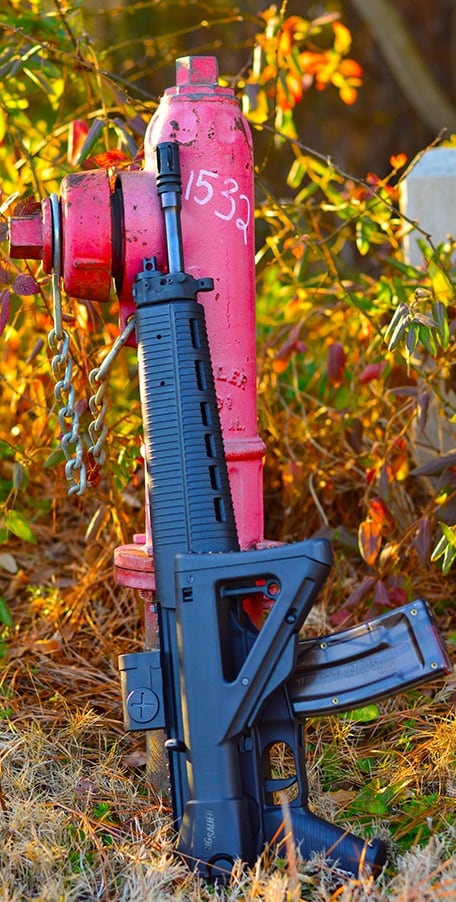 The stock folds for easy transport. (Photo by Jim Grant)

The ergonomics on the SIG 552 are outstanding with the bolt hold open lever and magazine release in locations similar to an AR15. The safety is a little awkward and requires longer fingers than this reviewer has to actuate while maintaining proper grip, but they are ambidextrous.

Reliability with the rifle was excellent, not just for a rimfire weapon, but for any rifle. During the course of my review I fired 500 rounds of CMP surplus ammo without cleaning and experienced no stoppages.

An unusual area where the SIG 522 shines is getting newer, younger shooters more enthusiastic about range trips. The fact that it looks more like something out of Call of Duty than traditionally styled plinkers, means younger generations will want more trigger time with the cool gun that looks like the SA-805 from Ghosts. Shooters looking for an excellent .22 plinker from a high-quality company that will run for years should look no further than the SIG 522.