If you like a 1911-style gun, and you want it small enough to fit in your pocket, and you’re a bit recoil sensitive, and you prefer a stylish pistol over a purely functional one, and you’re willing to pay about $600 for a gun that meets all these criteria, then the SIG P238 pistol is the gun for you.

I had a chance to try the SIG P238 as part of the BBTI tests of the .380 ACP cartridge. Nice gun, it functions great, and has SIG quality. Thanks, but no thanks.

The SIG P238 is a nice gun—a very nice gun. The little pocket pistol was introduced back in 2009 and has since remained one of SIGs biggest sellers. And rightly so. 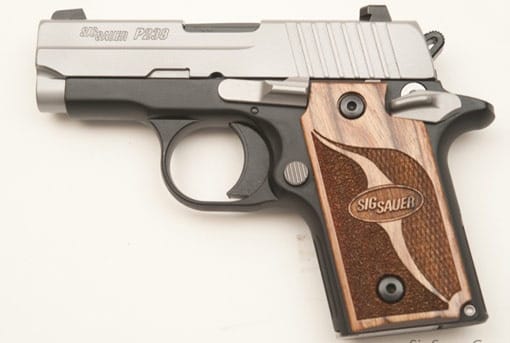 The gun has a top-notch fit and finish—quality that you would expect from a manufacturer with a reputation as good as SIGs. And there are a buttload of different sub-models available, so you can get a P238 in pretty much any flavor you want: black, stainless steel, tan, two-tone, and even rainbow (rainbow?). Not to mention the different grip styles.

And that tells you something about the nature of this gun. It is meant to appeal to those who want a 1911-style gun, one that looks great and has a lot of the high-end/custom 1911 features.

The ergonomics are very much like a 1911 (though much smaller) and the operating controls—safety, magazine release, slide stop—are also like a 1911. And it has a single-action only trigger.

An argument against pocket 1911s

The P238 comes at a price and I’m not just talking about money. The only way to carry it ready-to-use is with a round in the chamber, the hammer cocked and the safety applied—just like a typical 1911. However, you wouldn’t normally carry a “cocked and locked” 1911 inside of your pocket and there are two main reasons for this.

First, having the hammer locked back is an invitation to get lint or crude between it and the firing pin. Second, if you bump the safety and it disengages, you’re risking having the gun discharge.

SIG realized this latter point and took a reasonable step in increasing the trigger pull considerably. A fairly heavy and long trigger pull on a double-action only gun is understandable and is a common way to make a gun safe for pocket carry without actually adding a manual safety. But an eight-pound trigger pull on a SAO 1911-style gun that also has a manual safety just feels wrong to me. Counter-intuitive.

I think that is my biggest complaint about the gun: the design doesn’t really make any sense to me, for its intended use. Personally, were someone to just give me one of these guns, I think I would designate it for holster carry only, and get the trigger pull lightened considerably. But if the heavy trigger doesn’t bother you, and you’re comfortable with carrying a “cocked and locked” gun in your pocket, then disregard my complaint. 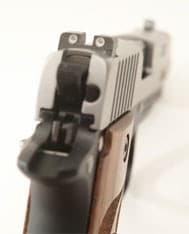 Besides my discrepancy, it really is a nice gun. It has an alloy frame and steel slide, so the overall weight is less than a pound. However, it is still twice as heavy as the P3AT or LCP, but that makes a huge difference in terms of felt recoil.

The .380 ACP cartridge isn’t very powerful, but out of a really small, lightweight gun, it can still be very uncomfortable to shoot. You won’t have that problem with the P238—at least, I didn’t. The fact that I like the ergonomics of the 1911 style also helped make this gun feel comfortable in my hands.

And that helped with accuracy. Such a small pistol isn’t really intended to be accurate at more than seven to 10 yards, but the P238 is quite adequate for hitting a small target (say, four-inch groups) at this range. Part of the reason is that the sights are actually much better than you’ll find on many pocket pistols.

The sights are three-dot style, with optional tritium inserts (which aid greatly for low-light situations). Again, the very heavy trigger pull was a problem here, in that in my opinion it tended to compromise my accuracy with the gun.

The P238 is a well made gun, no doubt about it. I’m just not sure that it is a well-designed one. But to each his own.