If guns were cars, SIG Sauer would be the Land Rover of the firearms world. Yes, there are higher-end options available for special applications and sportier choices are out there for more money.

However, SIG, much like Land Rover, can do 99 percent of what most shooters will ever ask of it, even in hellish environments. Wishing to offer ammo that performs as well as their firearms, SIG announced its new Elite Pro ammunition in .380 ACP, 9mm, .40 S&W and .45 ACP.

I don’t blame SIG for getting into the ammo game, even if some critics believe it’s a poor decision to start with only defensive ammo. I wholeheartedly disagree. SIG pistols aren’t cheap and neither is defensive ammo. Imagine if you were buying your first CCW pistol and were strapped for cash. Assuming you saved enough money to buy a nice SIG, the sound advice of running a couple hundreds rounds of your chosen defensive ammunition before carrying the gun could be financially crippling.

What if SIG already made a round specifically designed to run in their pistols? Hypothetically, a shooter could run plinking ammo through the gun to check for function, and buy two boxes of the expensive stuff. Dedicating one to getting a feel for recoil and the other to load up a magazine for carry or home defense. 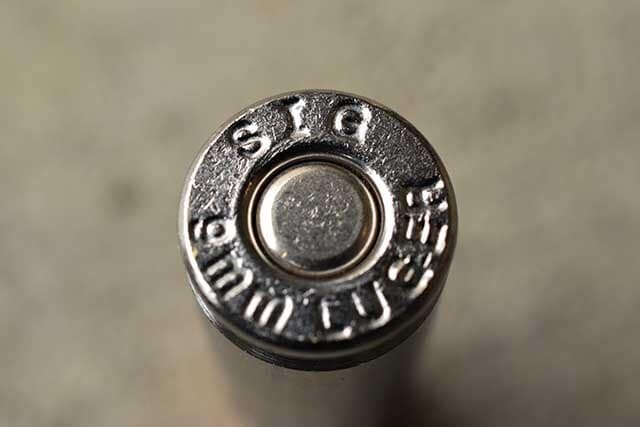 If nothing else, how cool is it to have shell casings head-stamped, SIG? (Photo: Jim Grant)

In theory this would be a great solution, but what about in practice? To find out, I shot 150 rounds of SIG’s 9mm ammo through four different firearms and 100 rounds of .45ACP through three to check reliability.

To test SIG’s .45 ACP, I ran it through a Colt Series 70 1911, a Beretta PX4 Storm SD Type F and a Colt New Agent sub compact 1911. In all three weapons the ammunition ran flawless, though did have noticeably more recoil than standard 230gr ball.

Accuracy of the ammunition was great, and on par or better than the Federal American Eagle line of ammunition. In terms of terminal performance, ballistic gelatin wasn’t available for the review and farmers in my area had already bought up the rotten fruit for their livestocks, so I tested the ammo against one of my greatest foes: bowling pins. 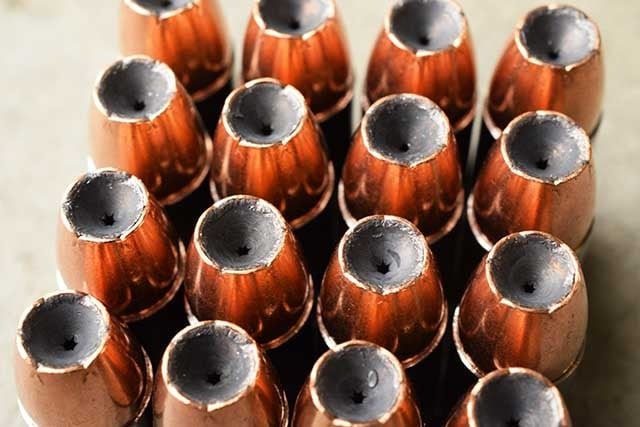 The new SIG rounds are as mean as they are beautiful (Photo: Jim Grant)

If you’ve never shot a bowling pin match before, these little guys are evil incarnate. Initially, they’re fairly easy to knock down with bullets of basically any caliber.

However, once they’ve seen a few too many rounds they develop cavities, soft spots and lead deposits that make knocking them off a table a nightmare. I’ve had six rounds of 62 grain .223 ammo sail through one without budging it before a seventh round threw it 15 feet off the rack.

What does this matter? If a round doesn’t expand properly, the bowling pin will either wobble off the table or simply fall over. A quality hollow-point round will dump all of its energy into the pin, and launch it backwards. Far from scientific, but it will give you a good idea of a round’s performance.

I recorded myself shooting these wooden bastards and while reviewing the footage I noticed something I had not in person. Behind the pins there is obviously a great deal of foliage, the range is located in the woods. Some of said greenery moves violently a single frame after hitting the bowling pin when I was shooting with American Eagle 9mm FMJ.

The other ammunition seemed to stop in the pin, even the jacketed .45 ACP, though this could simply mean that the impact was hidden behind the pin itself. Either way, some interesting food for thought. 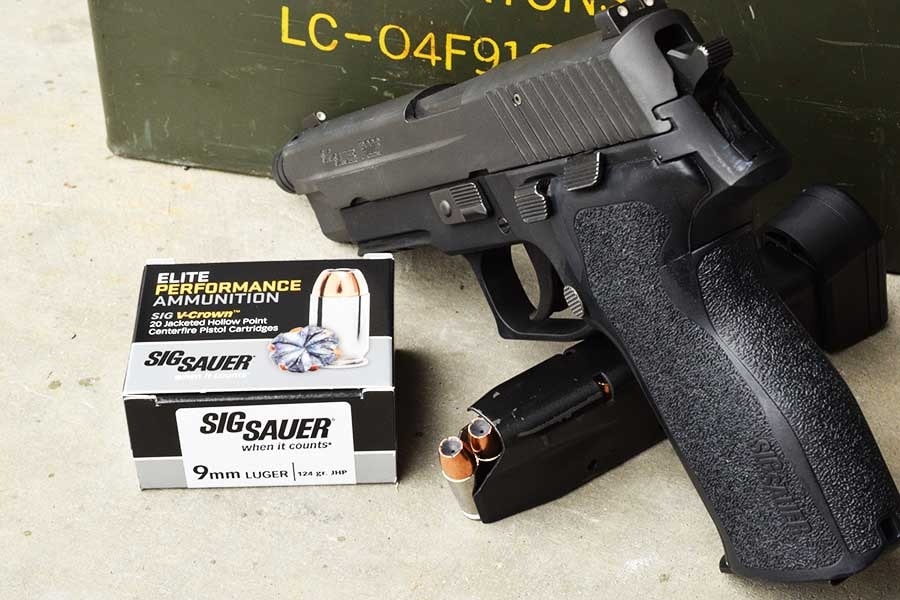 My SIG P226 gobbled down every round of the new SIG ammo I fed it. (Photo: Jim Grant)

Final verdict on the SIG ammo, from my unscientific testing, is great. I feel it would be an excellent defensive ammunition choice given that in my limited testing it runs flawlessly and expands in soft targets. These are the two most crucial aspects of defensive ammunition, and any ammo that meets these criteria will do its part, if you will.