Bargain Hunting: The SKB Model 1300 shotgun has everything you want for half the price (VIDEO)

SKB has been quietly cruising under the wing and clay shooter’s radar for decades, and they seem quite content.  The SKB marketing slogan is “the affordable choice of quality.”  They do indeed make quality guns at an affordable price point, and for the most part, these shotguns shoot and last like guns of twice the dollar.  SKB only makes shotguns, and they do it well.

SKB shotguns have been sold in the United States since 1968.  Between 1968 to 1978, they were imported through the Ithaca Gun Company, and then by the Chicago-based Mitsui with manufacture dates 1981 to 1984. Everything from then on has been handled by SKB Shotguns USA. 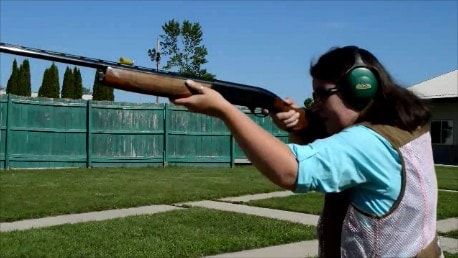 The author blasting clays with the SKB Model 1300.

What exactly are the letters SKB? The company name was derived from the Samurai family name SAKABA.  The vowels were dropped out of the name to form SKB.  The company was formed in the Ibaraki province of Japan in 1855.  SKB Shotguns USA is located in Omaha, Nebraska, and SKB USA carries replacement parts for the majority of older SKB shotguns with the exception of older recoil-driven scatter guns.

The review gun is a Model 1300 gas-operated 20 gauge with a 3-inch chamber and 28-inch barrel.  The furniture is fine, high gloss walnut.  It has a ventilated rib, and as is common, the safety sits at the rear of the trigger.  It carries flush, interchangeable SKB Inter Chokes, which are sold through the SKB website.

Many aftermarket options are available, including some nice extended chokes from Briley, which I prefer for both ease of identification and changing without a wrench.  Many of the SKB chokes are interchangeable with those of Weatherby.

New SKB’s carry a one-year factory warranty.  Though my copy is a relatively plain version with straight blued receiver, many other SKB models have fine engraving of hunting scenes or scrollwork.

SKB’s universal automatic gas system allows shooters to quickly switch between light 2 3/4 inch loads and heavier 3-inch magnum hunting rounds by simply adjusting the outer screw located at the front of the forearm.  There is no need to change barrels, move o-rings, or disassemble the firearm to make adjustments.  A quarter turn switches it between the clearly marked high and low position. 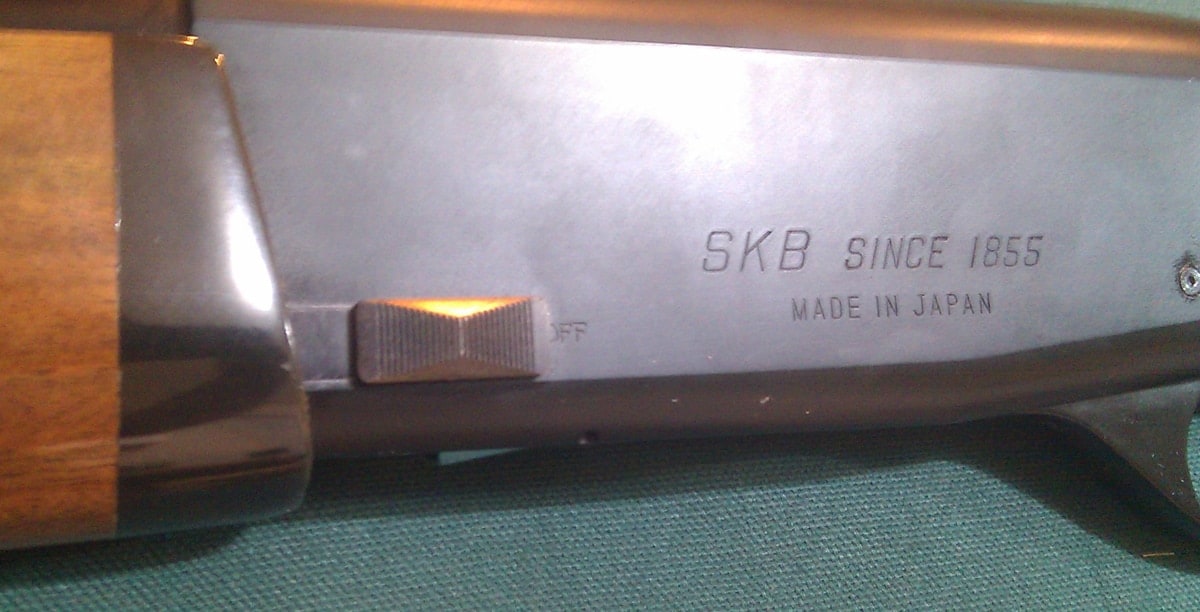 The button on the left is the magazine cut off.

The gun tested fed everything from the lightest target handloads to high brass magnums.  Though the adjustment cannot be made with, say, the base of a brass shell, a simple quarter turn with a screwdriver is all that’s needed.  Besides, it’s best to use caution in making the turn so as not to damage the wood of the stock surrounding the screw.

This scattergun also has the nice feature of the magazine cut-off system.  By manipulating a slide along the receiver, it is simple to separate the action from the magazine, making it possible to empty the chamber without emptying the magazine.  This is a convenient and safe feature in the field, for the hunter who wishes to clear the action, but not have to unload and reload the tube each time.

As with most SKB shotguns, this 20 gauge Model 1300 has a lengthened forcing cone, which provides a gentler transition along the shot column.  Lengthened forcing cones generally offer improved downrange performance by diminishing shot deformation, wild fliers and ultimately, perhaps even a slight reduction in felt recoil.  By the end of several days of shooting and putting the gun through its paces, we were all impressed with its performance.

Our test gun ran through several hundred rounds with neither an issue nor a cleaning.  It patterned nicely at the board with the flush mount modified choke, which also smashed clays on the trap field from the 18-yard line.  The full choke turned the 20 gauge into a sweet winghunting gun.  No matter if starting with the gun on the shoulder, or quickly mounting it in the field, the Model 1300 comes up nicely and the single front brass bead lines up right on target. 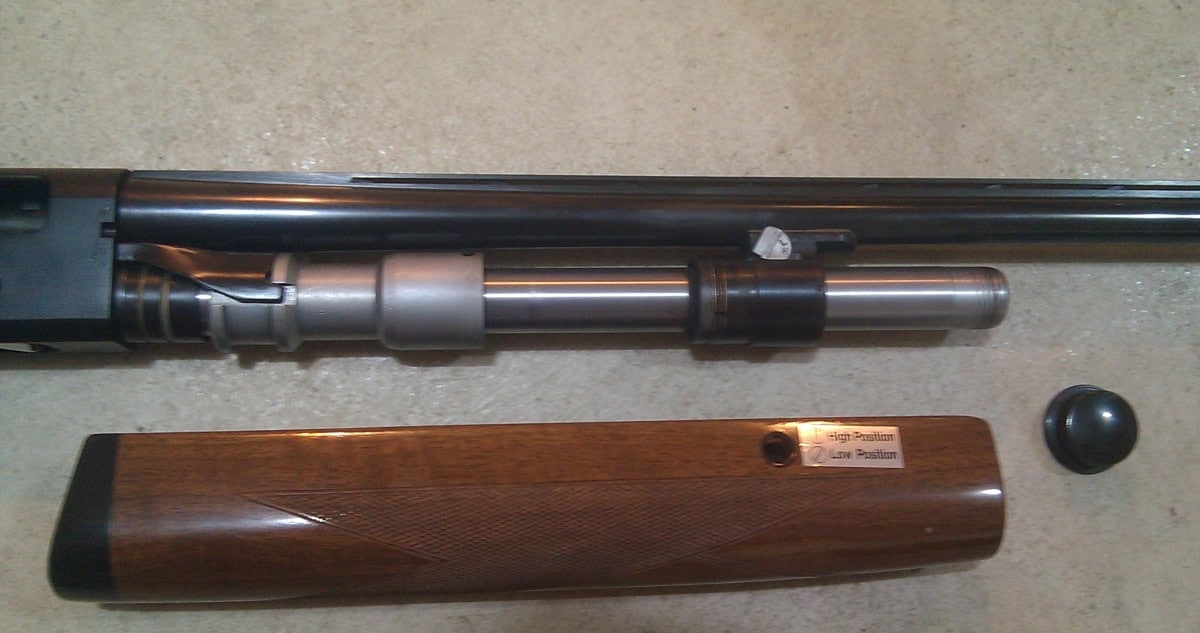 The SKB Model 1300 field stripped for your viewing pleasure.

The disassembly, cleaning and re-assembly processes are no more difficult or easy than any comparable semi-autos, and the gun showed no signs of undue wear.

A big plus for the brand is the availability of customer service at SKB USA.  They are easy to deal with and quite involved with their shooters, including a presence at the Grand American Trap shoot each year.  Competition shooters are welcomed to join their Circle of Champions, and they gladly provide patches for quality shooting, from 25 to 200 straight.  All the shooter must do is send a copy of their scorecard. 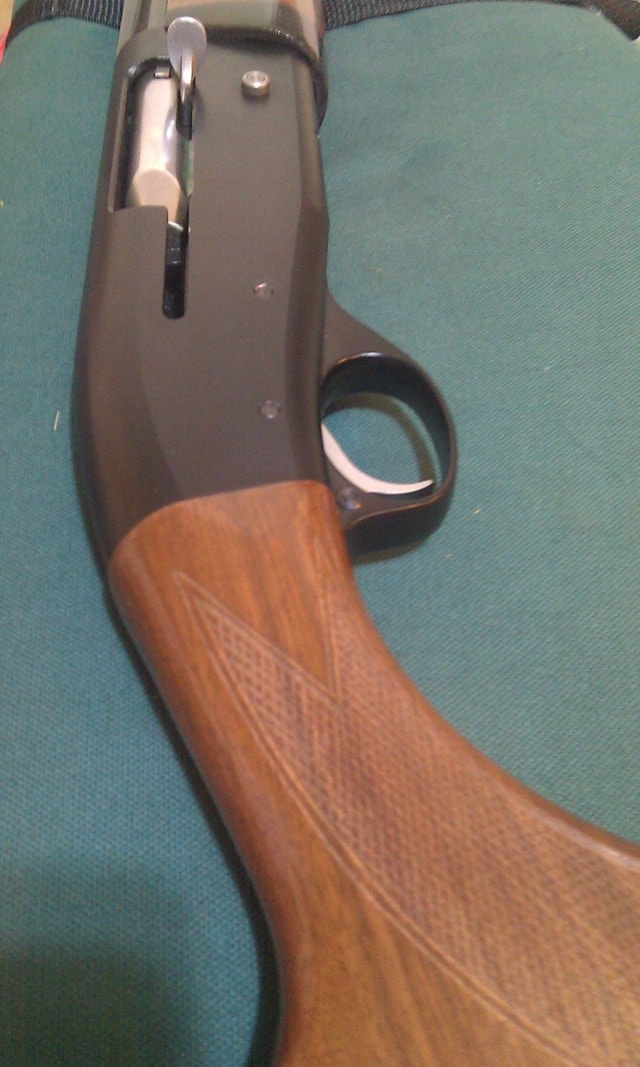 The meat and potatoes of the review is pretty simple.  This SKB 20 gauge is equally at home on any clays course as it is in the pheasant fields, which is exactly the dual-demands I generally place on my sub-gauge shotguns.

If I’m grabbing a semi-auto 20, my hand falls to the SKB for two reasons: first, it’s a reliable, solid shooter; and secondly, it is a classy looking gun, yet not so pricey that my heart breaks if it gets a couple handling marks.  In fact, most used semi-auto versions can be found around the $300 to $350 mark, with new around double that price, if they can be found.

I look forward to finding out more about the line of O/U and SxS shotguns, which is where SKB is pouring most of their current resources.  So, if you’re in the market for an all around solid shotgun with features often found only on higher dollar guns, SKB is definitely a name to explore.