Gun Review: Playing the odds with the Smith & Wesson 2206

For a couple of years in the mid-90s, Smith & Wesson produced a nice, solid, stainless steel target .22 called the 2206. You can still find it for sale online and in local shops without much effort. And since you’re reading this you’re probably wondering, “Should I get it?”

To answer that I’m going to borrow a line synonymous with another S&W gun, “Do you feel lucky, punk?”

The S&W 2206 was a mid-range .22 target gun and it sounds nice enough. It was available with either a 4.5-inch or 6-inch barrel, decent sights and was designed so that the barrel sat low under the slide so a suppressor could be attached without messing up the sight picture. 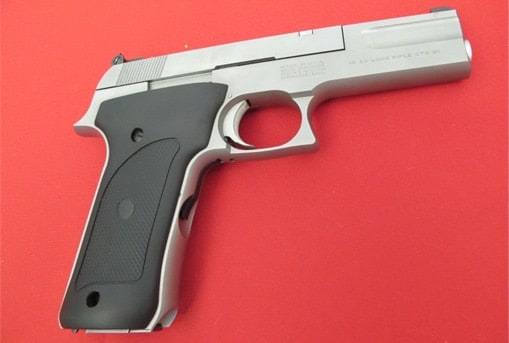 However, when it was introduced in 1990 it quickly earned a reputation for being problematic – particularly with some brands of ammunition. The extractor wasn’t very strong and failures-to-eject were common. Sometimes cases would split and get stuck in the chamber, requiring the application of a rod from the muzzle to dislodge them.

Well, when I say these problems were “common”, I mean relatively speaking. Supposedly, S&W’s test data showed an overall problem rate of about 4 percent. That was a high enough rate to eat into the profit margin for the gun. At least, given that the gun wasn’t really a popular seller to start with.

Why wasn’t it popular? I had a chance to find out for myself recently when a friend took his 2206 out of the safe for me to try.

First thing, it’s not a bad looking gun. Black rubber grips, brushed stainless steel. Sorta classic. The overall lines of the 4.5-inch barrel version (the one I tried) look something like a 1911.

But it has some real quirks to it. Like the magazine release, which is in an indent in the middle of the front strap of the grip. I think the idea was that this would make it effectively ambidextrous, but what it did was effectively make it so you had to use both hands to hold the gun and release the magazine. Awkward.

And then there’s the safety, which is only on the left side, high up and behind the grip. And even on the older gun we were shooting, it was stiff. Meaning that once again, it was awkward to use, and effectively took two hands to operate.

Otherwise, it was a fine little gun. Trigger was good – smooth – and broke pretty clean. Accuracy was fine – even just casually shooting it, I was able to do 3-inch groups at 25 yards without a problem. We didn’t have any problems with the gun jamming or failing to eject or failing to fire.

But like I said, there were those quirks. Not ideal. The price was relatively high for a fairly basic target .22 – about $600 new. Add in a reputation for having problems with some ammo and it isn’t too surprising that S&W didn’t sell a lot of the guns. Likewise, it wasn’t surprising that S&W decided to discontinue the line only after seven years.

What was that question again?

If you come across one, should you get it?

Used, I’ve found them listed in the $300 to $350 range, which isn’t bad for a nice little target pistol that works.

But there’s the rub: will it work? Or will it be one of the 4 percent? But 4 percent isn’t too bad a number, right? When you’re just playing the odds?

Some people really love these guns and have never had a problem with them. My guess would be that they’re not likely to sell their guns, under most conditions. Sales would likely only happen because someone died, or was in financial straits and needed some cash.

But if a gun was one of the problem ones, who would want to keep it?

Combine these two factors and I’d bet that of the 2206s you’d find for sale, the problem ones make up a much larger percentage than just 4 percent. How much larger? Who knows. Could be just 10 percent. Could be 50 percent. There’s no way to tell.

So, do you feel lucky?