Need a revolver? Look no further than the Smith & Wesson 686

The revolver is a historic design, segmented across history by percussion cap, single- and double-action designs all the way to Mateba’s futuristic leap into the autoloading world.

We have a cross-section of sweet guns from each period of history with a unique function and aesthetic. So when futuristic versions of scrub gun writers like me look back from their hovercouches at the 1990s and early 2000s, what will be the era-defining wheelguns? Which models will be fondly viewed as examples of an era’s best designs in durability, looks and function?

I don’t have time travel powers (or a hovercouch), but I’d bet the Smith & Wesson 686 will stand out as the ‘modern classic’. 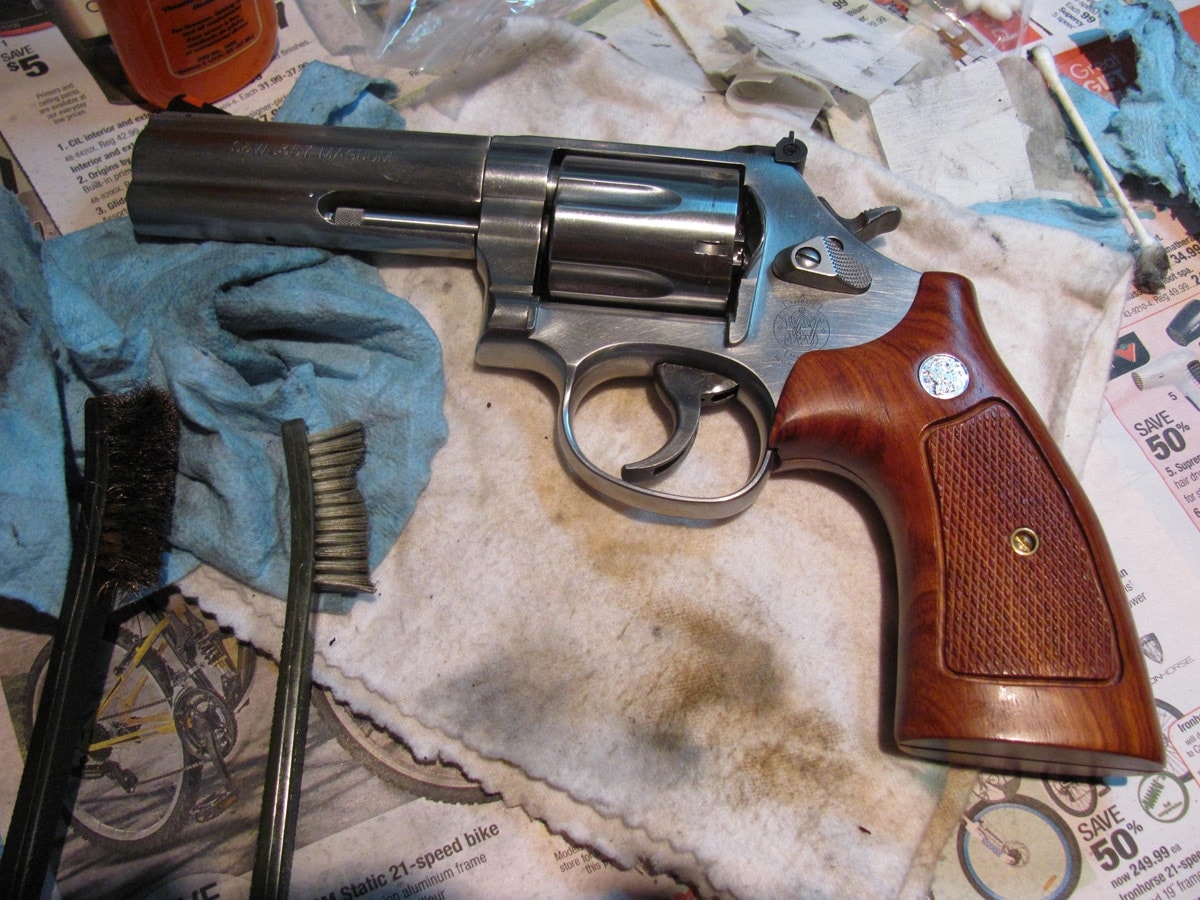 The Smith & Wesson 686 all cleaned up and nowhere to go (except to the range). (Photo credit: Andy C)

A little bit of history

The Smith & Wesson 686 is an L-frame handgun, a stainless version of the 586 and 581. After the powerhouse .357 Magnum was widely adopted in the in the 1960s for law enforcement and personal protection, the K-frame Smith & Wessons proved to be adequate, but not ideal guns for handling magnum loads. The 1970s saw the more robust N-frame introduced by the Model 27 and 28, beefed-up designs capable of blasting .357 all day without a hiccup. Then, in 1980, the L-frame was introduced as a slightly slimmer but still robust alternative to the N-frame.

Today the 686 is one of Smith & Wesson’s most prolific revolvers, with the basic models widely available (where they can be found) and also many variants in production. They run between $830 and $900 for the more basic models, and hyper-tuned competition models from the Performance Center cost substantially more. For my review, we’ll be checking out the 4.25-inch barrel (the Canadian special version!) edition of the 686-6.

A look over the 686 shows it’s a thoroughly modern spin on the classic double-action revolver. The design also reflects the expectations and demands of modern shooters. The gun is meaty, tipping the scales at 42 ounces unloaded. I would call the look ‘muscular’ instead of ‘chunky’ because it doesn’t carry unnecessary weight. It looks designed for serious use. 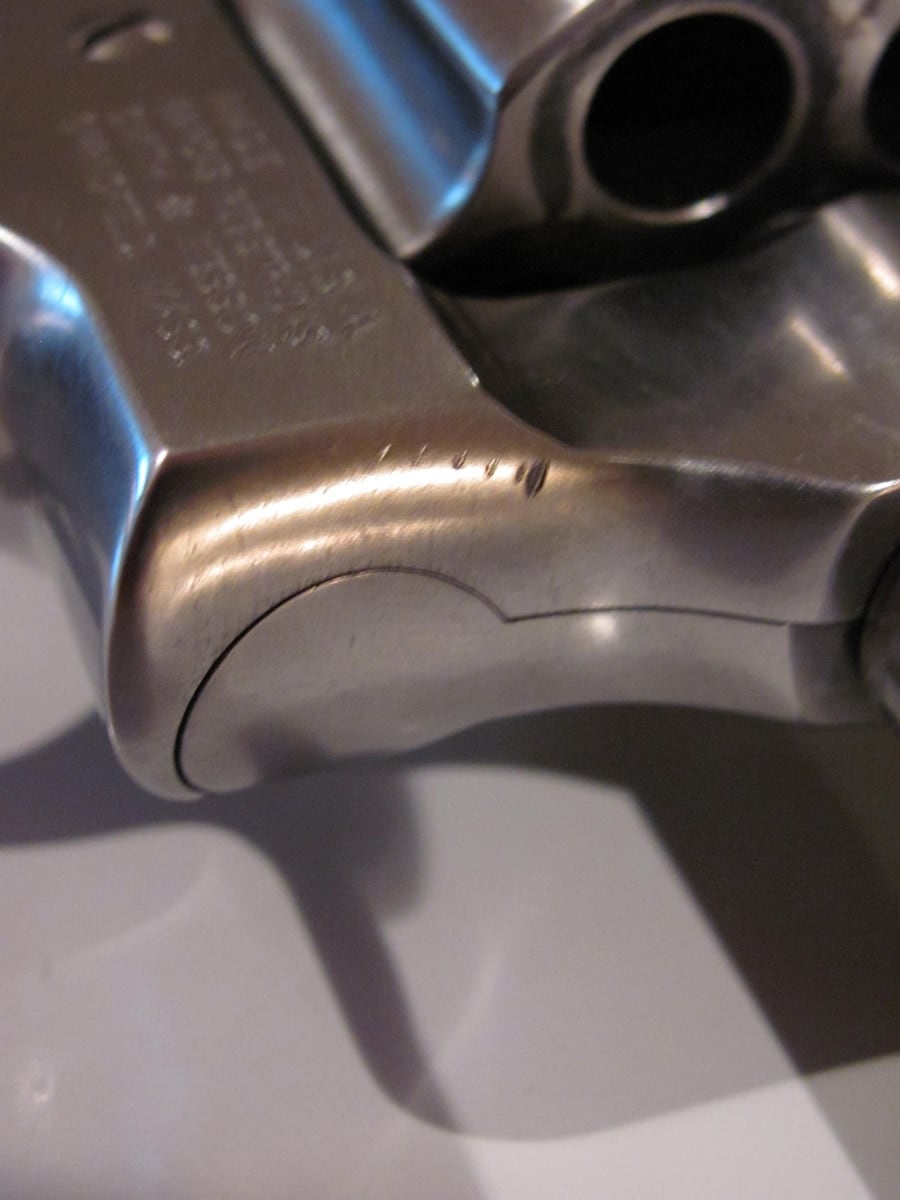 My gun had a superb finish from the factory. The stainless steel is shiny, but not to the point of obnoxiousness I find nickel-plated guns sometimes reach. Engraving is minimal and tasteful, with a caliber marking on the barrel and classy Smith & Wesson logo on the left side of the frame. The trigger and hammer are both case-hardened steel, a darker and subdued contrast to the stainless steel. Unfortunately, my gun also came with some tooling imperfections on the front of the frame and near the forcing cone. It’s a minor issue that didn’t bother me since this would be a hard-use handgun, but I wouldn’t blame somebody for asking for another model. Just be sure to check yours over carefully before you buy if you can. The gun’s insides were well polished with no evidence of sloppy machining.

The thick barrel sports a full underlug that adds weight to the front of the gun, balancing it nicely and helping absorb recoil. The six-round cylinder is fluted in the standard model, but if you want a sleeker look, unfluted cylinders are available as a bit of bling. There’s also a 686+ model featuring a seven-shot cylinder, if you think one more round would help. Personally, I went for the standard model because the rules for most handgun games make a revolver with more than six rounds a liability.

Sights are traditional, with rear notch with a white outline and the front is a black plastic ramp with a red insert. The rear sight is adjustable for windage and elevation with a small flathead screwdriver. I can testify these are pretty tough sights as my gun’s had the misfortune of being dropped (or being held while I fell) a few times. The apparently indestructible Smith & Wesson-brand plastic has survived unscathed.

Rounding out the package are rubber grips. Two pieces of molded plastic are joined by a single 7/64-inch hex screw (a nitpick here: why not use a flathead screw like most other grips, which would also work with the sights?) through the frame. They have rounded, subtle finger grooves that don’t obnoxiously make fingers conform to their shape. Most people I take shooting, all of which have varying hand sizes, find them comfy. 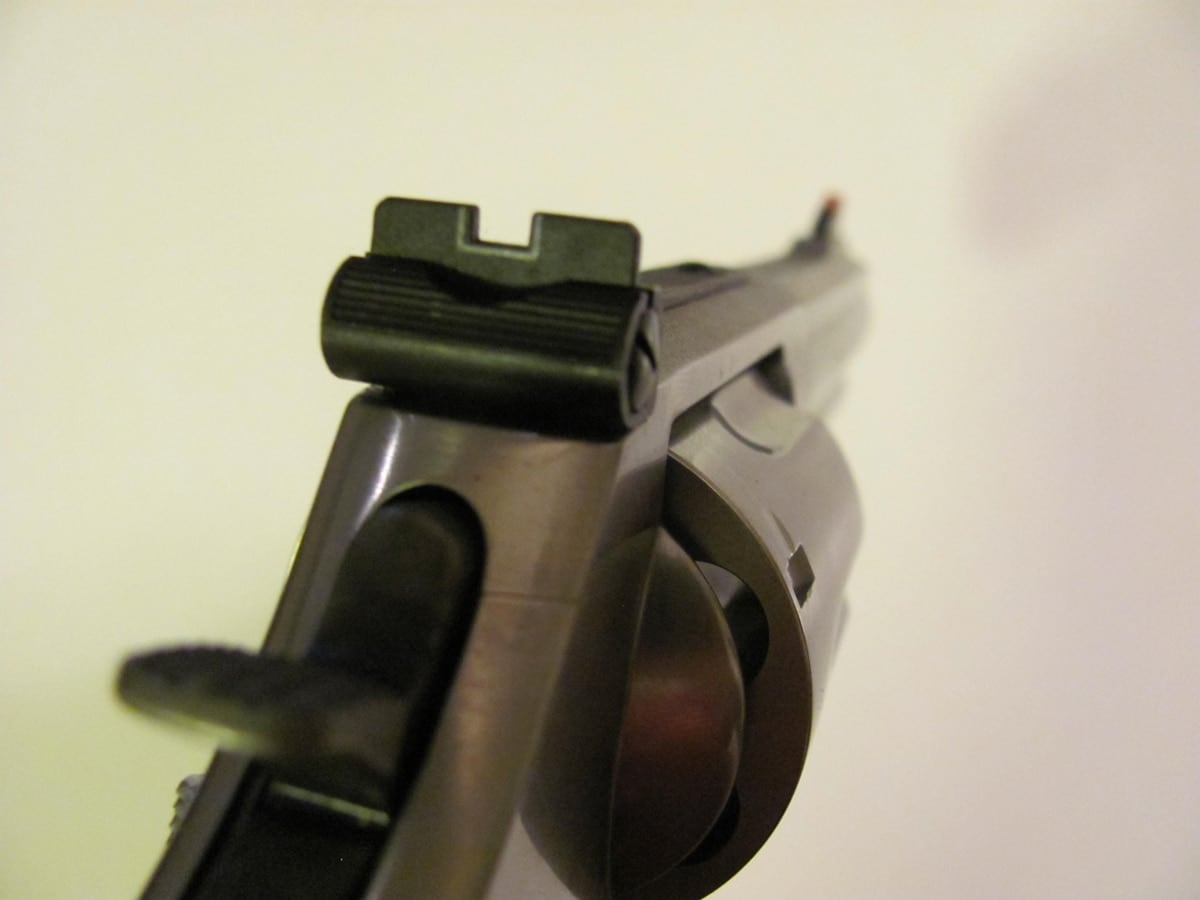 The plastic rear sight is durable, and lines up damn near perfectly with the front sight. (Photo credit: Andy C)

I’m picky about revolver grips and I have to say these were pretty good. I say “were” because after about 2,000 rounds, the rubber had become permanently deformed. This left them with a very minor amount of back-and-fourth play, measured at 0.06 inches. This sounds like a ridiculous criticism until you squeeze the trigger and the entire gun shifts in your hand, raising the front sights and ruining your precise shot.

On the plus side, it gave me an excuse to get some sweet aftermarket wooden grips that are a bit bigger and add a touch of old-school class to the gun.

All in, the features of the 686 are a reflection of the traditional revolver design being brought into the modern era. The revolver’s timeless reliability and functionality is married with today’s metallurgy and robust engineering with great results.

My 686 has had slightly more than 7,000 rounds down the pipe with varied factory and handloaded ammo. Most of those were my favorite .38 Special handload. About 2,500 of the rounds fired have been .357 Magnums. It’s been a mixed diet of factory loads, experimental and tried-and-true handloads and my favorite flamethrower .357 Magnum recipe. With all rounds, the gun has performed beautifully. And these haven’t been in dainty 25-round slow-fire sessions. Some range days have seen my 686 spit upwards of 500 rounds. This is my action-shooting handgun for IDPA competition. 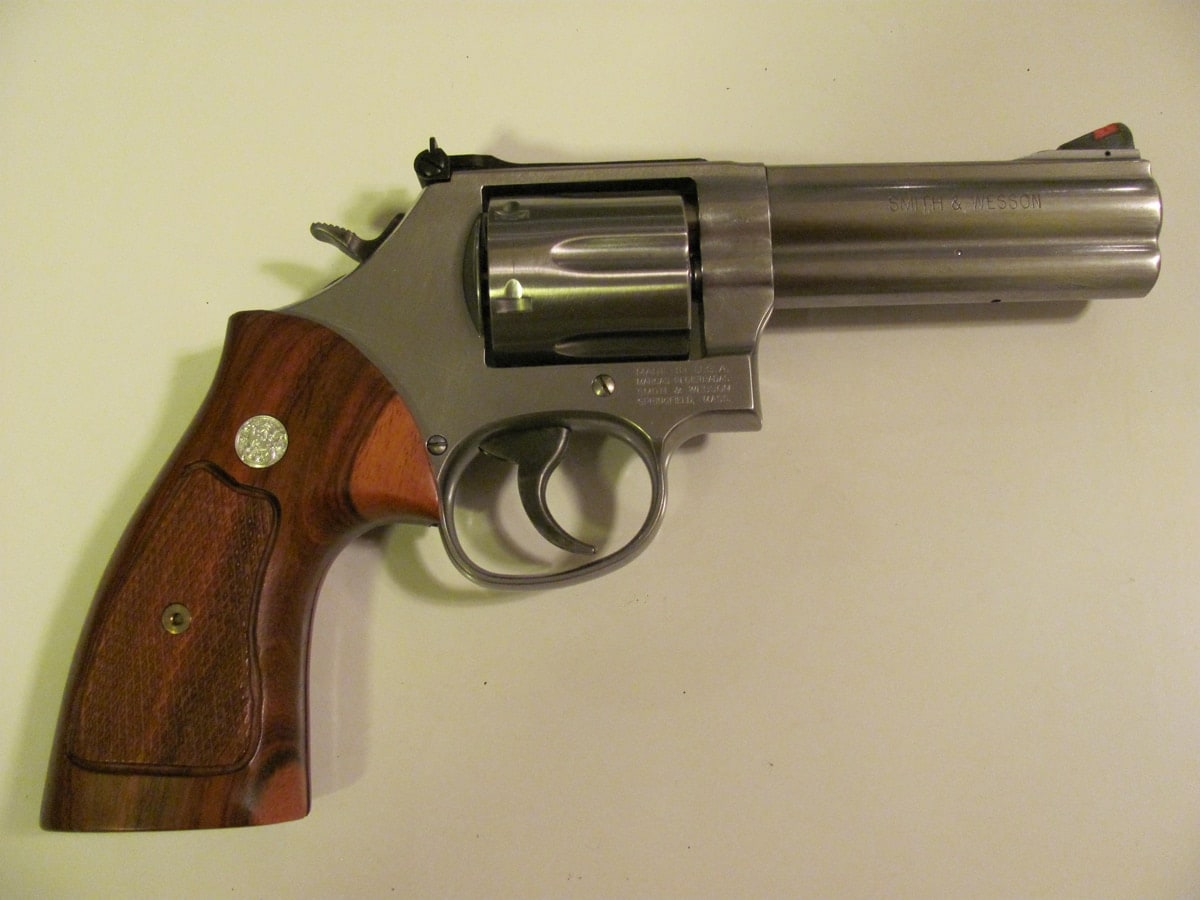 Interested in putting the gun’s ruggedness to the test, I blasted just over 1,100 rounds without cleaning it over two months before I finally had a failure of some kind where the cylinder wouldn’t close because of powder buildup under the ejector star. Even counting this as a failure is a stretch, since I was experimenting with new magnum handloads that were leaving behind unburned powder. Make your own decision on whether that’s a legitimate mechanical issue, but it’s the closest thing to a failure I can report with the 686 in all my trigger time.

The closest thing to a mechanical issue my gun has is cylinder peening. This is a product of fast double-action shooting. I don’t think anybody planning to use the 686 heavily should worry about this, but it’s still worth noting for those who like to keep their wheelguns pristine. A Ruger Security Six I’ve used a comparable amount does not have these markings and I’m not the only one to notice this. 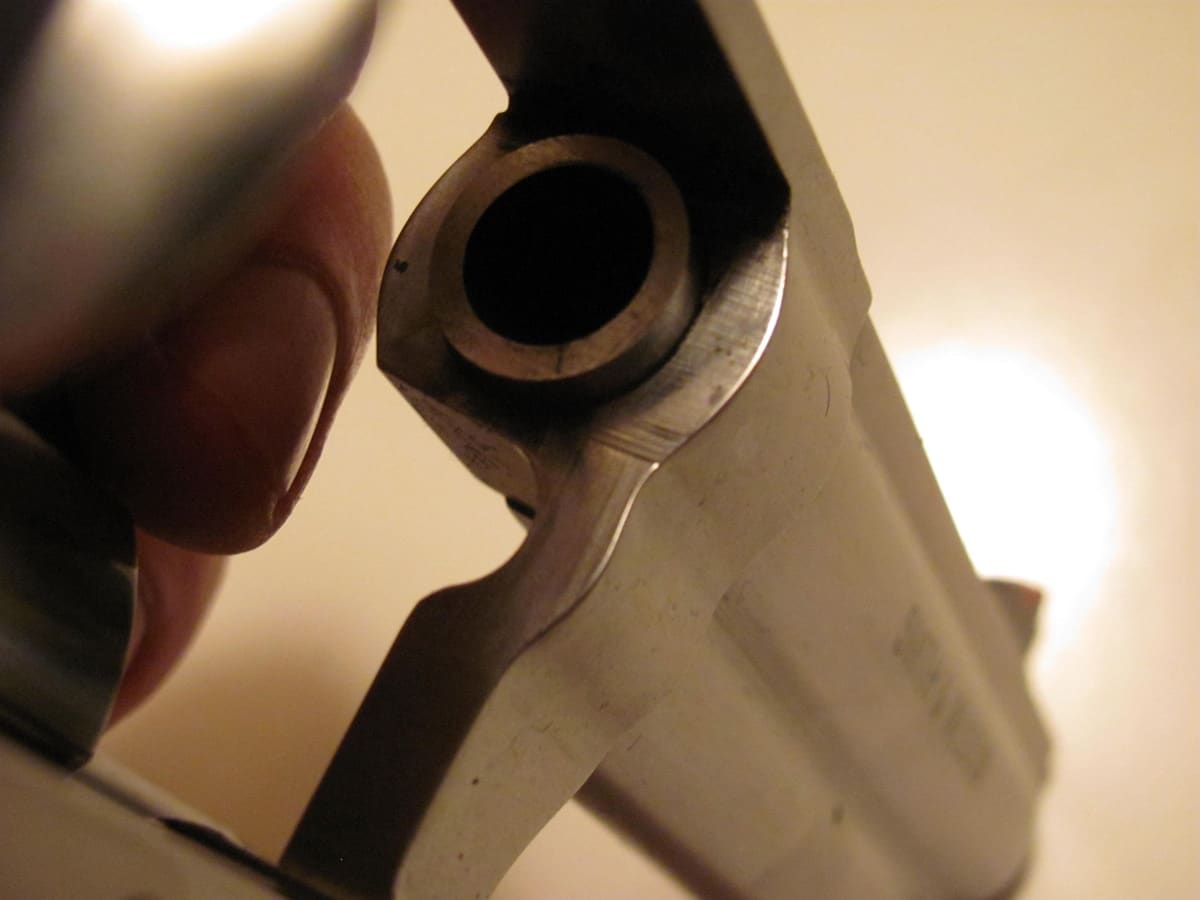 Smith & Wesson wheelguns are reputed for nice factory triggers. My 686 started out pretty good and has improved with time. Though I initially had a bit of stacking just after the middle of the double-action pull, this has smoothed out with use. I haven’t done any gunsmithing on this firearm and don’t think I’ll need to, as it’s my most-used handgun and I’m very comfortable with the very even 10-pound trigger pull now. The single-action trigger has always been superb, with a completely travel-free 3 1/2-pound break.

I’m fussy about sights, but the 686’s don’t warrant nitpicks. The red insert on the front sight helps it stand out when you’re searching for it after a transition, and also helps against darker backgrounds where a plain black front sight can vanish against your target. I’ve found the factory sights adequate for all types of shooting: single-action bullseye-style shooting out to 50 yards, close-range steel challenge plate work, and good ol’ paper punching.

Speaking of varied disciplines and styles of shooting, that’s another great thing about the 686: it’s good for just about anything you can reasonably expect a full-sized revolver to do. Bullseye, home defense, impressing your friends with big fireballs, competition — if you need a do-it-all revolver (that you don’t plan to carry concealed), look no further. 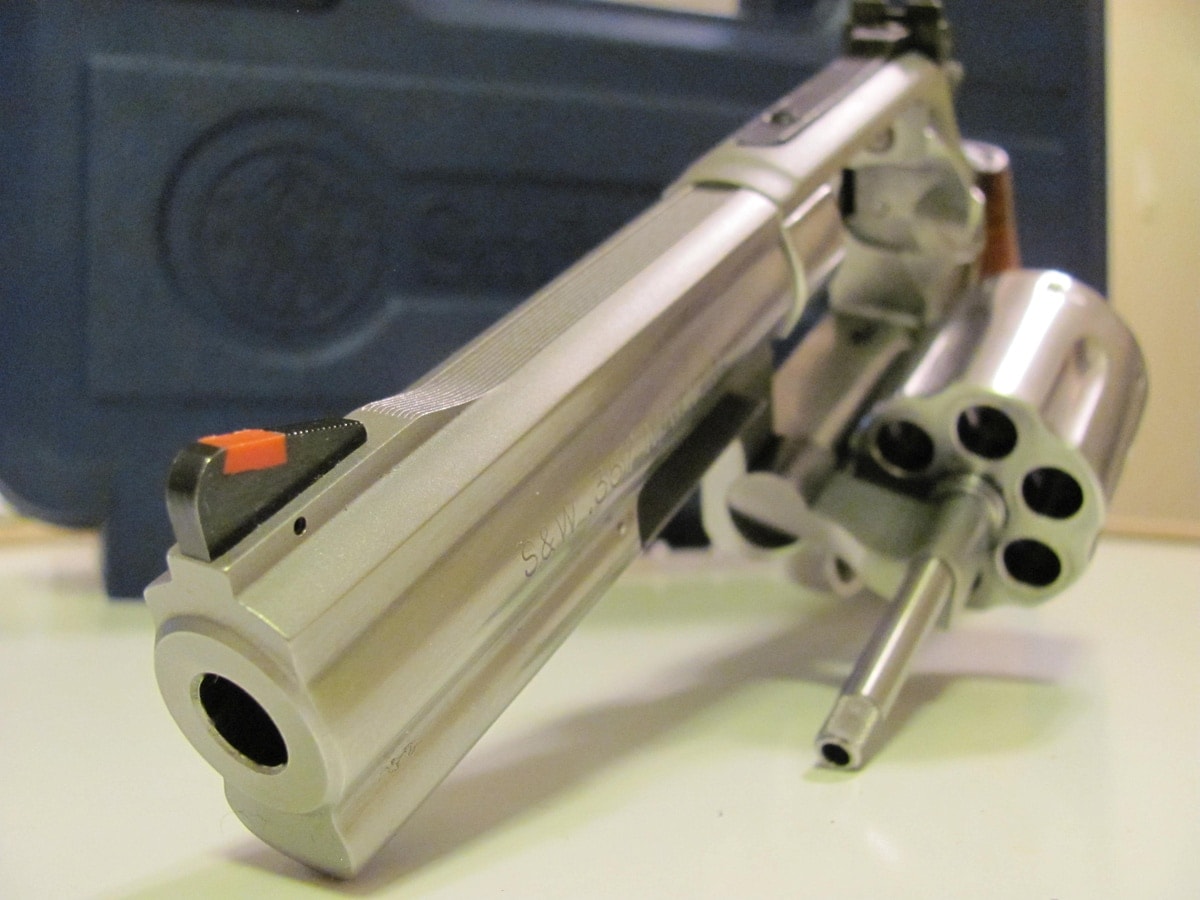 Whether you’re a revolver enthusiast, all-around shooter looking for a wheelgun to add to the stable, or just searching for a first handgun, you can’t go wrong with a 686. Like most Smiths, it’s a bit pricy and it isn’t perfect, but you’re definitely getting every penny’s worth. This is a gun you’d be proud to hand down to your children, much like your own parent may have handed you a Model 19 or Webley. It’s got the essential revolver appeal with all the perks that come with being made in the modern day, building on the legacy of the greats that came before it. If you want a serious wheelgun built for today’s shooters, look no further. The Smith & Wesson 686 is a true modern classic.