When you think ‘revolver’, what pops into your head? Most of these thoughts are nicely summarized by the term “hand cannon.” Major muzzle flash, .500 S&Ws slapping users in the face, eardrum-busting reports, and the word “Magnum” are just part of the revolver mythology.

But beyond the blinding muzzle flash and crippling recoil there’s also the subdued, practical and fun world of rimfire revolvers. It might be a thrill to send a .500 S&W Magnum downrange, but finding and paying for the ammo is a real killjoy. Add in sore palms and the big boy revolvers start looking less ideal as long-term shooting companions.

If you want something less flashy but reliable and fun without breaking the bank or your wrists, then turn to the realm of the rimfire revolver. And the Smith & Wesson Model 17 is as fine an example of the category as any.

The gun has gone by many names: the Outdoorsman, K-22, Masterpiece (with Target, Combat and other variations), and combinations of these. Introduced as the K-22 Outdoorsman in 1931 as a top-end rimfire handgun, the gun was quickly recognized as a superb specimen of its type. The gun saw the common changes in most Smith & Wesson revolver designs over the years, like a transition from five to three sideplate screws, addition of a transfer bar, and the infernal internal safety lock. As it changed with the times, so did the gun’s title. The Model 17 is just the latest incarnation of this fine handgun. 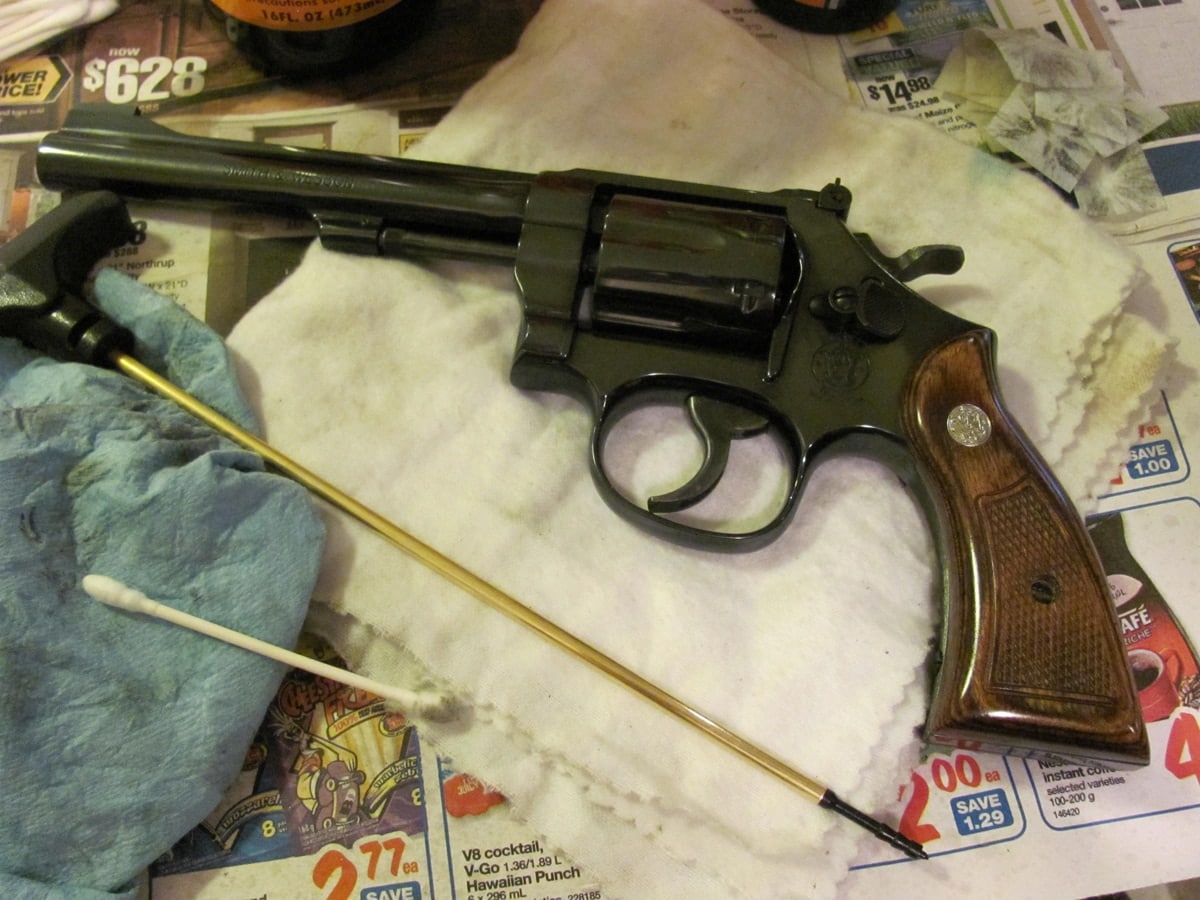 The Model 17 is based on Smith & Wesson’s venerable K-frame, weighing in at 40 ounces sporting a 6-inch barrel. It’s a sturdy double-action revolver with all the trappings of its centrefire brothers. Classic Smith lines are represented with a deep blue finish. It looks at home next to larger revolvers, making no compromise on features, function, build quality or aesthetics. If any part of you appreciates old-school (not quite olde-tyme a la Schofield) revolvers, then there is no way you can hate the way a Model 17 looks.

Functionally, it’s typical modern Smith & Wesson wheelgun fare. A release on the frame pushes forward to swing out the six-chambered cylinder. The barrel is free from an underlug, fluting or ejector rod housing, which cuts down weight but exposes one of the more delicate parts of the gun to potential damage. Unless you’re pistol-whipping platemail-clad assailants into submission with your .22 revolver, I doubt this will be an issue. 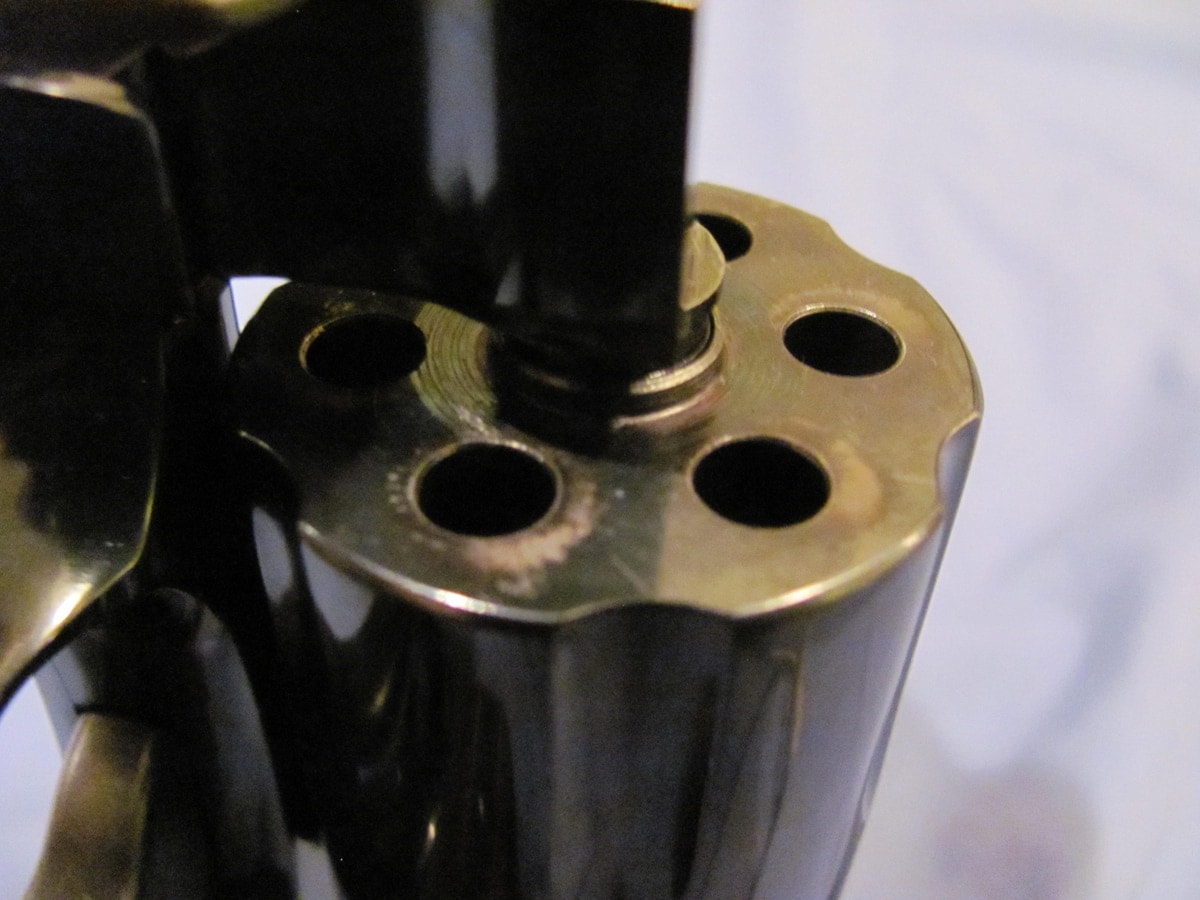 The price is also in line with modern Smith & Wesson revolvers. I was lucky to bag my 17-9 for $700 used, but the current Masterpiece version lists for $959 MSRP on Smith & Wesson’s website and used M17s commonly run $700 to $900 on Gunbroker.com. A glimpse at Taurus and Ruger .22 revolvers show the Model 17 sits atop the price spectrum. There’s no doubt this is a premium gun, and the cost reflects it.

Price aside, any 17-9 models of the gun will also feature Smith & Wesson’s embarrassing concession to gun control advocates, the “internal safety lock”. This is a hole over the cylinder release, into which you can insert a hilariously tiny key and turn it to disable the firearm. This ‘feature’ isn’t a dealbreaker, but it’s worth pointing out. Older models are desirable as they lack the hole.

The Model 17 has a case-hardened steel trigger and hammer. The hammer is nice wide and well checkered, making it easy to pull back with a single thumb.

Topping the gun off are traditional adjustable sights, with a rear leaf sight with a white box joining a front black partridge post.

Overall, this is a full-sized target revolver that happens to shoot tiny, affordable cartridges and it sells at a premium price. So the questions becomes, “Does performance justify the cost?”

The Model 17 is clearly a target revolver. For that purpose, it needs to be mechanically sound but problems of this foundational nature are rare in modern Smiths, so I can’t criticize them meaningfully. These problems do happen, but these issues seem rare and my Model 17 is defect-free. 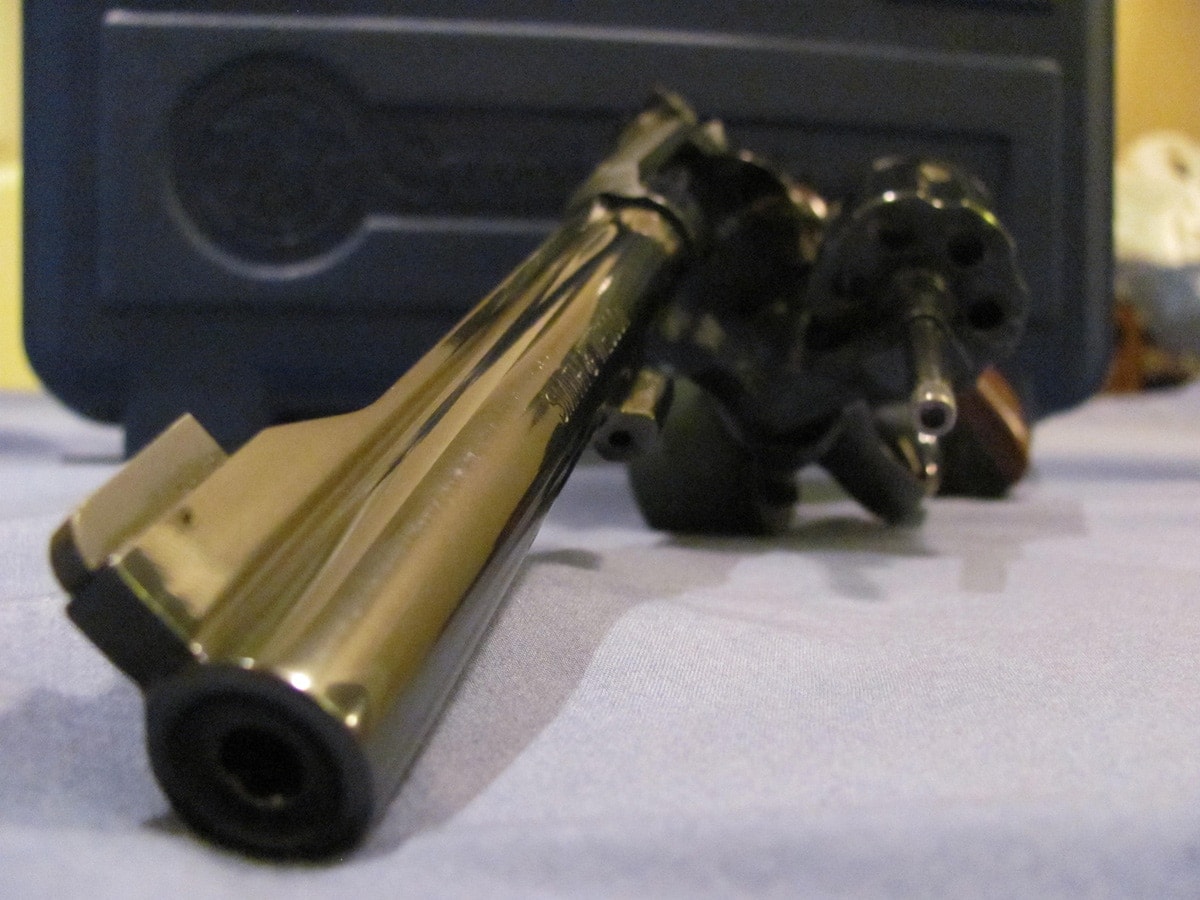 Target guns also need good triggers, sights, and comfortable grips. And I can certainly talk about those.

Up front, the double-action trigger is heavy. It breaks at 15.3 pounds. This probably sounds outrageous, but double-action rimfire revolvers often have heavy triggers. A lighter trigger on a rimfire gun is prone to failing to ignite the cartridge. I’ve tried reducing the weight of the trigger by swapping springs and it produces more failures to fire via light strikes than I’m comfortable with. For a double-action .22 LR revolver, a heavy trigger is a fact of life.

But the ‘heavy trigger’ is also pretty good if you have the finger strength (it’s worth noting smaller-framed people who I’ve taken shooting cannot comfortably fire the gun DA at all). It’s a stack-free pull straight back with a crisp break. It’s also subjectively better than similar .22 DA revolvers on the market I’ve tried.

The single-action trigger is great for a gun that’s had no custom work done with a squeaky-clean 5.4-pound break. This compares well with single-action rimfire revolvers that don’t even offer the option to shoot DA if you’re up for the challenge.

The sights are standard fare. The black front post isn’t ideal, but that’s easily remedied with a little paint and know-how. Optionally, a replacement front sight wouldn’t be a bad investment but I don’t feel it’s necessary. The sight picture is clear and functional. 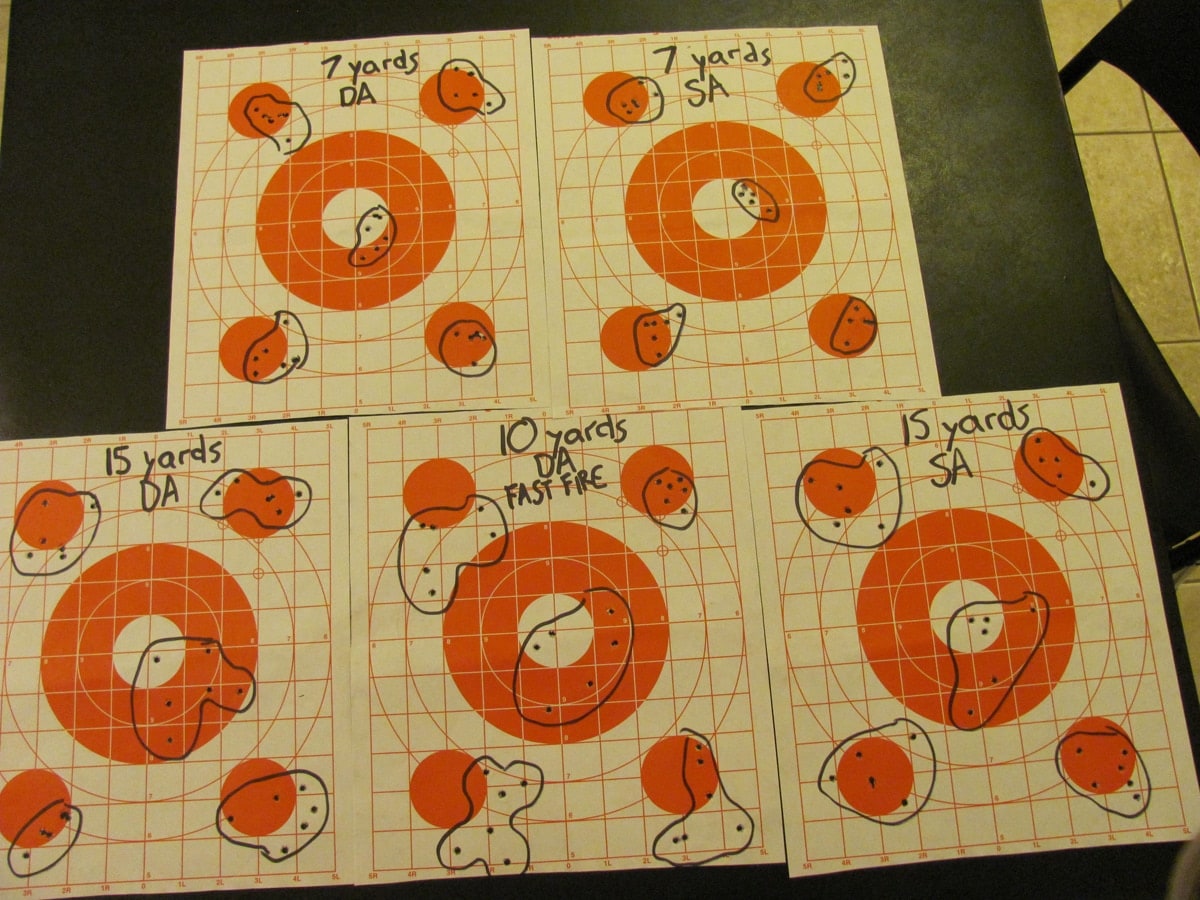 You’ll immediately note two things: I’m not a very good shot, and despite that the Model 17 makes me look mediocre, at least. This revolver shoots better than I deserve.

But the tight tolerances that allow the Model 17 to shoot well have a tradeoff. During a good shooting session, you will soon notice the buildup of carbon and even lead. The front of the cylinder is filthy within the first dozen shots.  The top strap, forcing cone and chamber interiors all build up residue fast. This will lead to some resistance feeding the rounds into the gun. Add some residue under the ejector rod, on the forcing cone and front face of the cylinder, and closing the cylinder can get stiff. 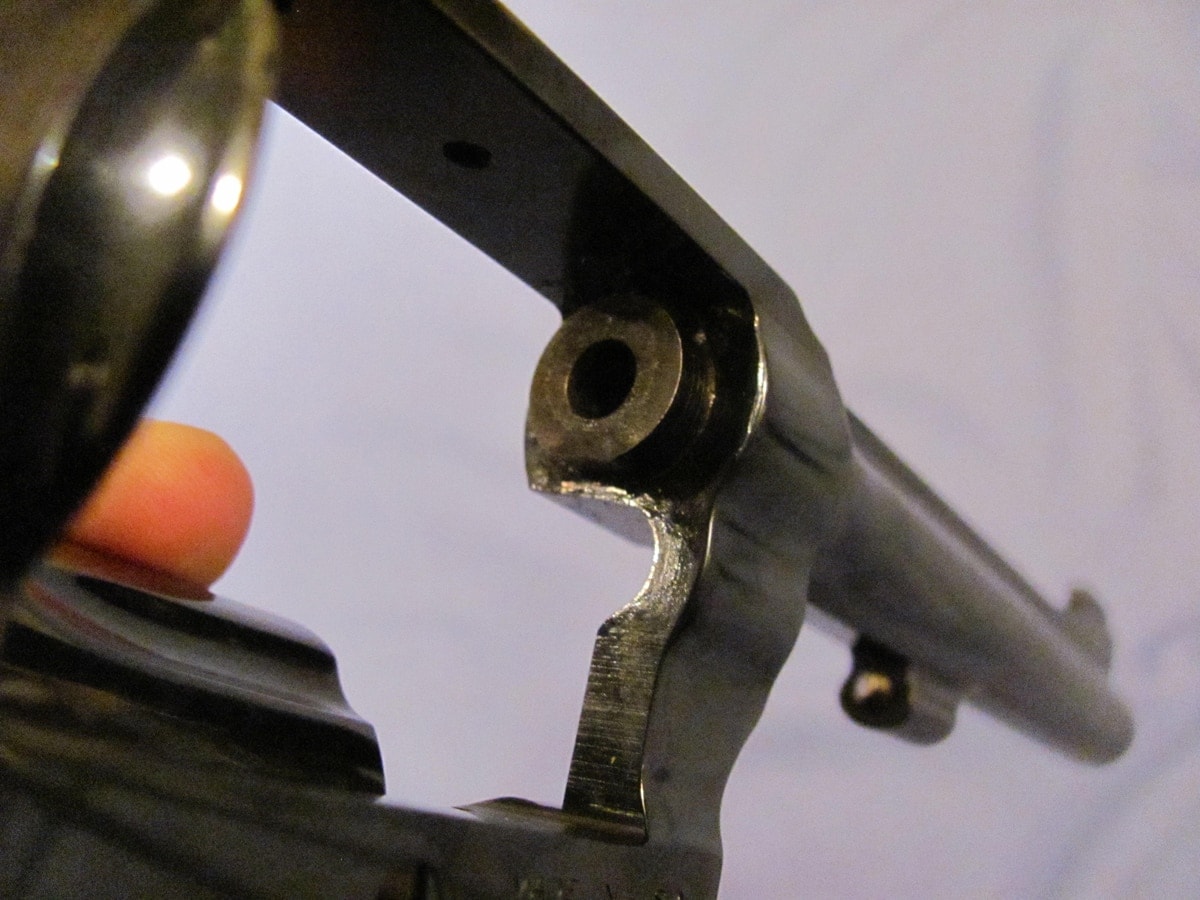 Tight tolerances plus dirty ammo mean the Model 17 is not a great gun for a lazy owner. When I take this revolver out, I bring a brush for the inside of the cylinders at the least. By cleaning the chambers every hundred rounds or so during the session, you can avoid the frustration of sticky casings. After a shooting session, the gun is filthy and can take time to clean up. If you’re slovenly about cleaning guns, then stay away from the Model 17. It will either frustrate you into selling it, or maybe turn you into a compulsive cleaner, which I guess probably wouldn’t be all that bad.

One last thing I’d like to note about this otherwise-great gun is the stock grips. They’re tiny slivers of wood that are checkered and have a Smith & Wesson medallion on them. While they’re okay, I still find they look scrawny, not sleek. Picking the gun up doesn’t help their case. People with even medium-sized hands may find themselves making awkward adjustments to your grip as your palm dwarfs the available real estate on the wood. Fingers overlap oddly, especially if you’re used to the fuller grips on modern Ruger or Smith offerings. What are these, grips for ants?

Who doesn’t like nice things? Gun folk tend to appreciate the ‘total package’ of a mechanically sound, visually attractive, high-performance firearm. I definitely think the Smith & Wesson Model 17 meets all those criteria, and classifies as a ‘nice thing’. Small grips and being needy in the cleaning department are pretty insubstantial compared to the upsides offered. Technical stuff aside, it’s fun as hell to use. I love blasting away with it and not having that awful gremlin of ‘financial responsibility’ gnawing at my frontal lobe, muttering, “this range session is costing a set of winter tires.” The fact that I can shoot this volume of ammunition so well with this gun makes me happy to recommend it without reservations. 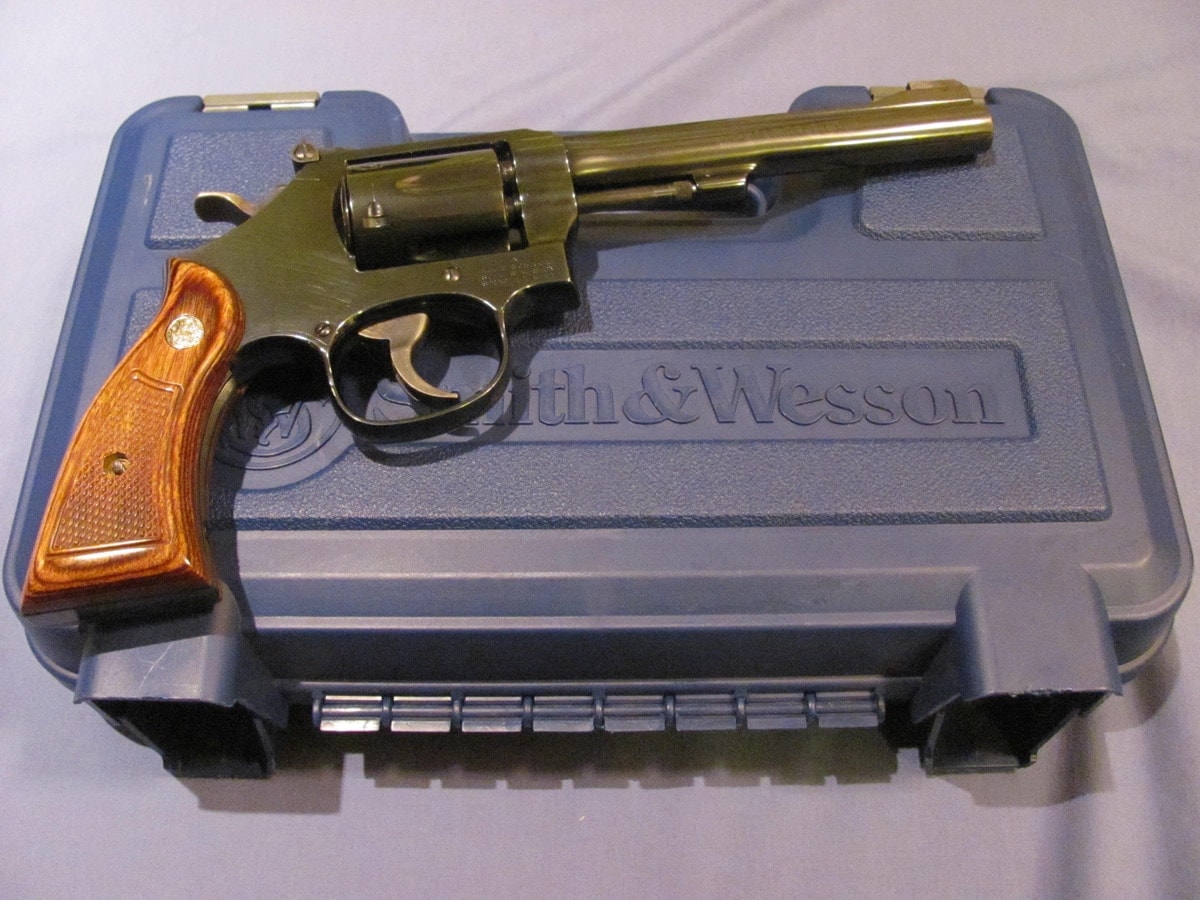 But I realize my recommendation needs to be tempered by that damn financial responsibility gremlin. The Model 17 is pricy. I can understand why people balk at the idea of spending so much on ‘just a .22’. But think about it: What are you going to shoot more often? Your Freedom Arms .454 Casull, where ammo runs $3 per shot, or your Model 17? To me, by sheer volume of use it makes good sense to make a serious investment in a .22 handgun. For the discerning revolver fan, the Model 17 is a premium piece meets that criteria nicely.