The package that is the Smith & Wesson M&P15 MOE Mid Magpul rifle contains the quality of an iconic brand and the convenience of Magpul furniture. Essentially the rifle has modifications shooters would normally make on their own. The kit is equipped with Magpul Original Equipment that comprises a vertical fore grip, pistol grip, adjustable buttstock, hand guards, and a folding Magpul back-up rear sight. The package also includes a 30-round PMag and two DVDs on tactical shooting, so during the buying frenzy that we’re encountering now this M&P15 might be your best option if you’re looking to buy an AR.

This is my rifle. There are many like it, but this one…

Magpul products are very intuitive, lightweight, durable and stylized, which are reasons why there are a handful of co-branded package deals like this. And that begs a very important question: Why Smith & Wesson?

When you compare how well competitively priced, big brand ARs perform against one another it can be difficult to differentiate the experience. It’s like hearing covers of the Irish folk song “I’ll Tell Me Ma” back-to-back – same chords and chorus, but a different band. What separates the wheat from the chaff is the minutia. And for ARs, we look at the ease of use and modification.

The M&P15 is pretty easy to use and modify. The hand guards have a triangular shape but are rounded on the base, so if you choose not to attach the vertical grip it’s still comfortable to hold. The back-up iron sites along with the Picatinny rail make it easy to mount optics. Magpul touts that the pistol grip is universal in that they use checkering rather than finger grooves and on top of that the grip doubles as a storage compartment — one big enough for batteries or some cleaning gear.

These co-branded rifles use a lower receiver based on Magpul’s original billet design. It features forward serrations on the magwell, a flared magwell for easy insertion of a magazine, an integrated trigger guard so you can wear gloves while you shoot, and finger shelves to rest your booger hook when you’re not using it. 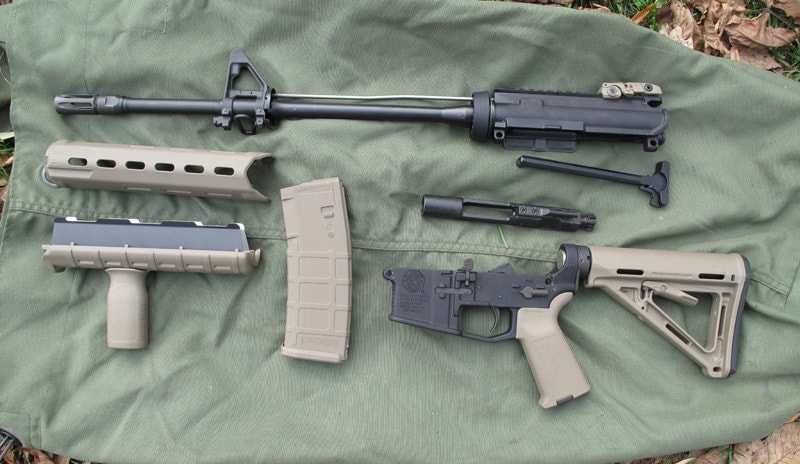 Lastly, M&P15 MOE Mid Magpul rifles are only available as semi-autos chambered in .223/5.56. They comes with a 16-inch barrel with the overall length ranging from 33.75 to 37 inches, and weigh in at 6.54 pounds unloaded. They’re available in either flat dark earth or black.

Guns.com had the unique experience to perform three tests on the Smith & Wesson M&P15 MOE Mid Magpul rifle. The first two were range tests where we took the gun out to our stamping grounds to shoot papter, bowling pins, rubber targets and whatnot at various distances. The third was a three-day prairie dog hunt in a remote location in Wyoming in July. Although all three experiences provided adequate means to push the rifle to its limits, one proved more satisfying than the others (guess which one?).

In the first test we fired a hundred rounds of Federal Premium and Nosler Varmagedon ammo at various distances (starting at 50 yards) both standing and at the bench until rain poured down upon us. In wet conditions, and right out of the box, the rifle performed flawlessly.

The second test we had nice, dry, and fair weathered conditions and the rifle delivered the same results. Standing from 50 yards we shot palm-sized groups into the paper targets. Pop cans and clays exploded, and in more controlled situations, like sitting or prone, groups varied from half an inch to 1.5-inches depending on the shooter.

Although in Wyoming there were a slew of rifles to hunt with, the M&P15 MOE Mid Magpul was the primary arm. Under the sun, in the mud, against the wind and under a soft drizzle, the gun performed exactly how it was supposed to. It was an effective tool to pick off the little varmints that burrowed tunnels under the ground and spread disease. Never a jam or a failure of any kind (except for a few missed prairie dogs that is). 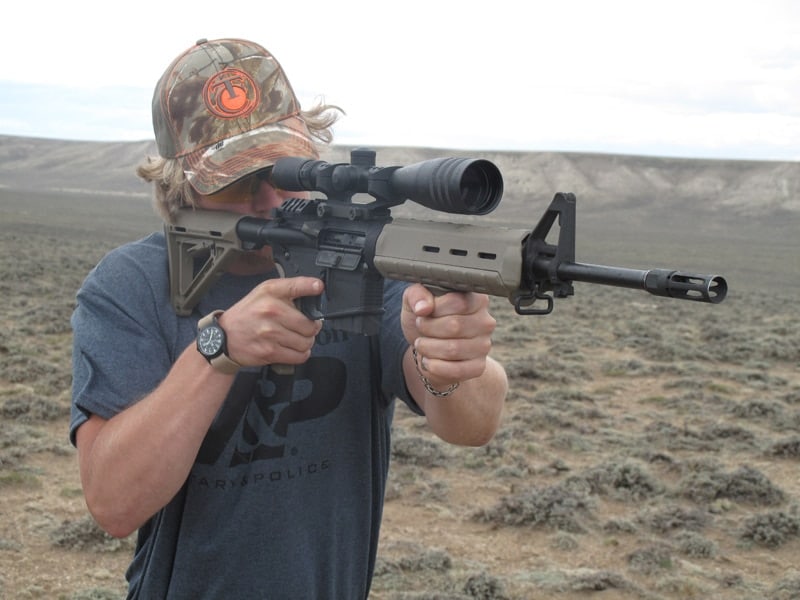 We’ll be honest: it might not be easy to find this rifle. Actually, it might be hard to find most ARs. But if you do and for a fair price, we suggest taking it. MSRP is set at $1259 and online it was listed for around $1000. That price includes roughly $300 worth of Magpul accessories, big brand manufacturing and an overall decent performance.