Shooters looking for to buy the highest quality .357 Magnum revolver for under a $1,000 will always arrive at the same conclusion: the Smith & Wesson model 686.

If you’re being attacked by anything in North America on two or four legs, the 686 can put an abrupt stop to your would-be assailant’s nefarious plans. The 686 is a tack-driving, fire-breathing heavy-hitter, but what about armed security, wintertime concealed carry or competitive shooting? The 686 is simply too large for the last two applications, and even if it weren’t, the wide serrated trigger and Hogue target grips aren’t suited to double-action, defensive shooting. Fret not, fellow six-shooter enthusiasts, Smith has heard our cries, and has responded with the Smith & Wesson 686, Stock Service Revolver (SSR)

Introduced in 1980, the Model 686 is the stainless twin brother of the model 586 from Smith. Both revolvers hold either six, or seven rounds of .357 Magnum or .38 Special, and use a double, single-action trigger mechanism. The 686 is based on the the standard model 10 revolver by Smith & Wesson, though unlike it the Model 10, is constructed of more durable steel and can safely fire .357 Magnum rounds. Additionally, the 686 series of wheel guns now feature internal locking mechanisms, that some decry as a liability. 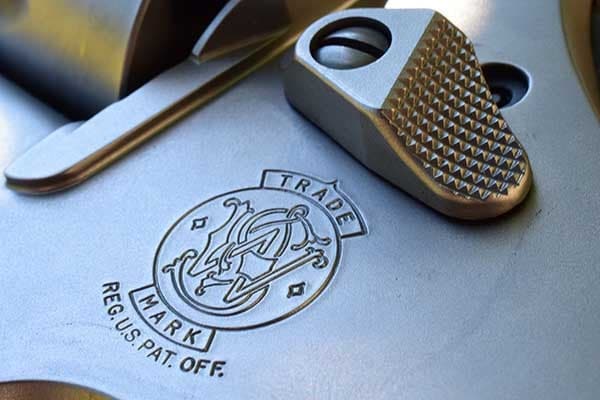 Naysayers fear Smith guns will lock themselves during extreme recoil, or lack of maintenance. While their concerns aren’t unfounded, in my personal experience, both of my post-lock Smith & Wesson revolvers have never locked themselves. Each has over 2,000 rounds through them, and one of them has never been cleaned. The only perceivable difference between a pre and post-lock revolver is the smoothness of the trigger out of the box; though this will polish itself with use.

The 686 SSR derives its extra moniker from the International Defensive Pistol Association (IDPA) revolver division of the same name: Stock Service Revolver. In this division, only revolvers that hold six rounds, weigh less than 42 ounces have a barrel no longer than four and one fifth inches long and a couple of other qualifying aspects are permitted. As you may have guessed from the name, the 686 SSR meets all of these requirements, making it an ideal IDPA SSR revolver, built from the ground up. 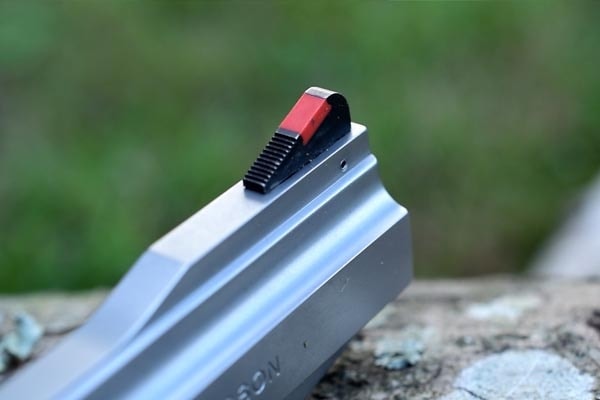 The 686 SSR front sight is easily removed by driving out the roll-pin beneath it. (Photo: Jim Grant)

What does that mean for the average shooter? Basically it translates into a great first gun for anyone looking for a fast-shooting, dependable six-shooter with enough stopping power to end any threat with a single well-placed round. The weapon is catered towards owners who shoot primarily in double action, and includes a slew of additional features that make it more versatile than standard 686 revolvers.

For instance, the 686 ships with a removable front sight post, so owners who wish to install a phosphorescent sight for night-shooting don’t have to take their revolver to a gunsmith. Also, the 686’s rear sight is fully adjustable for both windage and drop, making the stainless lead-slinger extraordinarily versatile weapon, since it can be dialed in to your desired defensive round. The barrel, which is over four inches long, features a target crown to protect the muzzle from accuracy-ruining damage, and it ships with two different grips: finger-grooved Hogue and rounded wooden grip panels featuring the letters, “SSR” handsomely embossed in them. All these features would lead most to believe the gun was designed to target shooting only, but that’s not the case. The beveled grips facilitate high-grip, rapid double-action shooting – a must when competing in IDPA or defending one’s life. 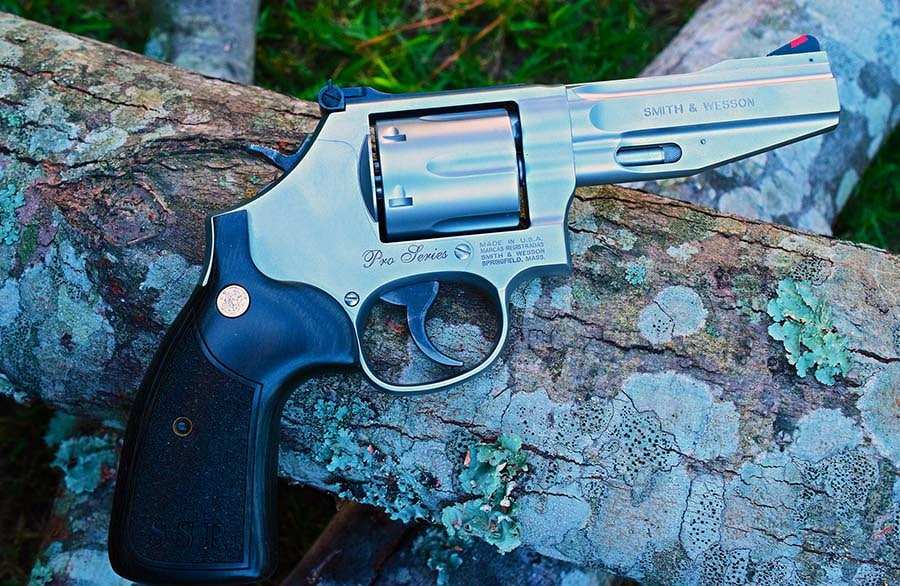 The folks at Smith & Wesson made this even easier with the addition of a bossed mainspring and beveled charge holes. If you’re wondering what a bossed mainspring is, you’re not alone. The term is not in common parlance with most shooters, but basically means there is a boss, or rib running the length of the mainspring. This rib reduces the amount of force necessary to pull the trigger, and lends itself to better accuracy. The chamfered charge holes make inserting fresh rounds easier, thus reducing the time required to reload. Clearly, this is a competition piece. 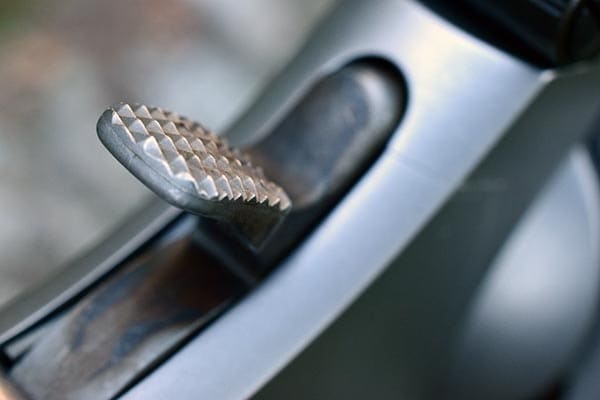 Both the SSR’s hammer and trigger are hammer-forged (Photo: Jim Grant)

Where most modern Smith and Wesson revolvers use injection molded triggers and hammer, the SSR utilizes a more traditional, hammer-forged trigger and hammer. While unimportant to most shooters, it adds longevity to both pieces and under normal conditions, will likely outlast the average shooter and whomever inherits it.

So the 686 SSR is loaded with nearly every desirable feature from the factory, how does it shoot? Better than me. The trigger is very smooth, especially for a modern, factory Smith & Wesson, and the sights are clear and easily acquired during rapid-firing sessions. 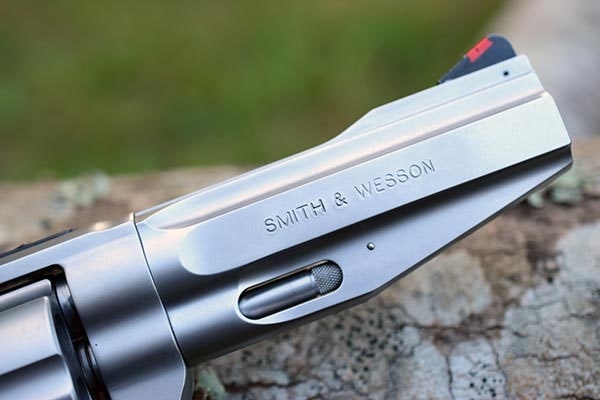 The unique shape of the SSR’s barrel lug is designed to draw more quickly from a holster than traditional ones (Photo: Jim Grant)

Recoil depends on the grips and ammunition used. With the rubber Hogue grips, the gun was comfortable with all rounds tested, including the dreaded 180 grain hard cast lead, “bear-slayer”. The wooden grips are less comfortable to shoot with heavier loads, but were much faster when firing double-action shots. If you intend to run this gun in IDPA or any shooting competition where there is no “power factor”, simply a timer, leave the wooden grips on and shoot .38 specials.  It might not be as fun as the Magnum rounds, but your times will be much faster. Plus you can use some of that loot you win to buy a .44 Magnum Dirty-Harry revolver from Smith, to get your masochistic Magnum recoil fix.

Personally, I found the balance of the 686 SSR to be superior to even my pre-lock 10-6, I suspect the strange barrel shroud shape has something to do with this, but the point of balance seems to be just behind the trigger guard. This makes drawing the weapon quicker than standard, front-heavy 686 revolvers, but also translates to slightly increased perceived recoil. 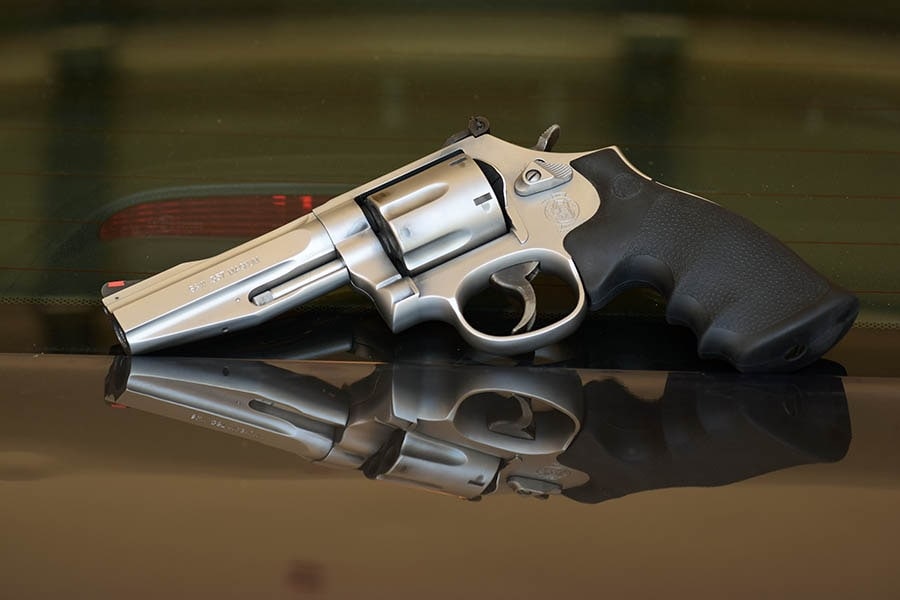 When I first got involved in IDPA a few years back I shot in two divisions: Stock Service Pistol and Stock Service Revolver. If the 686 SSR had existed when I started, it would have undoubtedly been my first choice for SSR gun. With an MSRP of $999, the SSR is only $70 more than a standard 686, and gives a shooter the option of competing later down the line. With an improved trigger pull, beveled charge holes and two sets of grips, it’s a no-brainer to purchase one over a standard 686.