My mom called me a couple of weeks ago, looking for a concealed carry handgun.  After talking for a couple of hours about all of the various options, we had narrowed it down.

She didn’t want an automatic, though she was attracted to the versatility of the 9mm.  She is familiar enough with wheel guns to trust in her abilities with a revolver.  She wants a small gun, but nothing microscopic.

Then what?  I know that she can shoot, and is strong enough to handle a .357. The .357 is a great round for defense against two legged and four legged vermin.  But the gun will also shoot a variety of other rounds.

.38 caliber rounds come in many different flavors, including shot shells and frangible bullets.  And she spends enough time in the woods that she might benefit from a careful staged shot — so the gun needs to be double action, but not double action only.

When we’d concluded our deliberations, we’d decided on some basics.  She needs a traditional snub-nosed revolver chambered in .357.  It needs an exposed hammer for versatility, and it should be stainless (just to make care that much easier).  To make it truly concealable, it should have a barrel that comes in at, or just over the two inch mark.

So mom, here you go.  A shopping guide of sorts.

We’ll start at the bottom, price wise.  Like all three guns in this list, the Taurus 605 is a five shot.

While that is on the low end of what seems practical, the five shot cylinder has a narrower diameter than the six or seven shot cylinders sometimes found on revolvers.  That keeps the width down, making it easier to conceal. 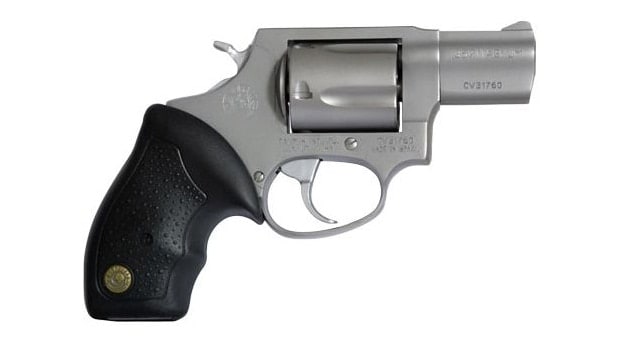 The Taurus 605 has a short grip, and the shortest of these three guns.  The two finger grip is common on hammerless .357s by all three companies.  But they are hard to hold onto.  I find that my pinkie pushes up on the bottom of the grip and provides a reasonable pressure, but I’d rather have a solid place to put my pinkie.

The fit of the Taurus is fine.  It rolls nicely, locks up positively, and has tight tolerances.  Yet the finish of these guns isn’t a fine as it is on the higher priced models.  This is one of the way that Taurus keeps prices down and it shows.

Still, the gun shoots straight.  And this isn’t the type of firearm that will be negatively affected by average workmanship.  The Taurus is a great gun for the money.  MSRP is $492.

If there is one thing I really don’t like, it is the fixed front blade sight.  But that’s not a deal breaker.

One thing that has always struck me about the SP101 is the weight.  I like a heavy gun.  I like knowing it is there.  I’m not adversely affected by the increase in weight, though I know some are.  It is something to consider.  At 26 ounces, the SP101 is the heaviest of the three guns (if only by two or four ounces) 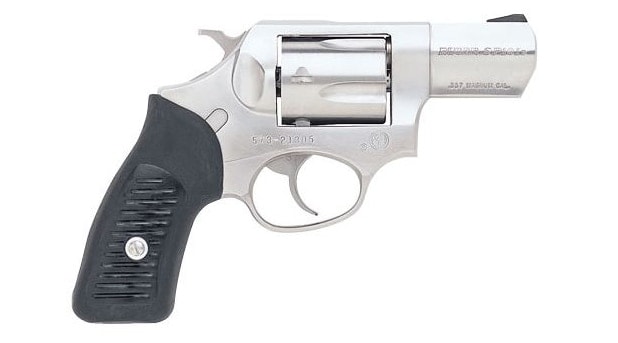 The Ruger has a very large transfer bar.  Both the Taurus and the Ruger use this feature, which helps to ensure that the gun isn’t going to go off if it is dropped and hits hammer first (because the bar drops below the pin and the hammer can’t make contact).

For such a heavy gun, I think Ruger makes some sacrifices on the grip.  I can get three fingers on the grip, but then my grip feels too high.  Here’s the paradox — when I shoot double action, I tend to hold the full grip.  If I’m shooting single action, I drop the pinky.  Go figure.

The front sight on the SP101 is pinned, so it could be replaced with a fiber-optic or night sight.  And I’d want a night sight, for sure.

The finish on the Ruger is better than that of the Taurus.  The cylinder doesn’t spin as smoothly as I’d like, but that hardly matters.  This is a solid gun with a long history.  Its popularity and versatility will keep it in Ruger’s catalog for years to come. MSRP on the SP101 in .357 is $639.

I owned a Model 60-15 with a three-inch barrel for a long time.  I loved it.  I sold it to a friend with the understanding that if he ever decides to sell it, I get first dibs.  The extra inch doesn’t seem like it would make that big of a difference, but it does.  It increases the gun’s accuracy and makes it hard to find a holster.

The more traditional snub-nosed Model 60 still shoots straight, and is much easier to holster. 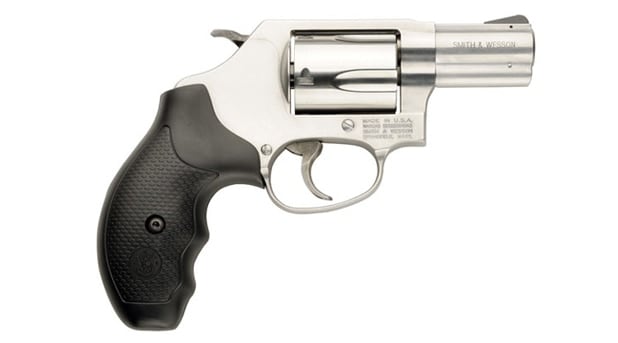 The finish on most Smith & Wesson revolvers is noticeably smoother than that of a Taurus or a Ruger.  If you ever have the opportunity to place these three guns on the counter and hold each in turn, you’ll know exactly what I mean.  The hammer moves smoothly.  The trigger has no grit.  The cylinder spins freely.  The grip is a bit bulkier, but it is the best of the three.  And it is a J-frame revolver, so the larger grip can be replaced with smaller ones or tiny slick slab grips.  MSRP $729.

Which would I buy if I were looking for a new snub-nosed revolver?  Probably the Smith & Wesson.  That is exactly what I bought when I had these same three options.  I had put all three on the counter and I was swayed by the obvious quality of the Model 60.

But that quality doesn’t effect how the gun shoots.  I have shot all three of these guns, numerous times, and I can achieve the exact same results with all three.

Here’s what I recommended to my mother — the Ruger.  The decision should come down to a balance between price and quality.  The Ruger SP101 is the perfect mix of the two.  While the Smith & Wesson is noticeably nicer, that level of quality is mostly aesthetic.

What would you suggest?