Springfield Mil Spec Review: Its got that Retro 1911 feel (VIDEO)

Springfield Armory knows how to make a 1911. I’ve never shot one of their .45s that I didn’t like, and the Mil Spec 1911 is no exception. This is a fine entry-level pistol, and a lot more gun than you get from most of Springfield’s competition handguns.

What is Mil-Spec anyhow?

I’m not really sure. The abbreviation is obvious enough. This is a gun that is up to the military’s specifications, but I don’t know that there was ever a gun in service with the U.S. military that looked exactly like this one.

Google Mil Spec and you’ll see that the answer isn’t always clear. With regards to the 1911, it implies standardization, a base level of performance (and reliability), and an ability to swap out stock parts, but that may not get at Springfield’s motive for naming this gun the Mil Spec. 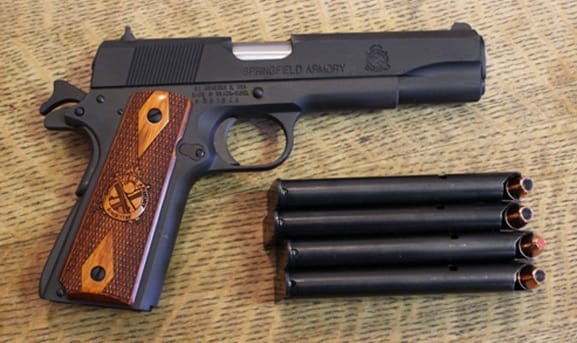 Springfield had been making a G.I. version of this gun that had a retro feel. You know, the good-ol’-days fighting National Socialism, Fascism and Imperialism all at the same damn time.

The G.I. gun was a pretty good knock off of a WWII issue 1911A1. The pistol was popular with many people who wanted a 1911 with that look. Reenactors loved the gun. WWII reenactors sometimes have trouble finding gear and guns that aren’t antiques—or antiqued.

Colt made some 1911s that fit the bill—if you have money to burn. The Springfield G.I. filled the low cost niche quite well.

But they stopped making them. Springfield Armory pulled the G.I. from the catalog at the end of 2011. I’m still not sure why. I asked my contact at Springfield—she wasn’t sure either. Someone at Springfield knows, I’m sure.

Now the Mil Spec is the bottom rung of the Springfield Armory ladder and it is not, strictly speaking, a mid century A1. While it shares some of the features of the WWII era guns, it has diagonal slide serrations, a polished feed ramp, a beveled magazine well, and three-dot sights. The ejection port is lowered and flared. And it lacks the firing pin block of the series 80 Colt 1911s.

Springfield’s website says that all of these features were used by the military before the perennial 1911 was ousted by the Beretta contract the 1980s. So that must be what they mean by Mil Spec. Maybe this is the gun for those nostalgic for their late 70s military service.

I don’t know. I was still a Boy Scout when Beretta ousted the 1911. And I’m having trouble finding an actual military issue 1911A1 dated from the era.

I’m making too much of it. It is a fine gun, no matter what you call it. 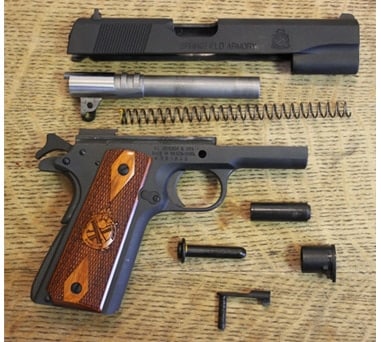 It feels like an old fashioned .45. The most noticeable difference would be the arched mainspring housing and the slim dimensions of the grip safety. It’s big and heavy and steel. The Mil Spec is parkerized, so it doesn’t have that slick blued feel of the old Colts. But the finish is durable and looks good on the gun.

I’m getting used to Springfield’s Range Officer. I like beaver-tails. The narrow grip safeties of the old 1911s feel scant. I don’t have much difficulty with hammer bite, but I always think I will—and that messes with my head while I’m shooting.

But that’s my problem. The extended safety on an A1s is sufficient. And it is on the Mil Spec. The arched mainspring housing adds a little more to the width of the grip.

If there is one thing I’d point out about the Mil Spec that defies the Mil Spec cliché, it would be the fit. This gun is not a rickety rattle-trap. The fit is consistent with what I’ve come to expect from Springfield.

The grips are wooden, heavily checkered, and well rounded. While this makes holding the Mil Spec relatively easy, the grips add to the girth. Many 1911 shooters prefer the flat grip panels, and the Mil Spec comes with more narrow black plastic grips, too. I’ve heard they are easier to conceal and that the distinct angles make pointing the gun easier (because the target will line up with the long flat side of the grip). I haven’t tested that theory, yet—just passing on gossip.

The Mil Spec shoots straight. The three-dot sights are basic, but functional. They are so much easier to use than the old hump-and-bump 1911 sights. They are also more intuitive than the big target sights on the Range Officer. More of the target is visible.

I was curious to see how the three-dot sights changed my target acquisition. And I am a bit faster with the three-dots, and a bit looser. My groups are not as tight.

But the Mil Spec has more common aspirations. The name implies martial applications. Yet, the accuracy is really quite good. 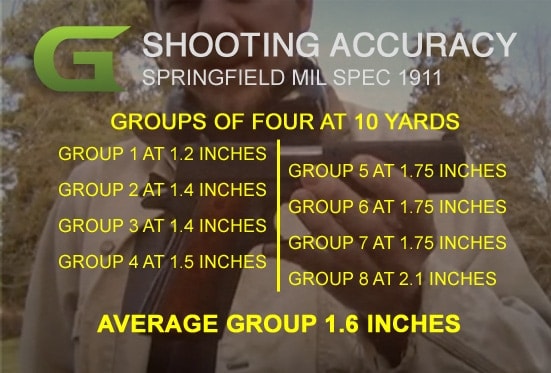 At 10 yards, the Mil Spec was shooting about half an inch left. That’s my only complaint. The farther out I went, the more I had to compensate. If this were my Mil Spec, I’d work on the sights.

I really like this gun. I had no difficulties. No failures to feed. No issues with any of my magazines. No ammunition oddities. It does was a 1911 is supposed to do.

The Springfield Armory Mil Spec is a great entry-level 1911. With a price at about $800, they are a bit more expensive than some of the low-end competition, but the quality is noticeable. This would be a great place to start if you wanted to customize a 1911. It would be a great and reliable gun as it is.

If you are looking for a 1911 on a budget, and don’t want one that is stainless and too modern looking, shoot a Mil Spec.