Last year in my review of the Springfield EMP I concluded, “$1,100 is more than I have spent on any handgun previously and I don’t really need another concealed carry gun, which is also too heavy for pocket carry. I watched it disappear into the gun case … Guess I should start saving my money.”

Well, I had a change of heart. I should never have bothered saving the money to buy the gun. Nope. I should have sold something to get it because then I would’ve gotten it sooner. 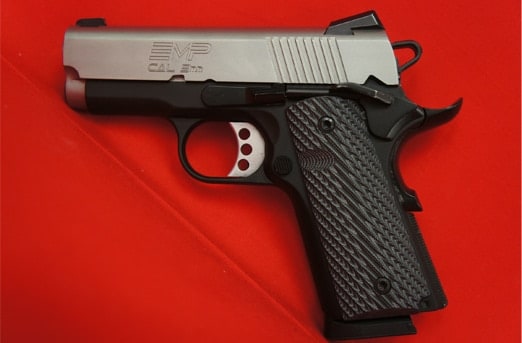 Putting several hundred rounds through the gun, cleaning it a couple of times, carrying it as my primary self-defense gun for a week at a time – all of this has provided me ample opportunity to re-evaluate the EMP. And I am still impressed.

The first thing I did after taking the gun home was to take it apart and clean it. It didn’t need it – it came clean and properly lubed – but this is my standard practice with a new gun. And with the EMP, it was the first chance I had to actually take one apart, since the one I tried previously belonged to my friend.

Disassembly was more or less routine for a 1911, but with two significant exceptions. The first is that the recoil spring is a captured assembly with the guide rod and using the little plastic clip Springfield provides makes it much easier to assemble and disassemble the gun. The other is that unlike most 1911s the EMP doesn’t have a barrel bushing – the barrel itself is flared out to match up to the slide. 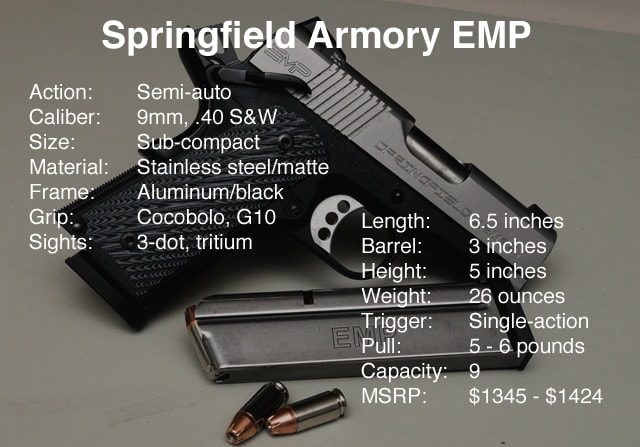 The gun then went for a trip out to the range with my wife and I. I put a couple hundred rounds of factory ball ammo (124 grain, standard pressure), a bit less of my practice reload ammo (same specs), and about 60 rounds of mixed premium self-defense ammo through the gun (about half of the different ammos tested for Ballistic By The Inch). Just to be sure, I ran a couple of extra magazines of my preferred carry ammo (Speer short-barrel 124 gr GDHP +P) through it. It ate everything. It ejected everything. It was accurate with everything. I didn’t have a single problem with it.

My wife, on the other hand, did. Several times she had problems with the gun cycling completely. She’s not too much for shooting semi-autos, as she greatly prefers revolvers, and it was clear that the problem was limp-wristing. With a short action and stiff recoil spring you need to hold the grip firmly so it function correctly.

I tried to reproduce the problem, but I couldn’t do it. I’m much more used to shooting a small semi-auto. As a point of information, I can create this problem with a number of other small semi-autos including one I own (a Rohrbaugh R9).

So, what did I think after putting the EMP through its paces?

Well, I still love it. It was easy for me to shoot well, in that “dynamic” way I mentioned in my previous review. At 10 and 25 yards I was able to consistently pop 6-inch spinner targets and tin cans, shifting quickly from one to the next.

The trigger is crisp and breaks cleanly, aiding accuracy. Recoil is very manageable for such a small gun, meaning you can stay on target for multiple shots. And shooting several hundred rounds through the gun in a short period of time didn’t leave my hands sore or me tired. 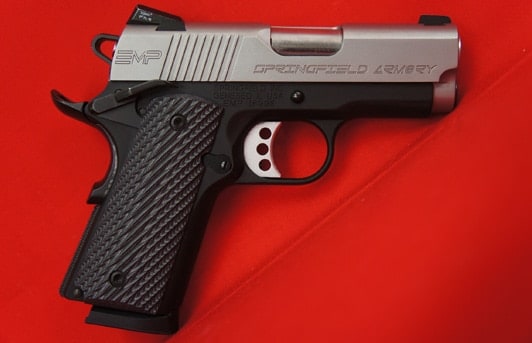 Yeah, there are a couple of really minor things. One is that the gun doesn’t have any stippling or grooves or anything on the front strap of the grip. With the aggressive relief on the G10 grips on the one I got, this isn’t really a problem, but something on the front would probably make the gun just that much more secure in the hand.

And those G10 grips do present a minor issue I hadn’t considered previously. The relief on them is so aggressive that I need to get a new holster for summer carry –one that comes with the gun, and the OWB pancake holster I had for a micro 1911 (which fits the EMP perfectly) doesn’t have a body shield and you need one or the grips will chew up your skin.

This is a hell of a gun. Small enough to carry comfortably, but equally comfortable for an extended trip to the range. At 27 ounces, it’s too heavy for a pocket gun, but I’m more than a bit leery of carrying a ‘cocked & locked’ 1911 in a pocket anyway. In terms of size for holster carry, the EMP is very comparable to a J-frame and holds twice the number of rounds.