Shooting the Springfield Range Officer reminds me of when I was a kid in Boy Scouts, and my Scout Master brought his old Colt 1911 A1 on one of our camping trips.  Under his strict watch, we each ran through a magazine.  I had never shot a semi-automatic pistol before.  Few of us had.

Let’s just say that we blew through the ammunition – not the targets.  They came out surprisingly clean.  When we complained about his shitty-old-gun, the grumpy-old-man would poke seven holes through the center of the target and shut us up good.

It didn’t matter that we weren’t good shots.  We loved it.  I’m sure we spent the rest of that camping trip decked out in fatigues running around in the woods like idiots.  By the end of that trip someone would have melted the soles of their jungle boots to their feet (trying to warm them up by the fire), or someone would try to run through a barbed wire fence.  You know – the Boy Scouts.  But I came away a different person.  I’d fallen in love with an old gun.

Too often these days, I shoot perfectly wonderful 1911s and don’t have an ounce of that feeling.  That’s what makes this difficult to write about – I’m not sure I can even define the feeling.  I’m not sentimental about that moment – that campout.  What I feel is nostalgia for something I hadn’t ever experienced.

That long winded introduction is just to say that I have that feeling again.  And this time, I can hit what I’m aiming at. 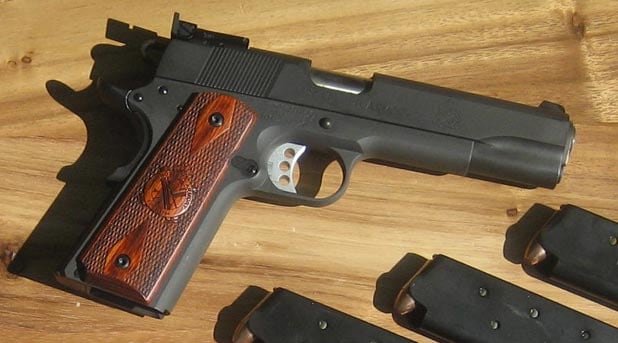 What makes the Range Officer new?

This is a relatively easy question to answer.  The Range Officer is a modified 1911 designed for accuracy.  Many of the modifications shooters make to stock 1911s are standard on the Range Officer.  It has a tight match grade barrel, the trigger is light and precise, and the nubby grip safety of the traditional 1911 has been replaced with the standard upgrade: a wide beaver tail and a fat protrusion that catches the palm better than the slender grip safety. 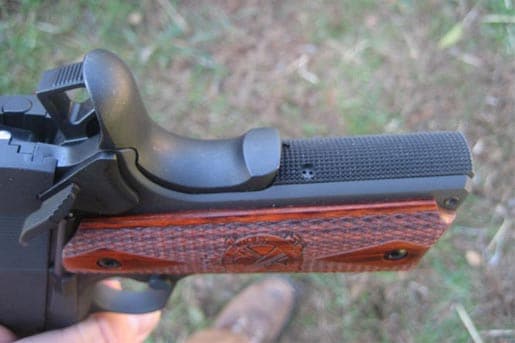 But that’s still not the answer.  What makes the Range Officer new is that you get a competition ready gun for under a thousand dollars.

What makes the Range Officer familiar?

The name itself implies its military heritage.  I can imagine a scenario similar to my scouting experience.  A bunch of grunts lined up on at the range, learning to negotiate with their government issue 1911s.  Behind them is the old man who never misses.  The Range Officer is named for him.

Except for the sights, the barrel lug, the barrel, the grip safety, the hammer and the trigger – this looks a lot like a Mil-Spec 1911 A1.  Obviously it’s not, but it has that flavor.  It pays homage to the original.  While so many folks are making tricked-out high-end guns that hardly resemble 1911s, Springfield has gone back to the roots of competition shooting.  They have designed the Range Officer to look like many of the early-modified competition guns – modified 1911 A1s.

Is there any competition for the Range Officer?  I honestly can’t find any.  As Ruger, Remington, Smith, SIG, and everyone else make more 1911s, the classifications seem to stratify into three distinct groups.  There are many foreign made 1911s that come in at or under five hundred bucks.

There is a second tier of guns hovering right under a grand.  Above that, are the others.  Even the low end of the tricked out guns – ones by Springfield, Kimber – are pricy.

I don’t compete.  I’m not that serious of a shooter, yet, I’ve wanted my guns to be as accurate as possible, if only for the hell-of-it.  And I know I’m not alone.  There are way too many people addicted to the various statistics of whatever they’re addicted to.  We’re addicted to the potential of what our gear can do. 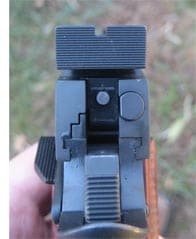 But consider this, if you haven’t already – this gun isn’t designed to be the perfect duty weapon. The sight alone is a disadvantage for those who wouldn’t shoot it regularly.  The rear sight is the size of a billboard.  The flat black back and black blade are not nearly as user friendly as typical three dot sights.  They are not, as they say in the parlance of our time, highly visible.  But they are easily adjustable.

This will seem like common sense to most everyone, I’m sure.  But remember that I’m a poet by trade.  An artist.  Science is not my thing – I was well into my thirties before I learned that an engineer was not someone who drove a train.

And it wasn’t all that long ago, relatively speaking, that I figured out that bullet weight is measured in grains.  Some bullets weigh more than others, even within the same caliber. And did you know that some ammunition has more powder?  It’s true!  There’s a lot of physics involved in these calculations, which is what those engineers must do when they’re not driving their trains.

I grew up shooting whatever ammunition I could get my hands on.  It never occurred to me that one brand of ammunition would behave differently from another – that JHP and FMJ rounds would hit in different places, even when aimed at the same point.  Instead of sighting in the gun, I would adjust to the gun.  Or the ammunition.  Or whatever.

But now I’ve seen the light.  The Range Officer’s sights, like most of the Bomar inspired sights, are easily adjusted.  If you shoot with two distinctly different types of ammunition, you can dial in the sights accordingly.  And once you acclimate to the more difficult task of target acquisition, the sights are incredibly reliable.  The long horizontal surface at the top of the rear sight makes leveling the pistol easy.

Rob Leatham, speaking on behalf of Springfield Armory, claimed the Range Officer will shoot inch wide groups at 25 yards.  Maybe he can shoot an inch wide group at 25 yards, but not me.  I pulled some remarkable groups with the Range Officer – much tighter than I normally shoot with a 1911.  But then I would get excited and let one fly.  So be it.  I’m comforted just knowing that it can shoot a group the size of a quarter.  That still impresses me. 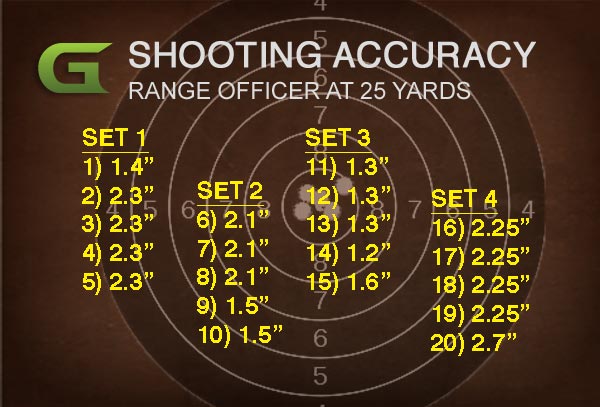 Have I already mentioned that I like the Range Officer?  It seems to be the considered opinion of many reviewers that this is a really great gun.  I was dubious at first.  If everyone else loves something, I’m often ambivalent.  But I did my homework before the gun arrived, and I couldn’t find fault with any of the tests or evaluations.  And the praise seemed genuine in a way that is rare.  More respectful.  And that is where I find myself at the end of this.

I respect what Springfield Armory has done with the Range Officer.  I like the Range Officer’s nod to the old school A1s, and its stunning performance capabilities.  It is a magnificent gun.