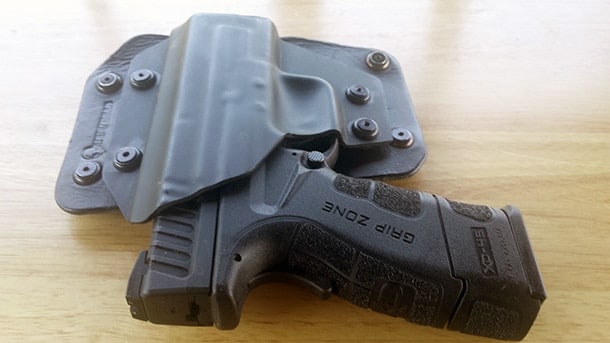 If you remember correctly, I was so totally impressed by the Springfield XD Mod.2’s performance that I said I was going to buy one. Well, I did. And while this gun performs as well at the range as I expected it to–without any hiccups, even after running several hundred rounds through it–there is one thing that has begun to irritate me after several weeks of concealed carry. This is what I’ll call “The Sandpaper effect.”

The Grip Zone on the Mod.2 provides excellent ergonomics with a full length grip feel, though it also led to uncomfortable grinding issues when carrying it concealed. (Photo: Joshua Gillem)

But, before we get to that, let’s talk about what this gun has going for it. Springfield took a proven platform and turned it into their Mod.2, with an unmistakably better feeling grip and a host of other upgrades. Truly, the gun performs flawlessly and feels awesome in hand. Springfield gets an A+ in this regard.

This is a concealed carry sub-compact pistol that is meant for self-defense–depending upon the caliber you choose, the gun comes with a 3 or 3.3 inch barrel. What this says to me is that until you need it, you’re supposed to forget that it is even there. 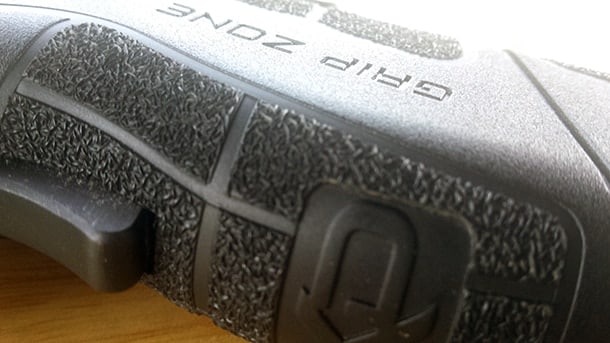 The comfort issue for me stems from the Grip Zone’s texture, which I call “The Sandpaper Effect.” This grip texture however, was the reason I liked the feel of it in my hands so much and I was reluctant to modify it. (Photo: Joshua Gillem)

The Mod.2 is small enough that the average person won’t even realize that you’re carrying the weapon when properly concealed. The only issue is that my side began to feel like it was in a 9th grader’s wood-shop class, with an endless amount of sanding in an attempt to get rid of my love-handles.

(As a side note, I want to be clear that this sandpaper feeling on my skin was not pain. It is somewhat of an irritant that I do think I could have gotten used to if I didn’t choose to retire this gun to a nightstand.)

It didn’t matter where on my body the gun sat, which is usually somewhere between the 2-4 o’clock positions depending on the holster, I still experienced this sanding feeling. Of course, the further the gun was from my body, the less I felt the sandpaper effect, but, let’s not forget, that this weapon is designed for concealment. Otherwise, it wouldn’t be a sub-compact gun, so putting it further from my body was not an option I was willing to entertain easily. 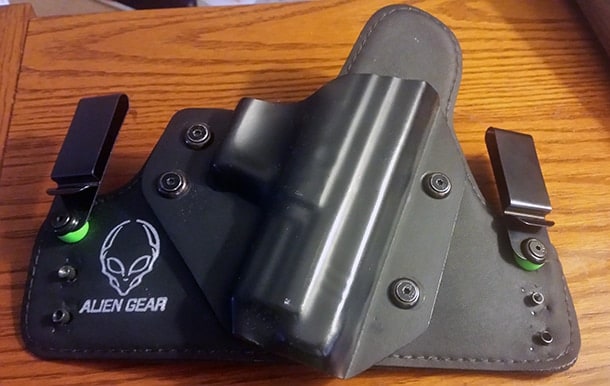 Alien Gear IWB with different shell. I also tried this with the Mod.2. (Photo: Joshua Gillem)

I wanted this gun to work out so much that I even bought a few different holsters in an attempt to get it to stop taking offense to my love-handles. After all, its performance and reliability at the range are second to none. There was one paddle holster that helped to minimize the sandpaper effect, but the gun sat so far from my body that it was nearly pointless to carry it as a concealed weapon.

Unfortunately, I’ve given up trying to make it work as my concealed carry gun. I think the main key to get it to work for you, is to put a barrier between it and your skin. That doesn’t work for me. Even though I live in Pennsylvania, I wear t-shirts all year long because I’m always hot and there is just no way I am going to wear an undershirt. However, if wearing an undershirt doesn’t bother you, this Springfield will work well.

In fact, any instance where you can have something in between the gun and your skin, will work.

You could also tape the part of the grip that is sanding your side. I didn’t opt to do this because I like the way the gun feels in my hand. I feel like taping part of the “grip zone” would take away from the ergonomics of the gun. It doesn’t mean that taping it is necessarily wrong, just that it’s not right for me. 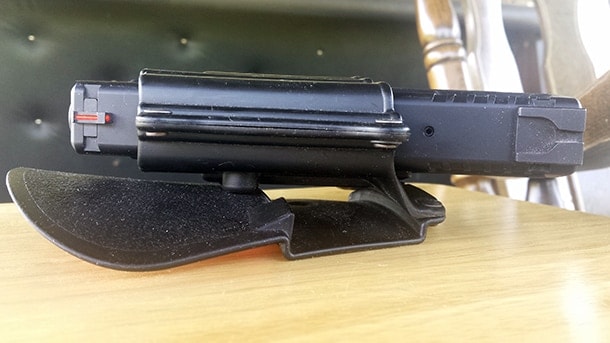 I’ll keep the gun as an addition to my home defense lineup – at least for now. I’m currently back to carrying my full-size service XD to keep the bad buys at bay. It is odd, but it is just a lot more comfortable to carry than the Mod.2 for me.

Springfield Armory hit a home run with the upgrades and ergonomics of the Mod.2. But, it does come at the price of being able to comfortably carry it in a concealed fashion. There are fixes to this, such as putting a barrier between it and your skin, or other methods of carry. For me, however, this gun will be used for something else other than concealment.