Gun Review: Springfield XD(M) made me a believer in polymer 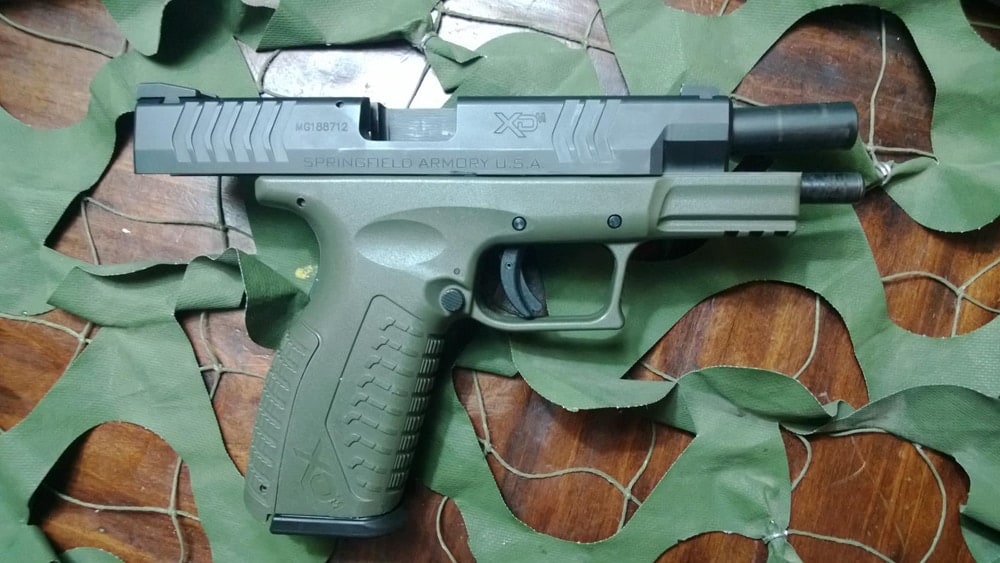 I have resisted the urge of buying a polymer-frame pistol until recently. Initially it was a certain amount of ignorance and assumption on my part, as they just didn’t fit with my own perceptions and proclivities. I shot a few polymer pistols and the experience left me less than impressed, so I thought I’d just stick with what I know, like 1911s. I know how to safely use them and read them — I like to know what likely condition my handgun is in just by looking at the controls. However, the Springfield XD(M) changed all that for me. Perhaps it was a stroke of luck, or the stars were aligned just right, but the XD(M) turned this non-believer.

The second round of the Springfield XD series, XD(M)s, have expanded controls. Compared to the original model, XD(M)s have a longer barrel, an ambidextrous magazine release, a larger magazine capacity, features interchangeable grips and it’s supposed to be easier to disassemble. 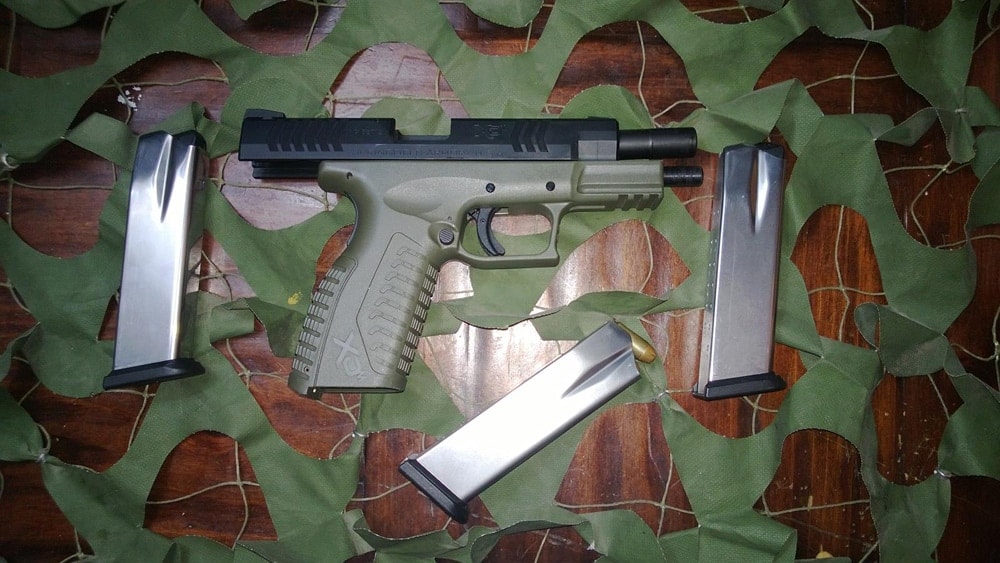 Springfield makes it rain with magazines. (Photo by Shawn Smith)

The specific XD(M) I’m talking about to day is chambered in .40 S&W, my round of choice, and has a 4.5-inch barrel. With a firm grip, it has relatively moderate muzzle flip, allowing for quicker follow up shots. Raising it to fire, the pistol falls nicely into your frame of reference, easily falling onto the target, even with follow up shots.

The XD(M) .40 S&W can feel a little heavy, weighing in at 32 ounces empty. Loaded with 16+1 rounds, it may seem heavy, but it balances itself out very nicely.

As to carry, it’s comfortable to open carry. The provided holster fits nicely on the hip without digging into you, safely covers the trigger, and draws nicely. Grasping the frame of the pistol and pushing briskly with the thumb on the holster releases it nicely. Lastly, the XD(M) has no sharp edges, so there is minimal worry of snags. 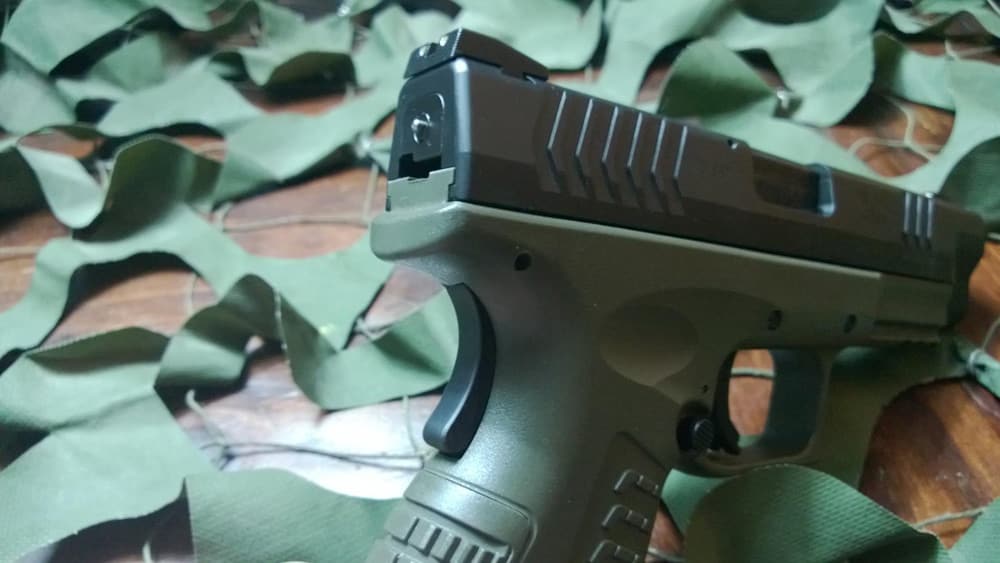 The Springfield XD(M) has a striker status indicator. It protrudes out of the slide, right below the rear sight. It physically and visually indicates the pistol is cocked. (Photo by Shawn Smith)

The sights are well suited for target shooting, making sight alignment quick, and creating a very clear and precise sight picture. At 25 yards I was easily able to shoot between 3/4- and 1.5-inch groups center mass, though it is with calm slow fire. Quick double tap or follow up shots were within 3-inch groups at 25 yards. It is easy to get used to.

While I never questioned how well a polymer pistol would perform, I just didn’t offer the experience I expected. However, that taste can be acquired so let me get into more about how I saw the light.

Shine the light on me 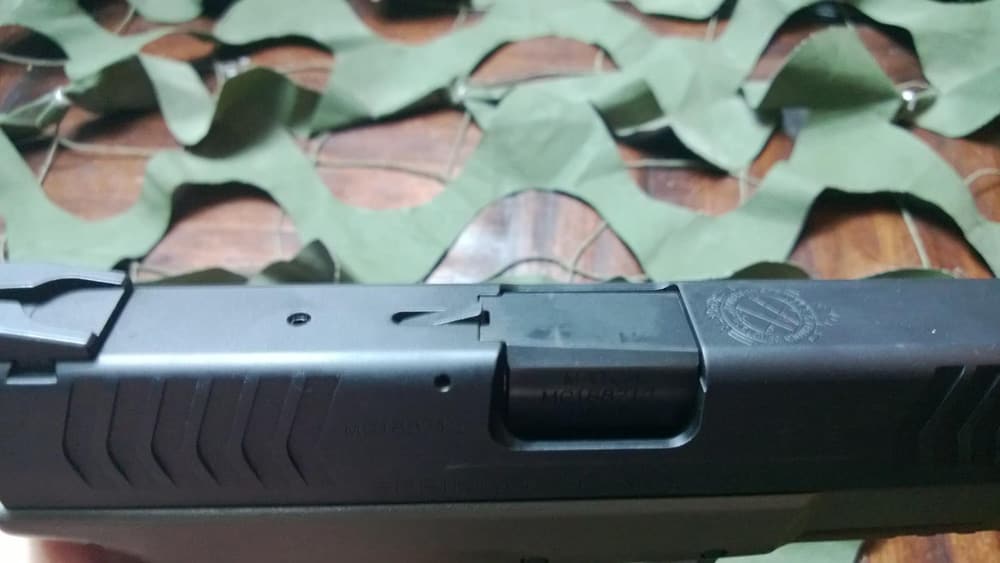 The loaded chamber indicator signals to the user when a round is loaded into the chamber. (Photo by Shawn Smith)

One of my basic requirements for a good carry pistol is that it can be quickly and easily field stripped. The XD(M) can easily be disassembled, reassembled and function checked in under a minute.

To disassemble the XD(M), the grip safety must be depressed, lock the slide open, flip the disassembly lever, and while holding the slide release and the slide lock, remove the slide from the frame.

The predecessor XD model required that the trigger be depressed as well to release the slide.

Also, the XD(M) features both a loaded chamber indicator and a striker status indicator, making it easy to ascertain the condition by sight and by feel, even in the dark. Knowing how to read the condition of a pistol is important to me. While is also featured on an XD, I prefer the XD(M) package.

All in all I found the XD(M) very appealing and fulfilling of my requirements, to the point of being the absolute best handgun I have ever had the privilege of owning. This is saying something for a guy who previously found no merit in a polymer-framed pistol.

It can be hard to remain objective when reviewing things you like, but fact is, there is nothing about this weapon that I do not like. I have managed to sell this point to several friends who are all now proud owners and avid lovers of the Springfield XD(M). My wife now even has her own, a stainless steel and black bi-tone 3.8-inch 9mm XD(M), and she may love it more than me.