The comparison game is always fun to play, but I prefer to keep things fair.  It’s just not right to pair a Colt Mustang with a Ruger LCP.

The differences amount to matters of opinion.  The Mustang is a substantial work of art and single action.  The LCP is as thin as a coked-up super model, and feels almost as fragile (a deceptive feeling).  But it goes everywhere.

A better comparison would be the LCP and the P3AT.  Or Ruger’s LC9 and Beretta’s Nano.

I would not seriously entertain a comparison between a Ruger LC9 and a Ruger LC380, which are exactly the same size.  The 9mm smokes the .380 ACP.  Maybe, if your wrists were really a concern, you might consider the .380.  Or for political reasons, perhaps.  The LC9 makes the LC380 appear way over-sized.

That’s not the case with the XDS 9 and XDS 45.  These two push the limits of compact design.

Why did Springfield Armory launch the XDS in .45 ACP a year before they launched the The XDS 9?  The .45 was groundbreaking.  It is a great proof-of-concept.  If they could engineer a pistol that size that could effectively handle the pressures of the .45 ACP, it would be easy to convert the platform to 9mm.  And the .40 S&W isn’t far behind.  This was always the plan, I think, as they stamp all of their XDS holsters 45, 40, 9. 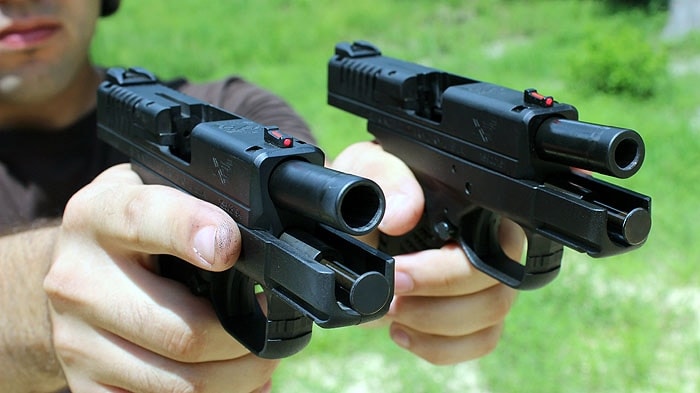 So with all three calibers (assuming the .40 isn’t far behind the 9), which would you choose?

The XDS 45’s flush fit magazine holds five rounds.  With one in the gun, that’s on par with the average revolver.  The XDS 9 holds seven in the magazine.  Two more rounds. 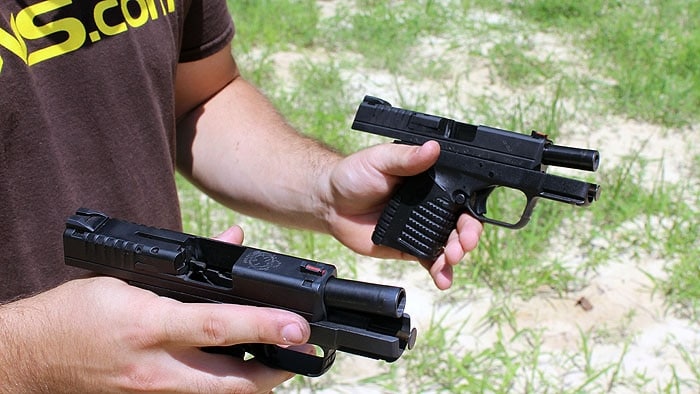 Which is which? I can never tell.

I have shot both guns side-by-side and didn’t see much of a practical difference.  The 9mm kicks less.  Though that might have more to with the grain weight and powder loads of the ammunition I was shooting.

But I will offer this.  The XDS 45’s kick is snappy.  With a two handed grip, it is manageable.  I see less kick and faster follow-up shots with the XDS 9.  Though it still kicks much more than a full-sized 9mm, the recoil is easier to manage.

If you watch the video above, Jacob has the XDS 9 in his left hand and the XDS 45 in his right.  He says he can’t detect that much difference, but the 9 doesn’t climb as high as the 45 (which is also in his dominant hand).

But what about the ammunition?

I think this is where the debate will leave the rails.  Die hard fans of the .45 ACP will trumpet the terminal ballistics of the big fat bullets.  Fans of the 9mm cite the increased speed.  The .45 is slow.  The 9mm is prone to over-penetrate, which wastes ballistic energy.

Let’s make a mathmatical comparison.  Whenever I need good numbers, I turn to Ballistics by the Inch.  They are unbiased and do solid research.  Their testing methodology is easy to understand.  They make barrels for each caliber, and cut them down, inch by inch, testing the resulting loss of muzzle velocity as the barrels get shorter.

Here are two results from their tests of three inch barrels:

But muzzle velocity is just an indicator of a more complicated equation.  Kinetic energy is a more accurate judge of what will happen when a bullet hits its target.

This is interesting, but all too academic

In the end, it doesn’t seem to matter much.  .45 or 9mm, both are kick ass self defense rounds.  With well designed bullets in effective, reliable ammunition, both guns are going to perform admirably.  What matters is that you carry, not which one you carry.