In my quest as a law enforcement officer to find the ideal backup gun, I came across an obscure and largely unknown pistol, the Star Firestar M45. I didn’t think much of the little .45-caliber handgun in the display case as it was from an obscure foreign manufacturer, but the dealer convinced me to at least hold it and get the feel for it.

So, being open to suggestion, I obliged him and gave it a try. It was heavy for a supposedly more compact semi-auto, but it felt so very good in my hand. On a whim, I purchased the Firestar—and it turns out to be one of my better impulse-buys ever. 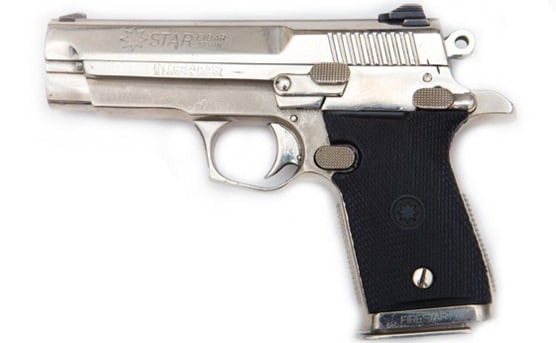 Many can see that the Firestar was designed after the 1911. It is hammer fired with a single-action only trigger and features a manual safety, an all steel construction with a blued or starvel finish, three-dot sights, and the trigger breaks at a 4.5 pounds. The major external difference to a 1911 is, due to its compact design, the Firestar lacks a grip safety.

The gun has an overall length of 6.7 inches, a 3.8-inch barrel, and weighs in at about 36 ounces with a full seven-round single-stack magazine inserted.

To carry it, I found a small-of-the-back style holster for it. Although it was extremely heavy for a concealed carry gun and would easily drag down unbelted shorts or slacks, it rode in the small of my back or attached under my arm to my ballistic vest, with great ease and comfort.

I was somewhat uncomfortable with its weight at first, but then I fired it. Being a .45 small semi auto, I expected the recoil to be significant, and it was noticeable, but the weight of the gun kept the recoil from being uncontrollable and is actually a very stable shooting platform.

The Firestar .45 turned out to be very accurate at closer ranges and very reliable. It is closely competitive in my catalog of favorite .45s to the Glock 21 and the Colt 1911.

The Firestar is actually a series of guns with other models chambered for 9mm and .40 S&W, but all of them have a good reputation. In fact, the 9mm and .40 have an edge on the M45 model because their components are interchangeable. The M45 is slightly bigger.

For these guns today, having compatible parts is advantageous because during the early ’90s Star fell into economic troubles due to hard times for the defense industry, according to Star-Firearms.com, a website that covers Star entirely. Production of the Firestar series stopped in 1994 and the company filed for bankruptcy and closed its doors in ’97.

Also, when the company closed, after 90 years, many components such as barrels and frames were destroyed, so it can be difficult to find replacement parts. Nowadays, if you find a Firestar pistol it’s more than likely used.

(On a side note, Star firearms were imported from Spain by Interarms, a now defunct company.)

Too many shooters out there regret selling off their Firestar. If you have one, don’t sell it, but if you find one and it’s in good condition, buy it. Price will vary, of course, but you’d be looking to pay around $300 to $500.