The Stevens Maynard Jr .22 Rifle: For a Childhood of an Earlier Generation

The Stevens Maynard Jr .22 rifle was part of another generation. Before videos games or go-karts. When young boys, for fun, grabbed their rifle, wandered through the woods and shot cans or killed squirrels. Though it was a tedious design to use, a lever action single shot, it was relatively safe to use. Today, kids, grown ups, and maybe even shooters can only imagine what that was like.

My father grew up in Atlanta in the 40s.  The house he lived in was razed to build more of Georgia Tech’s campus.  While he wasn’t downtown, he was definitely in town.  And he wandered the woods (there were still woods in the city then) with a Marlin .22 LR the size of an M1 Garand.

I’m not going to get all nostalgic for something I didn’t experience.  I wasn’t allowed to have a bb gun.  And I don’t think it was a great idea for my father to carry a rifle either.  One of his favorite targets was live shotgun shells, which he couldn’t hit unless he was close.  Long story short, he carried birdshot in his shins as a badge of his relative stupidity.  But I digress.

What I meant to say is there was a time when the .22 LR was both a utilitarian tool and a work of art.  And they were unabashedly built for boys.

And what better example than a Stevens Maynard Jr in .22 LR. 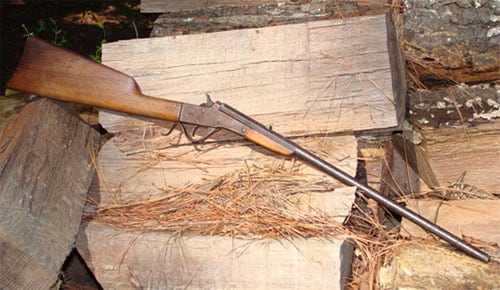 Stevens Arms introduced the .22 LR to the world.  From the end of the Civil War until the middle of the 20th century, Stevens Arms was a major presence in the American market.

The Maynard name in the title comes from Edward Maynard, a 19th century firearms pioneer whose designs were found in the hands of Confederate soldiers during the Civil War.

Maynard developed numerous cartridges and a lever action breech loader that would be the inspiration for Stevens Maynard guns and, later, the Steven Arms No. 15 Crackshot Rifles.

During that era it was advanced technology. The lever that unlocks the barrel doubles as a trigger guard. Historians, like FloridaReenactorsOnline.com, say soldiers trained with the rifle could load and shoot up to 12 rounds a minute.

The Maynard pattern is recognizable by the rakish angle of the stock.  The Maynard rifles push shooters a bit more upright, as you have to be standing straight to both shoulder the weapon and align the sights.  The angle seems extreme to modern shooters used to using their stocks for solid cheek-welds. 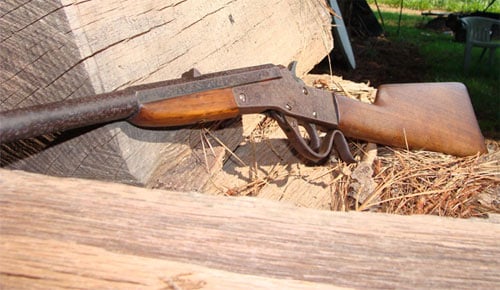 The construction of the Steven Maynard Jr began most economically in 1900.  The shoulder stock was cut from a narrow board.  The edges were rounded over, but the sides of the stock were left flat.  Later in the production run, somewhere around 1906, radiused stocks were available.

The 18-inch part-octagonal barrel is stout. A portion of the steel near the breech is octagonal. The rest of the heavy barrel is round.

How much is one of these worth today?

I have no idea what a new Stevens Maynard Jr would cost if they were still being produced.  Probably $200, $300?—somewhere in there.  Maybe a bit less. This is what a new Stevens Favorite goes for (they’re made by Savage, who owns the Stevens brand).

A good Stevens can be valuable as a collector’s piece.  They are, after all, vintage Americana. 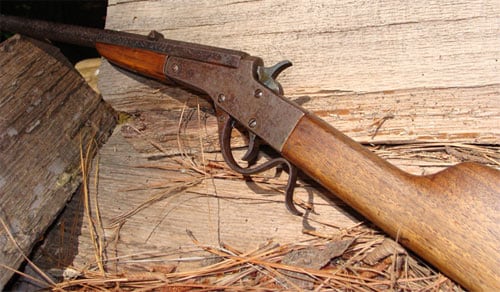 While these guns can be incredibly accurate and fun to shoot, they’re antiques.  They aren’t shooters.  Not that they’re inherently dangerous.  The opposite.  Even though they were inexpensive, they weren’t cheap.  All of Stevens’ rifles were stout.  But the single shot, for one thing, gets tiresome.  And any wear on an antique detracts from its value.

The Stevens Maynard Junior isn’t a gun as much as it is a reminder of a time when boys ran wild—a reminder that not so long ago, in a time before Airsoft and Xbox, the world was a very different place.