There’s just something about a well-designed bolt-action rifle that I really like. And the Steyr Scout in .308 Winchester is one of the best I have ever shot. Many would consider the Scout, brainchild of both Jeff Cooper and Steyr, a hunting and fighting gun because of its size and caliber. However, it has some really interesting and innovative features that I think make it much more than just an all-purpose gun, it’s really more of an investment.

The idea for the Scout is generally credited to the legendary gun writer and shooter Jeff Cooper, who wanted a fairly small, fairly lightweight bolt-action rifle in a caliber sufficient for hunting almost any game or use for fighting at ranges of about 400 yards. Cooper actually worked with Steyr to refine his concept and the result was the Steyr Scout. 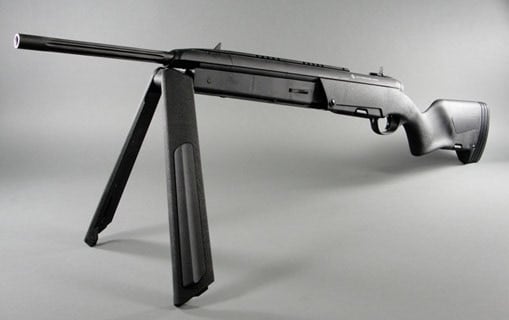 There are now several versions of the Steyr Scout available and they vary by stock design. The stock is synthetic and comes in black, gray, timber, camo or black with wood inserts. Also in 2010 there was a limited edition Jeff Cooper model available. Aside from a few aesthetic tweaks and more accommodating features on the limited edition, they’re all similar in performance.

Pricey? Yes. But with that you get a very complete rifle—something very well-designed and well-made.

The Steyr Scout was designed to be carried indefinitely across rugged terrain and to perform reliably in any situation. Its size and some specific features help the gun and the user adapt to those situations. 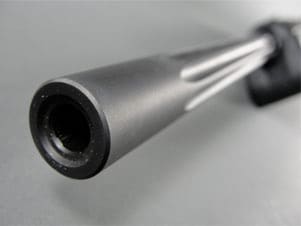 Starting off, it has a short 19-inch fluted barrel putting its overall length at less than 39 inches and weight at about 6.5 pounds unloaded. The rifle I tested had a factory mounted 2.5x Leupold scope.

Probably the coolest feature on the gun is the built-in bipod. The two wings of the bipod come down quickly with the push of a button, unfolding from the front of the stock. This offers the flexibility of using the bipod either for shooting, or just for setting the gun down. When not in use, the wings fold back in place and you can’t tell that they’re not just the sides of the stock.

The standard magazine holds five rounds, however, 10-round extended magazines are also available. But that’s not what’s interesting about the magazines, no it’s the fact that the rifle has two loading settings. The first will allow shooters to manually load a single round into the chamber but still keep the magazine secure in the gun. The second setting completely seats the magazine and allows rounds to be chambered from it and cycle like a bolt-action would.

Another thoughtful design feature is that a second magazine can be secured inside the butt of the synthetic stock. This makes it easy to carry and helps to balance the light rifle.

Lastly, it has a rubber buttpad to help absorb recoil and the gun can be adjusted both for length of pull as well as trigger pull.

The bolt has that “smooth as butter” feeling that the best guns offer. And it locks in place securely with a simple but intelligent tang safety, so it’s within reach of a shooter’s thumb (The tang safety is a common and popular feature found on hunting guns made by companies like Browning and Mossberg). 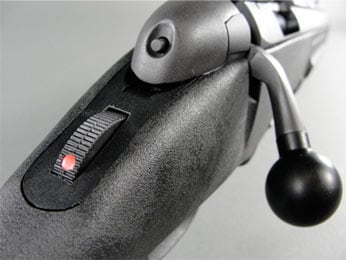 The Scout trigger is light, smooth and crisp. Not too light—it won’t go off with just a touch, but you’re not going to shift off a target by squeezing the trigger, either.

When I shot the Steyer Scout it was my first time to use a scope set so far down the length of the gun. There are mounting rails placed just beyond the action. But I liked it a lot—it allowed for very quick target acquisition in the sort of dynamic environment the gun is designed for.

The reticles (crosshairs) of the Leupold scope that came with the gun are pretty heavy, meaning that they completely covered the small oval target I was shooting at at 100 yards away, so it wouldn’t be a problem at all for hunting. I found it easy to keep a three-inch group at that distance—I’m sure the gun would do even better in the hands of someone who is a better shot. But this is not a target rifle.

The fit and finish were excellent. I’m not a big fan of synthetic stocks, but the ones Steyr uses are quite good, and don’t make me pine for wood. The magazines all loaded smoothly and were easy to seat and secure in the gun.

The ergonomics of the gun were fine for me. It was comfortable to hold, comfortable to shoot and easy to use in every regard. Running a dozen rounds through it was fine. Same with recoil—not bad at all.

At about $2000, the Steyr Scout is not an inexpensive gun, but I think that it is worth the money because of the intelligence of the design as well as the quality of production. Certainly, this is the kind of gun that would serve for a lifetime and retain its value. Hmm…