I’m going to admit something to you.  I like to play with guns.  It’s a fact.  I wish that I could tell you that I always approach a weapon by first striking an inquisitive pose, scratching my chin in a thoughtful way and assessing its practical potential.  But that would be a lie.  When I opened up the Stoeger Double Defense at the counter of Rebel Sporting Goods in Keysville, Virginia, I was immediately transported to my 1980’s post-apocalyptic cinematic imagination.

Think Mad Max.  Think Randall “Tex” Smalls as Leonard Smalls in Raising Arizona.  That’s the spirit that the Double Defense invokes in me.  And it is a bit paradoxical, as it has everything to do with offense.

The answer here is simple.  It is a Stoeger Coach Gun painted black.  What looks like polymer is just wood and flat black paint.  The barrels are even stamped “Coach Gun.”  The barrels are 18.5 inches, so street legal.  And unlike the Hollywood coach guns, the Double Defense has a stock.  The basic set up is available in the classic wild west side-by-side, or the more-sporty over under. 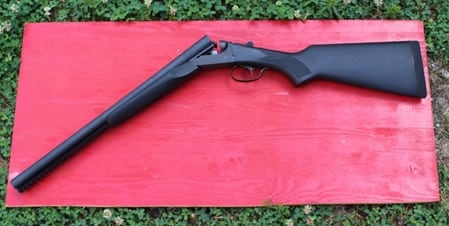 The barrels are ported near the muzzle, which should help with the muzzle rise.  But a 12 gauge is going to jump, especially one with a short barrel.  And kick.

The sights are good—the typical brass bead has been replaced with a green fiber optic.  And there are rails, one above and one below, which allows for any number of options.

It feels like a solid hunk of gun.  The wood and steel are just that and slightly oversized.  The stock has a rather square shape where many other companies round off corners.  This is common to Stoeger.  I picked up a really nice .410 side-by-side on display at the same shop and it had the same shape to the stock (though the finish was much nicer).

The Double Defense comes disassembled, and packed in Styrofoam, cardboard and some rust inhibitors.  It has a surplus feel and smell to it that I like.

Out of the box, the Stoeger is stiff.  It is a beast of a gun and you’ll be reminded of this constantly, even when putting it together.  The tolerances are really tight and when pieces fit together, they snap into place with a pleasing slap.

There is nothing to recommend about the finish.  The flat black on flat black is about as utilitarian as it comes.  But anything more would really be a bit ridiculous.

It shoots.  There is nothing unusual about how it shoots.  This, I think, is one of the hardest parts of a short barreled shotgun review.  Smoothbore guns with no choke do what they do.  With a side-by-side, the center blade is off center (left or right) of the selected barrel.  This requires a bit of compensation, but it is a scattergun….

There are three peculiarities I’d like to point out endemic to this and other side-by-sides.

For starters, the Double Defense has only one trigger.  Pull it, let it reset and then pull it again.  The right barrel goes, then the left—most of the time.  Because Stoeger is building one of the most simple coach guns, the trigger is not staged (that would be silly on a defensive gun).   They could have used two triggers, but that might have been a bit much, too.

Second, the action is really stiff.  I’ve shot some side-by-sides that break easily and eject both shells in the process.  Not this one.  I found that breaking it over my knee was the best way to get it open.  Even with such a forceful opening, the shells had to be pulled from the chambers.  We shot hundreds of rounds through it and greased it up—no change.  Stiff.

The third gets me every time.  When you break open the barrels, the safety is reset.  I always forget this.  It is funny when I’m goofing off and trying to shoot clays with the Double Defense.  It would be potentially deadly in a defensive situation.

But let’s be real

This is a great gun.  It is fun.  It could be used for defense, but really, there are an many better options.  For starters, two shots may not be enough.  If you, like me, are subject to poor decision making when awash with adrenaline, then two shots will likely leave you trying to get the gun open, get the shells out, get two more shells in…  And, if you’re still kicking, remember the safety, or you’re dead.

I don’t think that the Double Defense can consciously be recommended for home defense.  I’d love to strap in on my back and ride a Harley through the Nevada deserts and take pot shots at some jack rabbits, but I’d never pick up this gun in the dark and trust my life (or the lives of my family) to it.

Maybe it should be called the Double Fun Gun? 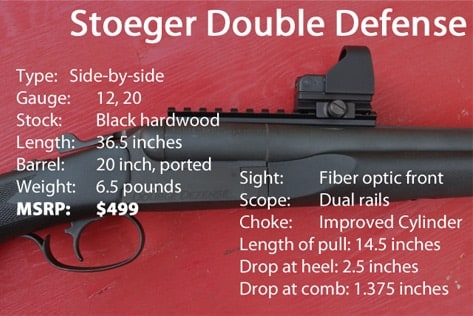 Because it is a lot of fun.  And the one I received to test will, randomly, fire both barrels at the same time.  With 3-inch brass, this is a bit of a kick.  It also sends out a no-so-fun mystery cloud of lead or steel, as there is an almost imperceptible lag between the discharges of the barrels.  The first will be on target and the second will fire as the gun is rising up.

But other than that, it is fun.  The day I did my evaluation, I tested gear from lots of companies.  I had optics and lights from Eotech and Aimpoint.  The Eotech WL1-AA light is a great addition to the Defense side of the Double defense—it has a light and a laser.  But the optics seemed to be overkill.  Maybe on an over-under.  But the flat black mass of a side-by-side aims itself.

I also had a Blackhawk shotgun bandolier that holds 54 shells, which made walking with the Double Defense a breeze.  After a short while, I had developed this two finger technique for unloading and loading that was surprisingly easy and fluid.

In the end, I want one of these.  For the money, it is easily worth it—even if it the marketing strategy of Stoeger seems to miss the mark.