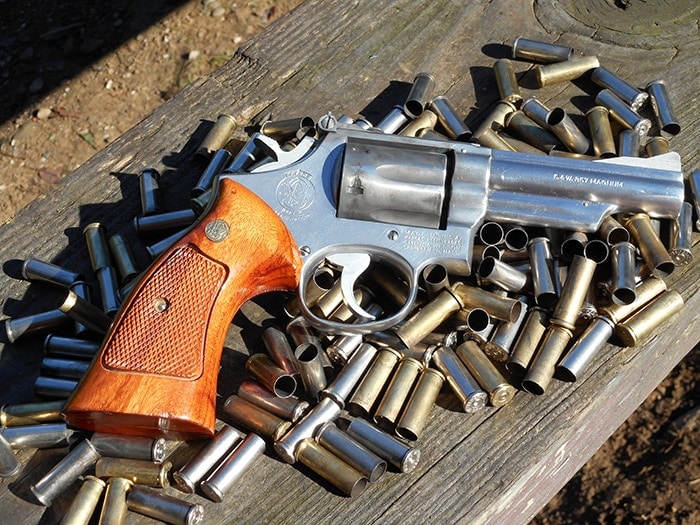 Yes, it might seem incredulous for a youngin’ like myself who has grown up in the age of polymer framed Wonder-9’s to claim a double-action revolver to be near perfect. But I can and I do. I appreciate the beauty of most well crafted revolvers. Like a fine piece of artwork; it takes a thoughtful mind to appreciate the nuances of an old wheel gun. The Model 66 appeals to me both mechanically and aesthetically; a piece of timeless beauty in a modern age.

Once upon a time there lived a man named Bill Jordan. Mr. Jordan was a retired Marine and Border Patrol officer who also wrote firearms articles. A contemporary of legends such as Elmer Keith and Skeeter Skelton, he wrote articles on every aspect of firearms. He also wrote several books including: No Second Place Winner, Tales of the Rio Grande, and Mostly Huntin’. Jordan was also instrumental in the creation of the S&W Model 19, which begat the Model 66..

Jordan had gained a lot of experience as a Border Patrol officer crossing large stretches of open land, many of it on foot. When he retired, he retired from a high level position as an Assistant Chief Inspector. He preferred large caliber revolvers for their hitting power, but felt they were too heavy. Jordan knew that many officers had the same preferences and went to S&W to convince them into making a K-Frame .357 Magnum revolver. Calling it the “Peace Officer’s Dream”; it called for a heavy 4.25 inch barrel and adjustable sights.

Jordan’s desire was for a revolver light enough to be carried without being uncomfortable. It also had to be able to make accurate shots at longer ranges and he wanted it chambered in .357 Magnum, which could stop virtually any predator in North America; be they two or four legged. He reasoned that the K-Frame would save on weight, and be durable enough to withstand the .357 Magnum cartridge. Bill Jordan got his wish, and in 1955, Smith & Wesson presented him with the first of a new breed; the Model 19 revolver. In 1970, S&W would listen to the wishes of many shooters and release an all stainless version dubbed the Model 66.

History aside, Bill Jordan and the Model 66 did get many details right. It’s stainless finish helps to fight corrosion better than standard bluing. The weight is 36 ounces; comparing favorably with larger framed S&W revolvers and some autoloaders of the time such as the 1911. The ejector rod is shrouded, and the underlug extends for 3/4 of the barrel for added durability. The grips are large factory target grips with the old style “football” cutout.

They’re checkered and feature inlaid S&W medallions for an extra touch of class. The backstrap is serrated, and the hammer has a wide spur with sharp checkering. The rear sight is click adjustable for both elevation and windage. Early models will have an all stainless rear sight, from 1975 onwards the rear sights were stainless with a black finish. This pistol was built in 1974, and features an all stainless sight. The front sight is a Baughman “Quick-Draw” front sight. Although the Baughman sight was standard, you might see the occasional model with a special order Partridge target sight.

While it may seem odd that many experienced shooters would recommend an older revolver to newer shooters, there are several good reasons to do so. Well maintained revolvers are often in excellent shape mechanically, and only need the most basic of routine maintenance. They are simple to operate and only take a short period of time for a new shooter to become familiar with it’s manual of arms. Also, .38 Special ammo is plentiful, and while not cheap, it is not prohibitively expensive. 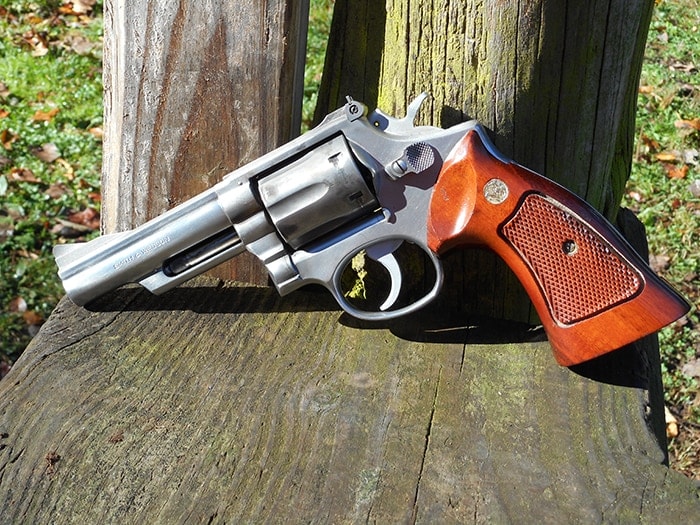 This SW Model 66 was bought for $500 before tax and transfer fees. (Photo: Francis Borek)

However many of those new shooters will also be competing with long time collectors for more desirable pre-lock S&W revolvers. A contentious addition to the S&W revolver design; the lock has alienated many long time shooters. Those who pick up a pre-lock revolver will benefit from (theoretically) greater reliability, and a greater return on their investment should they decide to sell a pre-lock Model 66. Trust me: there are a lot of people who want pre-lock Model 66’s and those people will not hesitate to pay a premium for them.

MSRP for the current Model 66 is $849. Used examples can often be found for $400 and up, depending on age, condition, and accessories such as the grips, box, and paperwork. This one was purchased for $500 before tax and transfer fees.

The trigger is a typical old S&W revolver trigger. In double action, it is very heavy, yet smooth with no grit. Thumb the hammer back into single action and now you have a hair trigger so light; you can breath on it and it’ll fire. Chambered in the potent .357 Magnum means you can also practice and plink with the tamer .38 Special. The very heavy double action trigger should help newer shooters train and acclimate to heavy DA triggers also present on autoloaders. Cocking the hammer for single action brings along the possibility of legal implications should the gun be used in self defense. It also takes much longer to adjust your hands and sight picture when you cock the hammer. If practicing for self defense; practice in double action.

The benefit of being chambered in .38 Special helps your wrists and wallet when practicing, as .38 Special recoils and costs less than .357 Magnum. If you feel that even for a self defense situation you won’t be able to handle .357 Magnum loads, there is a large selection of excellent .38+P defensive loads on the market today. .38+P out of the Model 66 feels no worse than a 9mm through a full sized handgun. Both the .38 Special and .357 Magnum are inherently accurate cartridges, fired by an accurate revolver which builds confidence for all shooters.

The Model 66 draws its lineage from the turn of the century. The lockwork is almost identical to that of the Military & Police Model of 1905. Since then, autoloading pistols have established their dominance in the shooting world. Now polymer framed pistols make old favorites such as the 1911 and CZ-75 look like dinosaurs.

While there are those who speak of their Colts or Rugers; for many others the nearly perfect handgun will always be the S&W Model 66. As I was once told: “It’s an old Smith & Wesson, you know nothing is wrong with it”. No truer statement has ever been uttered in my opinion.