Gun Review: The Taurus 605 in one word? Modest

Snub-nosed revolvers have a large and devoted following. With their simplicity of operation and ease of concealability, they’re a good option for carry, nightstand duty, or to tuck in a vehicle’s console.

They’re also convenient for traveling in less gun friendly states, where cartridge-tallying politicians might not look kindly on a standard capacity semi-auto such as a Glock. For those who want a snubbie, the budget-friendly Taurus 605 in stainless steel is worth a look.

The 605 has been considered one of Taurus’s better offerings for many years, and the reasons are plain. First of all, you get Smith & Wesson J-frame looks without Smith’s price tag. If you’re a snubbie aficionado, you probably consider the Smith — the gold standard. But if you’re broke, the Taurus’s similar styling is a definite draw. Simply put, the Taurus is a cheap date. I picked mine up for $435, but you can probably do better with a little hunting around.

When not holstered, the Taurus 605 rests comfortable on the kitchen table — temporarily, of course. (Photo by J.P. Anderson)

Enough about looks though, how does the Taurus 605 shoot? I cleaned it up (you don’t want to shoot a Taurus straight out of the box. Their gobs of yellow packing goop is legendary), took a box of PMC .357 and a box of Federal .38 Special to the local gravel pit, and put the diminutive revolver through its paces. I started with the .357. After a few cylinders, my hand was so abused I could barely hold the Taurus 605’s minuscule grip. I decided to leave 10 rounds in the box while my hand was still useful enough to operate my car.

That’s the first thing most people learn about these J-frame sized snubbies: shooting a lot of .357 out of them sucks hard. At 24 ounces some would consider the 605 on the heavy side for carry. Compared to a revolver like the Ruger LCR the Taurus in stainless is a cinderblock. But I don’t carry “talisman” guns. I like to shoot them. And the recoil absorbing extra weight was well appreciated. 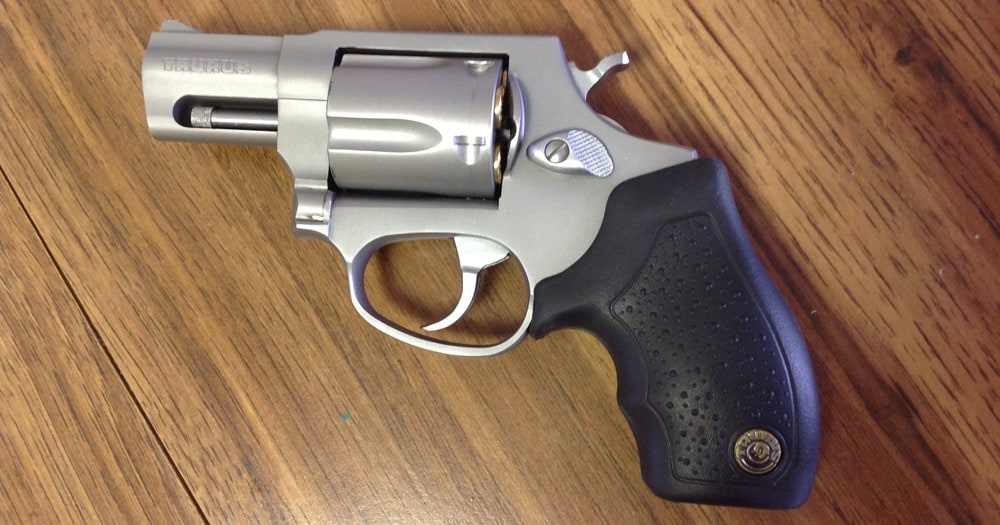 I resolved to return in a few days and try the .38s. When I did, sweet relief! The revolver was easy to control, and I blazed through the whole box of ammo without a hitch. My hope is to practice with a few cylinders of .357 to begin each session, as that’s what I’ll be carrying in it, then switch to the .38 for the remainder of my drills so that my hand doesn’t feel like it was hit with a shovel.

How did the Taurus perform? The trigger is smooth and breaks cleanly, and can be staged in double action, if that’s your preference. The single action pull is light and crisp as an autumn breeze. With a little practice, it was easy to put bullets on target at self-defense range in either DA or SA, despite the short sight radius.

Speaking of sights, the 605 has a Plain Jane serrated ramp front site. The rear sight is a simple machined groove, typical of this type of firearm. This low profile setup makes for a cleaner draw in a self-defense situation, but can be a challenge to aim with. I may use a dab of sight paint to enhance mine. Or practice my point shooting skills and forget it has sights altogether.

Though I love the factory two-finger rubber grips for their recoil absorption and concealability, they may be a bit small for those with large hands. Taurus and other companies offer after-market alternatives in various sizes, shapes and materials. Be sure your aftermarket grips won’t interfere with a speed loader, if you use one.

The 605 comes with a hammer-mounted key lock and two keys. I’ll most likely never use this, but I suppose it’s a nice option. I highly doubt it’ll ever cause any kind of malfunctions and it’s there if I want it. 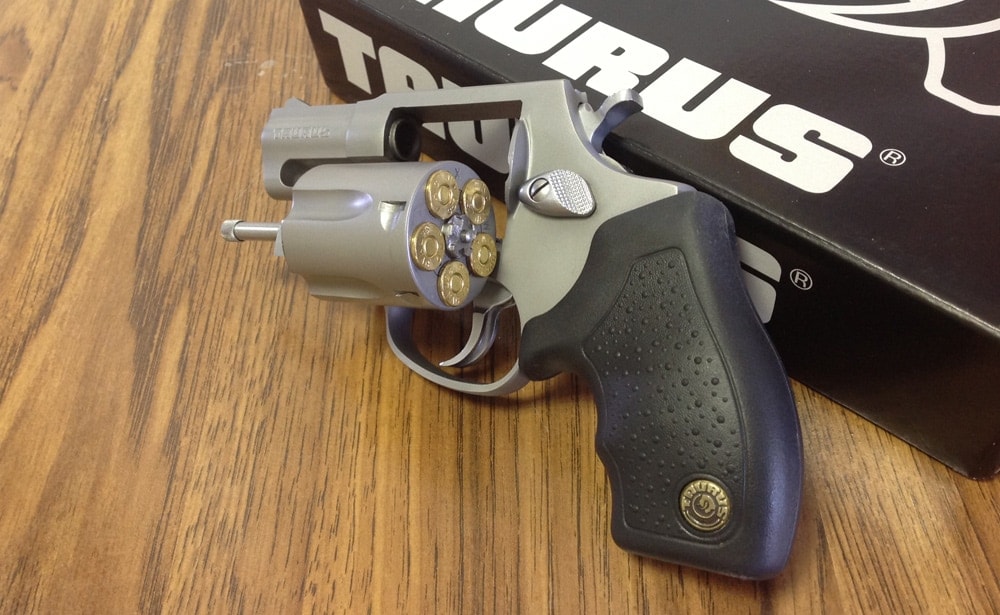 The Taurus 605 exposes itself for us. (Photo by J.P. Anderson)

Some shooters are leery of Taurus, citing a high incidence of quality control problems. I’ve shot several of these 605s without trouble, however. The timing and alignment is all in order, the cylinder locks up tight, and it’s accurate. Should I encounter an issue down the road, Taurus offers a lifetime-of-the-gun warranty (though hopefully I’ll never need to take advantage of it). And to be fair, revolvers can malfunction during normal use just as semi-autos can, despite what some people believe.

With only a five round capacity, some may feel a small-framed snubbie is inadequate. But the .357 is a proven defensive round, even if it does lose some oomph from the short barrel of a snubbie. I feel very well armed with the Taurus 605.