Taurus Model 992 Revolver Review: A Full 10 When it Comes to Awesome

When it comes to revolvers people generally know what they’ll get. I hate to use the clichéd expression, but a revolver really is a tried and true handgun design. But how does one make it better? Well, for starters make it a .22 and give it some incentive like an extra cylinder for a more powerful round.

Something Taurus figured out with the Taurus 992 Tracker.

Taurus Model 992: A Tracker of sorts

I have a soft spot for .22 revolvers. There’s just something really cool about having a plinking gun you don’t have to carry on your shoulder. I have a .22 conversion for my 1911 .45, but it can’t touch a full-time .22 revolver when it comes to general awesomeness.

The Taurus Model 992 has a cool factor of ten and not just because it’s well built. Its cool factor stems from the fact that it’s actually two revolvers in one. The Model 992 comes with two cylinders, one for regular .22 LR loads and the other for .22 Winchester Magnum loads (tell me that isn’t cool).

Although you could use the Taurus 992 for plinking, its original purpose is for hunting. It is part of the Taurus Tracker series of revolvers and while the others, like the .357 and .44 Magnum models, are intended for hunting larger game, the .22 model would is aptly suited for hunting varmint.

The 992 can be operated in double or single-action. The single-action trigger pull is right around three pounds, four ounces. It’s very crisp. The double is very smooth as well.

The front sight holds a nice red insert that works well with the gun and the rear is fully adjustable.

Lastly, the Taurus 992 is offered with a 6.5-inch barrel, but a four-inch barrel is available too. The 992 weighs in at a very solid 44 ounces, so it’s definitely not light but, at the same time, any recoil from those Magnum loads will be eaten easily.

What makes it so special?

Stop me if you’ve heard this one, but revolvers are generally known to be reliable guns with a sturdy construction and a trigger that’s easy to intuit. Well, the Taurus 992 meets those minimum standards, but also has a brilliant marketing twist. 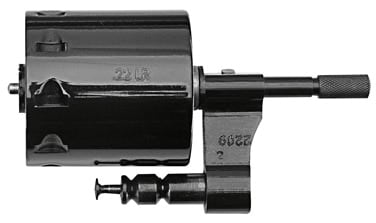 As mentioned, the 992 comes with two interchangeable cylinders. One is chambered in regular .22 LR and the other holds magnum loads, and it’s very simple to swap out. For both cartridges, the cylinder holds nine rounds, which, when you think about it, is just one-round less than most of the popular rifles in .22.

Once the cylinder is extended out, there’s a button one must depress and the cylinder comes right off. To put the second cylinder on, all that has to be done is slide it on and it’s ready to go. The word neat comes to mind. It is very simple.

The grips are something that really stands out, too. Remember the mushroom grips with the individual rubber ribs that some kids hand on their BMX bikes? It’s the kind that sort of conformed to your hand. Well, Taurus actually takes that technology and puts it on their revolvers. I never would have considered that style grip on a gun, but they seem to work.

The formal name is “Taurus Ribber Grips”, which is an abridged way of saying “ribbed rubber”. And they’re soft and comfortable enough to maintain a positive grip.

Just how much difference can a magnum .22 make over a regular .22, though? You may be surprised.

The magnum loads don’t make for a hand-cannon, but they are a hell of a lot more powerful than a run-of-the-mill .22 bullet. The muzzle energy when using Magnums is doubled over a .22 LR and the feet-per-second they travel is increased more than noticeably.

A regular .22 LR load will leave the barrel at right around 900 to 1,000 fps, and with the muzzle energy of about 90 foot-pounds, give or take. A magnum load, however, can slingshot out at over 1,500 fps (rumor has it that the Winchester Varmint HV polymer tips travel at almost 1,700 fps) and deliver a whopping 190 foot-pounds of energy. That difference is more than negligible. The .22 Magnum is a git ‘er done round.

With the heavy frame and 6.5-inch barrel, the 992 Tracker is very easy to manage for both .22 LR and .22 WMR. Neither one will come close to rattling your bones when it comes to recoil. And as far as accuracy is concerned, decent enough shooters will be able to manage around one-inch groups at 25 yards no problem.

Taurus has placed an MSRP of just $499 on this beauty. I think the price is more than fair considering the extra cylinder and apparent quality that has gone into making the pistol. The shape of it is reminiscent to a Ruger GP100, to this author’s eye, which is a timeless design that will make just about any shooter happy.