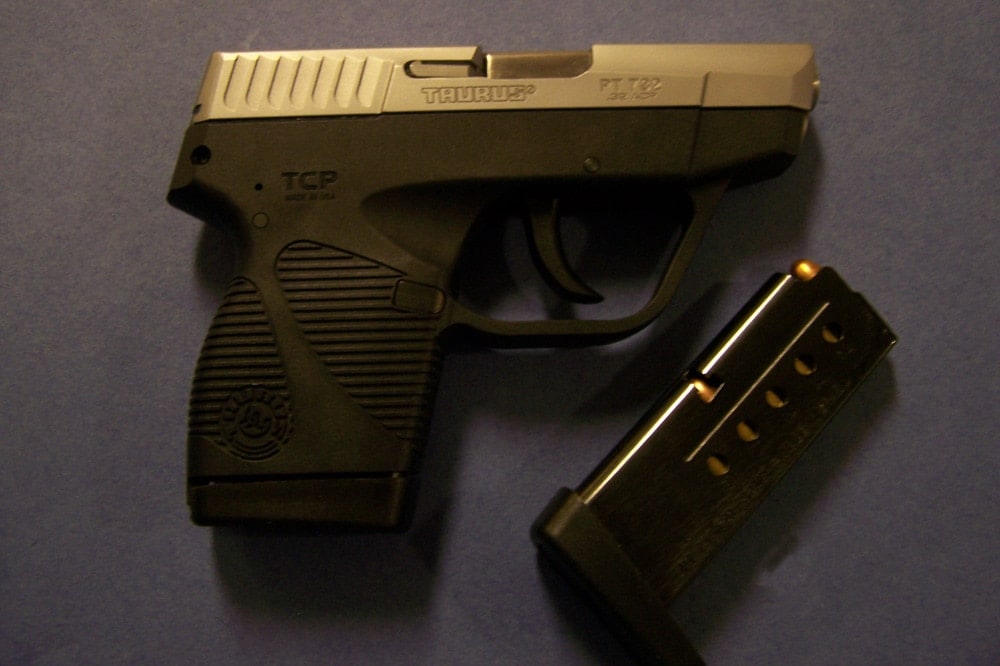 Before my I obtained my Kentucky State Conceal Carry Deadly Weapons license, I casually researched and shopped for the right carry gun over a six-month period. I scoured the Internet for a medium to high quality carry pistol, one that packed a good punch and shot with good accuracy. One that could be easily concealed anywhere on my body. Ultimately I chose the Taurus PT 732 TCP.

I know there are other similar small carry pistols out there, but in my view the Taurus PT 732 pistol is a one of kind. With this great little pistol you get the feel, style and quality of a larger more expensive handgun for less than $300 and that was just where I wanted to be on price.

Mostly the PT 732 gains positive reviews, like this one, but there has been a complaint here and there, like with most guns. Fortunately, Taurus has a lifetime unlimited manufacturer’s warranty, which also mostly gets favorable reviews.

Although it’s no longer listed in Taurus’s catalog, the PT 732 has its roots in the Taurus Compact Pistol line, which consists of basically the Taurus TCP 738. The line is most notable for its competitive price even among other less expensive brands like Kel-Tec or Ruger, and being a conceal carry gun with a slide lock.

The Taurus PT 732 is chambered in .32 ACP, has a double action only trigger with a trigger pull of 5 to 7 pounds and as a package it comes with two six-round magazines, and fixed front and rear sights. It’s constructed with a stainless steel slide and barrel, and a polymer metallic sub frame grip.

What makes this the best choice in my view for a the smaller conceal carry handguns is its dual safety features that includes a loaded chamber indicator and a built in trigger lock with two keys. The safety feature is super easy to use and has never failed me.

The Taurus PT732 as a package comes with a case and two magazines (only one shown). (Photo credit: TaurusArmed.net)

I have put quite a few rounds through this pistol and I cannot get over how accurate and straight this little gun shoots. Even though it isn’t a nail driver, when using the standard human silhouette target at the range shooting at 7, 10 and 12 yards I hit the target with every shot never veering outside the silhouette. And I have had zero problems with feeding or extracting the casings and the recoil is minimal.

The gun is super easy to conceal either in a coat or back pocket or directly on your person. When concealed the gun is big enough for you to know that it’s there, but not bothersome.

Lastly, the gun is quite easy to take apart and clean but takes a little more time on reassembly as the pin going back in is a bit tricky. However, I would not categorize this as a negative in anyway. I think I was trying too hard and too fast when cleaning it for the first time, so just take your time the first time around.

Honestly, I do not see any downside to this gun, though I am sure some would say it is a bit small.  For me it was the perfect purchase and the perfect size for conceal carry.

If you are on the fence and trying to decide on a conceal carry handgun look no further than the Taurus PT 732 TCP .32 ACP pistol, you won’t regret your purchase in my honest opinion and you will look forward to shooting it as often as you can, I know I do!