The best 6.5 Creedmoor ammo for hunters 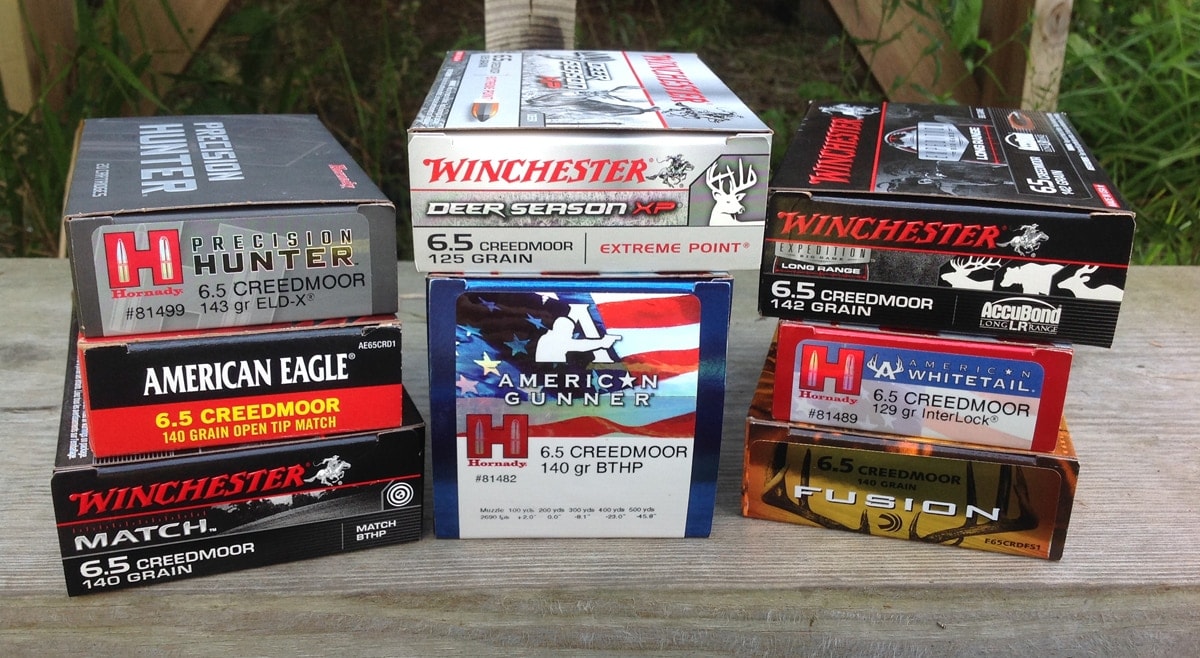 The ammo selection. The Winchester XPR rifle did well with all, but groups really tightened up at range with the heavier bullets (Photo: Kristin Alberts/Guns.com)

With a deluge of 6.5 Creedmoor rifles flooding the market in 2017, there are plenty of ammo options for shooting long ranges. While many of them are geared toward long range bench rest shooters, there are also great offerings for hunters. After numerous antelope and deer fell to our Winchester XPR in that caliber, we know the rounds that perform. Though they’re all capable of MOA accuracy from the bench, we chose these for their performance on game.

Hornady’s line of Precision Hunter ammunition with ELD-x bullets has been setting the standard for long range, controlled-expansion hunting ammunition based on both their technology and wide range of caliber and bullet weight offerings.

They were one of the first to the 6.5 Creedmoor table with their 143-grain Heat Shield tip bullets.  Long range shots of 400 yards or greater are well within Precision Hunter’s knockdown capabilities, with the bullet built for controlled expansion at distances.

Although Precision Hunter will work on most game, it really excels on deer sized or even larger critters, making this the idea ammo if you plan to push the limits of the 6.5 on bigger game. Though wind limited our shot range, Precision Hunter made quick work of a whitetail just over 300 yards and an antelope just under that distance, with neither taking more than a few steps.

Priced at $32.50 per 20 rounds online, the Precision Hunter has been earning its keep with serious hunters whose terrain has the potential for long shots. 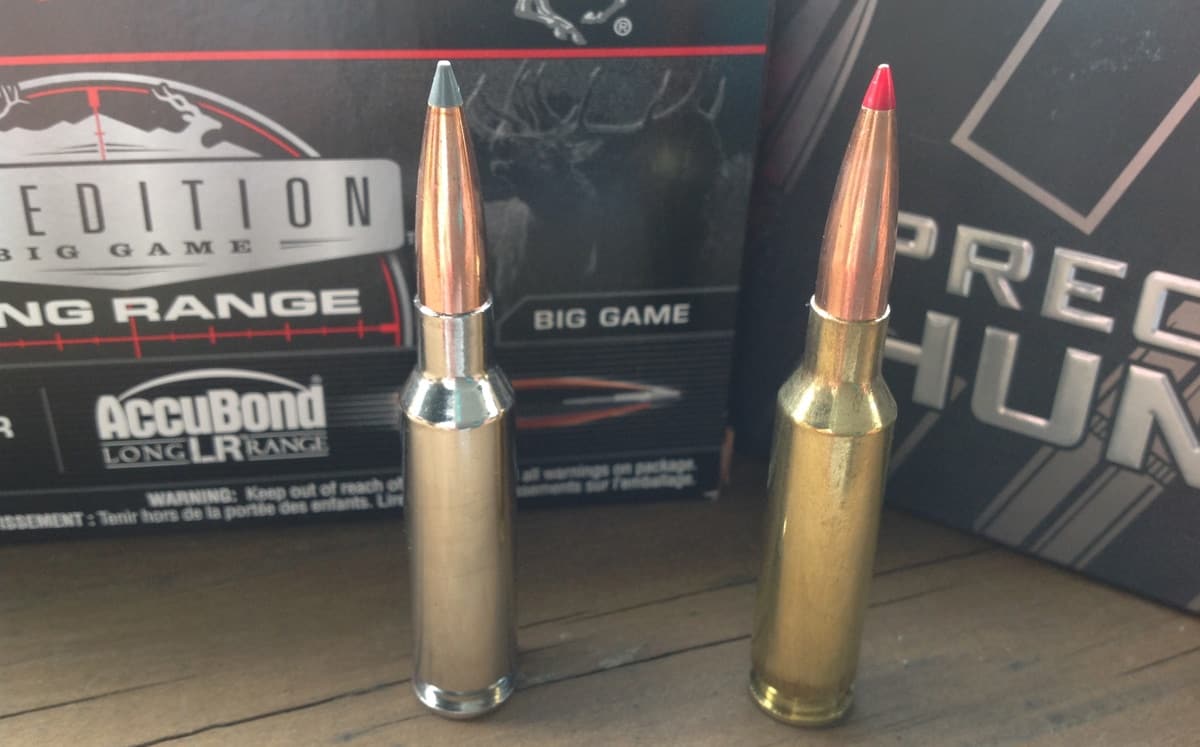 Winchester Expedition Big Game Long Range is a big name for a major performer. It features Accubond Long Range 142-grain polymer-tipped boattail bullets. The bonded lead alloy core means both core and jacket are welded together for weight retention and deeper penetration in larger game.  Along with the Hornady Precision Hunter, Winchester’s Expedition Big Game is a step up in 6.5 Creedmoor ammunition.

If you’re thinking longer ranges – say more than 300 yards – and/or game from deer size on up, you’ll want to consider one of these two products geared for long-range, controlled expansion, and knockdown power. Though it may be a bit on the heavy side, the through-shot on a large whitetail buck at 330 yards meant less than a 25 yard “track.” Available online for $29 a box, Expedition Big Game is the most affordable of the long range hunting options, and one of our favorites overall. 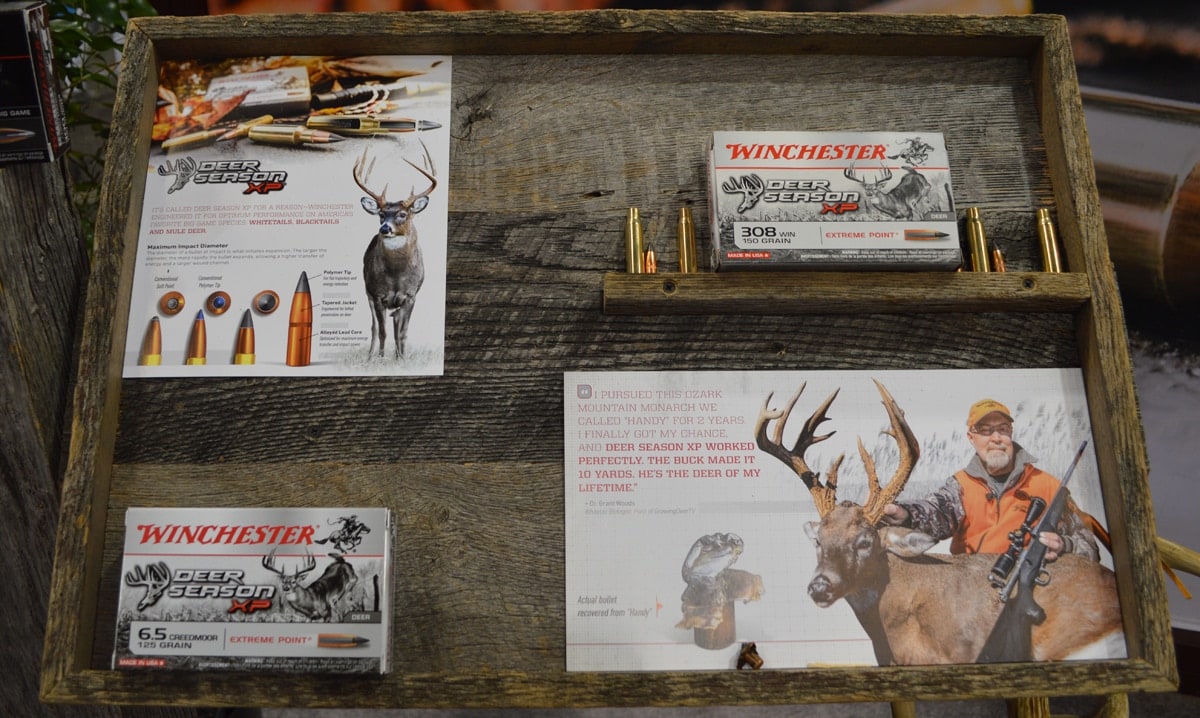 Winchester Deer Season display at SHOT where 6.5 Creedmoor was added to the lineup. (Photo: Kristin Alberts/Guns.com)

As the name suggests, Deer Season is optimized for whitetail hunting with its 125 grain Extreme Point polymer tipped bullet.  The alloyed lead core and ballistic tip are intended for rapid impact expansion, making it ideal for game like whitetail, blacktail, and mule deer, though we also used it with success on antelope.

Naturally, Deer Season XP will not be a good choice for much larger game or terribly extended ranges, though I felt confident shooting it to 350 yards. Online prices at $22.00 for 20 rounds make this one of the most affordable hunting rounds on the Creedmoor market. 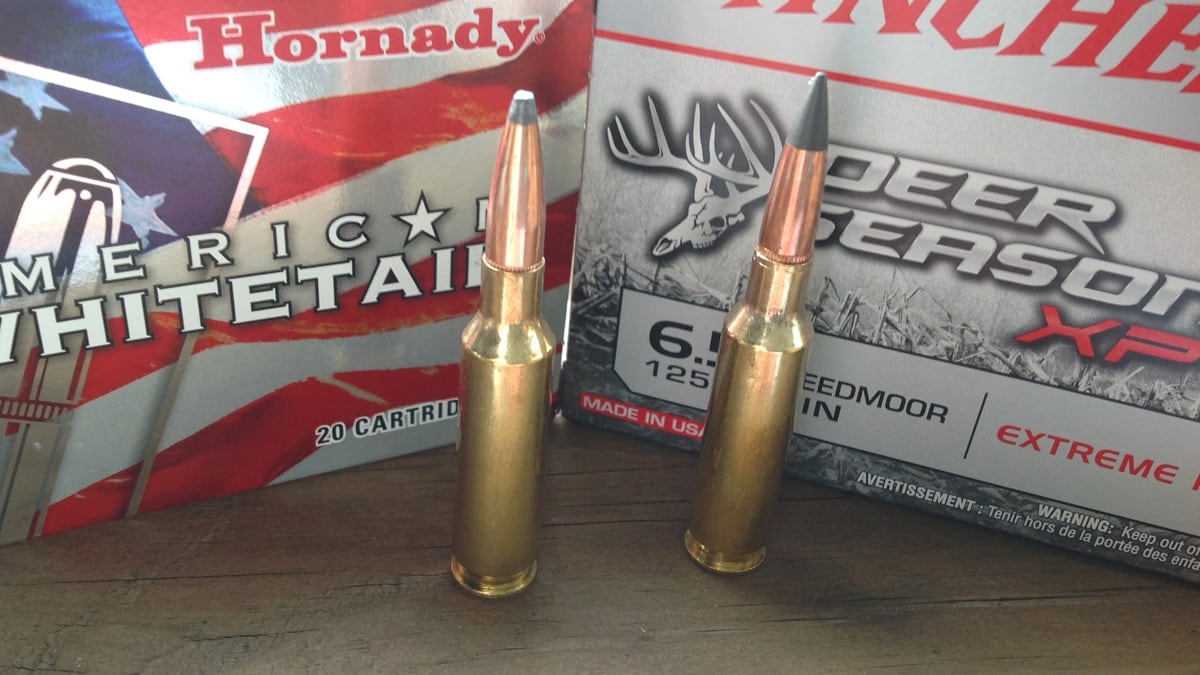 American Whitetail is much like Winchester Deer Season XP, sans the polymer tip.  Rather, Hornady here opts for more of an age-old soft-point Interlock bullet in 129-grain.  Similarly, Interlock bonds the core and jacket together, while the lead alloy core performs well on the same whitetail-sized game as the Deer Season. While it may well be capable beyond, I consider American Whitetail a reasonable, capable deer round out to at 300 yards. Price is also right in the midst of reasonable 6.5 Creedmoor hunting ammo at $23.00 a box.

Federal has a number of 6.5 Creedmoor ammunition offerings, but as an all-around, accessible hunting round, Fusion is a reasonable choice. With a 140-grain soft point bullet, hunters get serious knockdown power on antelope and deer at lesser ranges.  This is not a 400+ yard reliable killing bullet, but again, it’s not purported as such. The pressure formed core, fused jacket, and boattail profile performed well on target through our XPR, with nice groups out to 200 yards, had some solid impact on deer, and would do well on hogs, too. Unfortunately, the Fusion brass doesn’t seem to be the highest quality for reloaders, though, but at $24 a box online, Fusion works just fine for casual hunters who like to deliver a whallop.

In a name known for superior performance, the Nosler Ballistic Tip 6.5 Creedmoor is no exception. Advertised for use on antelope, deer, and hogs, we have no doubt it would perform well on all of them and more. Nosler also offers a 140-grain ballistic tip, but we tested the newer 120-grain, which is moving out of the muzzle at 2,900, the fastest of all the hunting rounds. The brown-colored polymer tip is not the most attractive of the lot, but it performs. The round is the lightest 6.5 Creedmoor bullet we shot. Its zippy speed helped take flip an antelope at almost 300 yards for a clean, efficient harvest.  At $31 a box online, it’s certainly not the cheapest, but Nosler is good medicine. 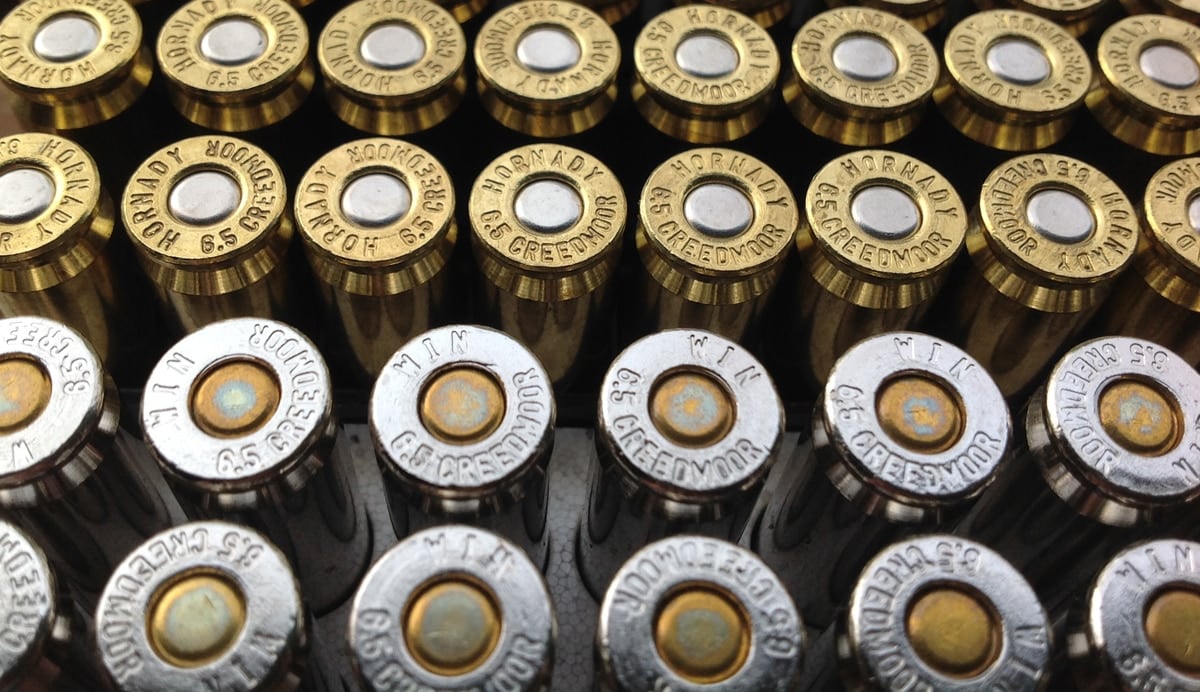 The 6.5 Creedmoor cartridge may be a long range target round, but it’s also a formidable hunting caliber with the correct ammo. (Photo: Kristin Alberts/Guns.com)

While the above half-dozen are solid choices in the Creedmoor hunting world, we have only just begun to see the options.  Several major players, including Federal’s Edge TLR and Sig Sauer’s Hunter Elite will be right there with the above options, though neither have ventured out of the .30 caliber market at the time of publication.