When cash is low, it just isn’t practical to have more than one shotgun for hunting and home defense. After all, the bills still need to be paid. Instead, combining the two is the best option and this is where the Mossberg 500 still shines brightest.

There are a couple different approaches you could take to having one gun with more than one purpose. The most expensive of these is buying more than one barrel that can be swapped out depending on your need. In other words, when you get home from hunting, you have the option to put a short barrel on the gun for home defense. This is a totally viable option and is really easy with a Mossberg 500.

But, as I said, it is more expensive because it involves the purchase of an additional barrel, which can tack on another $60 to $180 to your bill.

Extra barrels of different lengths can turn one gun into many and play out particularly well on the Mossberg 500 platform, though more barrels mean more cost. (Photo: Armslist)

This next part is where I differ from some of the other gun and hunting enthusiasts out there. Many hunters will tell you that you need a long barreled shotgun to go hunting. While it is true that the longer barrel does help in some cases (like when hunting waterfowl), using a short-barreled shotgun, say 18.5-20” long, is fine for hunting anything walking on four legs – just as long as you go about it the right way.

So if money is truly an issue, and you want to bring food home and have the option to protect your family, a single Mossy 500 barrel will do the trick. Here are a few tips for when you go hunting with a short barrel and when you need to protect your home:

1.  Having a shorter barrel reduces the effective range of your projectile.

In other words, it is better to be closer to the animal because you have more accuracy at a shorter distance. Some short barreled hunters try to keep it at less than 50 yards with a clean shot.

2.  Go for slugs over buckshot for larger game.

If your municipality allows, using a slug is the best choice for taking deer when using a short barrel. The shorter barrel won’t likely have as big of an impact on a slug as it will on buckshot. Just make sure your gun is set up right first.

3.  Make sure your gun is properly choked.

The use of different chokes goes beyond the scope of this article. However, you’ll want to make sure you’re using the correct choke for whatever you’re hunting.

4.  Don’t use the cheapest ammunition you can find.

You’re already using a short barrel shotgun, so you’ll want to stack the odds as highly in your favor as possible. 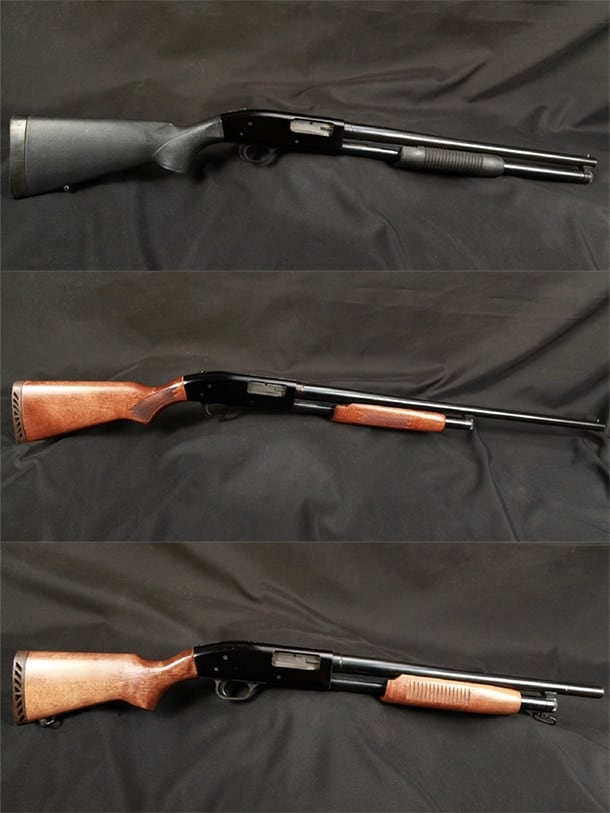 The Mossberg 500 platform of 12-gauge shotguns come in more makes and models than this article can cover but basically all fall into either hunting or home defense varieties, depending on the materials used and the length of the barrel. A short length barrel can however be used for effectively for hunting by adopting a slightly different strategy in the field. (Photo: Gun Auction)

1.  Use the shorter barrel to maximum effect.

Short barrel shotguns are great in home defense situations because they are more easily maneuvered around corners and in tight spots. Identify these tight spots as a part of your home defense plan.

It is a common misconception that having an empty chamber is best because any criminals who hear you rack a shell will flee at the very sound. If they’ve got methamphetamine or PCP running through their veins, chances are good they won’t even hear the sound, so keeping a round in the chamber at all times is the best practice.  Each second matters, and if you need to take the time to send a shell into the pipe, those are lost seconds.

In some cases, birdshot will not stop an aggressor. In fact, sometimes it will just make them angrier. I think it is best to load 00 Buckshot with a round in the chamber and stored with the safety engaged in an area where the kids can’t get to it.

Once those projectiles leave the tip of the barrel, you own them. This means that you need to make sure that there are no loved ones behind the perpetrator or elsewhere in the line of fire. Professionals call this situational awareness. You always want to know what is going on all around you.

5.  Respect how extreme stress will affect your body.

Realize that tip #4 is going to be close to impossible because you’re likely going to be a mess of adrenaline and emotions.  Training under stressful conditions and performing a pre-mortem can help limit these incapacitating effects.

Finally, when you call the police to report your defensive use of a gun, don’t say anything incriminating. In fact, don’t say anything other than: I used my gun in self-defense, and I want my lawyer. Chances are good that you have no clue exactly what happened – even if you think you do. If you say something stupid, you won’t be able to back yourself out of it later on.  Remaining quiet until legal council is present is your right and you should invoke it by default after a defensive gun use.

The Mossberg 500 is an economical choice for those of us who cannot afford more than one long gun for hunting and home defense and can be used to effectively fill both these niches if the shooter tailors their habits to the tool and the task. A true multi-purpose gun, they can be found used for around the $200 mark.