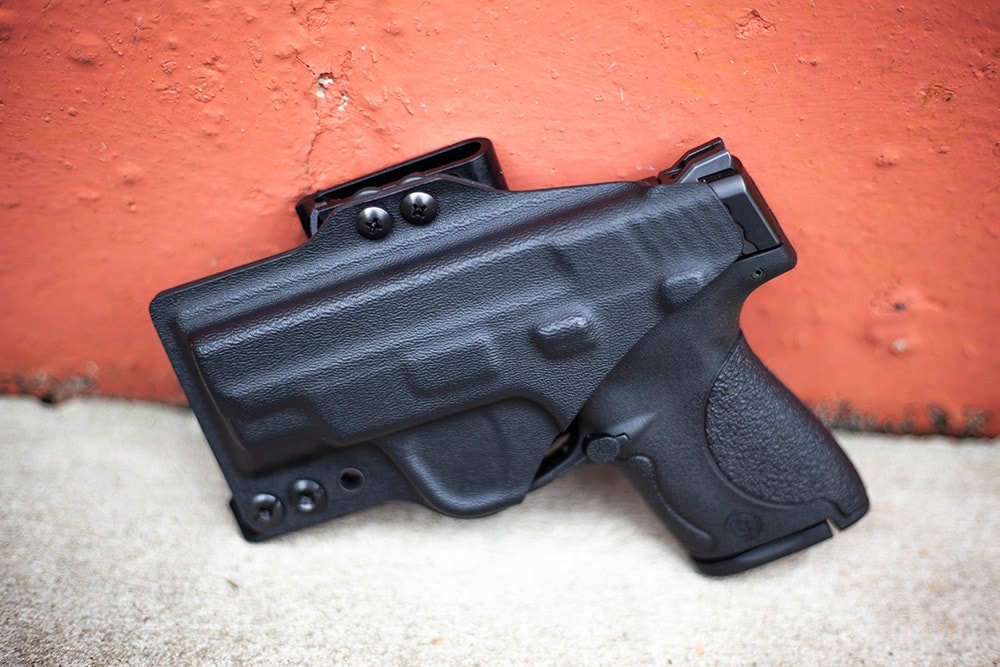 Bravo Concealment delivers a basic yet budget friendly approach to concealment, offering a range of holsters for value driven prices. The Drop Out-Of-Sight holster, or D.O.S. as it’s known, is one such offering from the holster company. A Kydex design, the D.O.S. looks to fill that sub $50 molded holster market. In order to get a better grasp on how well the D.O.S. fulfills that role, I got my hands on a D.O.S. model built for the Smith & Wesson Shield chambered in 9mm.

The D.O.S. adopts a minimalistic approach to concealment, ditching trendy features in favor of a more simplistic design. The inside-the-waistband rig features a molded, Kydex shell set against two clips that mount to the wearer’s belt. An all-black style, rigorous detail has been added to the shell accommodating for each and every nook, cranny and groove on the 9mm Shield. This design equates to one significant bonus for the holster – retention – but more on that later.

The D.O.S. shell is enclosed on the muzzle end, ending any hopes of a threaded barrel or muzzle device; then again, the hope of the D.O.S. is to deliver a more compact solution so this construction makes sense. The holster body feels slim yet sturdy, striking a decent balance between a low-profile and durability. 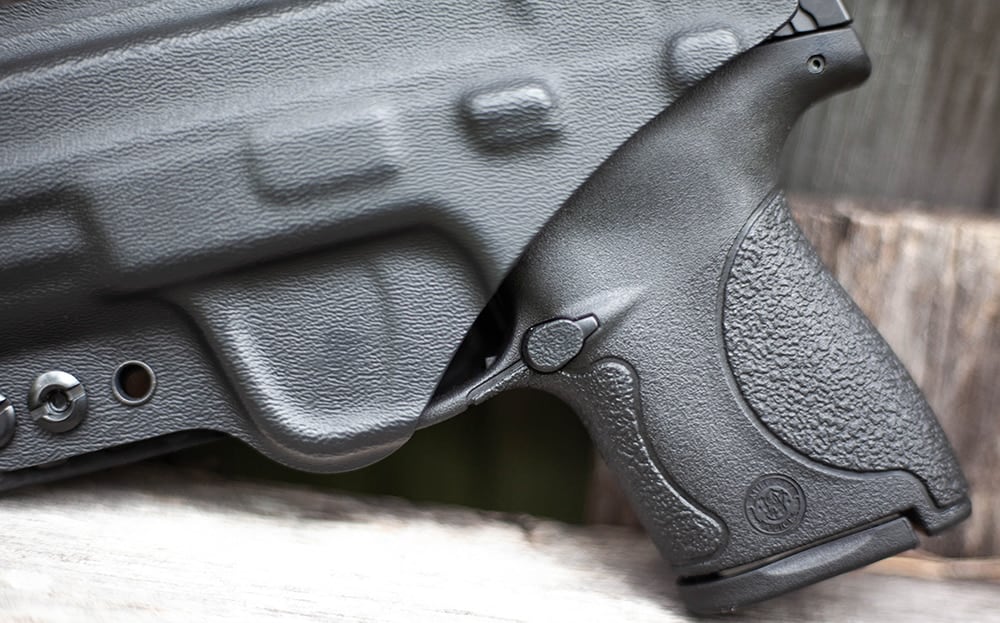 The space between the gun and holster initially caused the author concern, but later proved to be a non-issue. (Photo: Jacki Billings/Guns.com)

The D.O.S. opts for a two-clip approach as opposed to the standard one clip that many holsters are favoring these days. The clips forgo the standard look, opting for a look more reminiscent of an OWB model but easier to slip on and off. The clips are made from a plastic material that, over time, could potentially suffer from wear and tear. It’s recommended that users regularly examine gear for weak or failure spots before donning and in the case of plastic belt clips this area specifically should garner greater attention.

Bravo Concealment put some extra focus into the clip design, adding the ability for users to alter the position of the longer of the two clips to adjust for cant and ride height. The shorter clip can also be removed from the rig to allow users even greater conceability with the use of just one longer belt clip.

The D.O.S. sticks to straightforward Kydex style. What you see is what you get with this holster; but there is a level of flexibility at its core. The D.O.S. is capable of functioning as a standard IWB rig, worn strong side, or as an appendix IWB. Again, those handy belt clips come into play allowing users to cant the holster and gun for whichever mode of carry is preferred. In the regular, old IWB position, the D.O.S. performed superbly. It blended well underneath an array of outfits, to include solid colors and t-shirts. 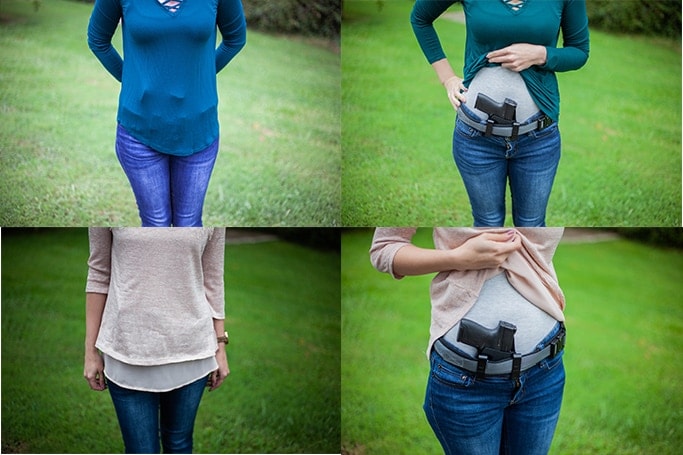 The holster worked best in IWB position but with the right body type could work in AIWB. (Photo: Jacki Billings/Guns.com)

While the thinner Kydex definitely aides in concealment, the lack of a wedge or claw proved to make AIWB more difficult for me. Granted, I am on the petite side and a claw/wedge is almost always a requirement for me to carry flawlessly in the AIWB position.

I could manage carrying in AIWB with the D.O.S. and Shield in flowy, looser fitting outfits but tighter tees and blouses were out. On the other hand, I found the four-o’clock IWB position near perfect for me and the D.O.S. In short, if you are on the smaller or skinnier side, AIWB could prove more of a struggle.

Bravo Concealment’s attention to detail pays off in the realm of retention. The D.O.S. knocks retention out of the park, offering a seamless integration between gun and holster. The Shield slides right into the holster and audibly clicks into place, giving users that reassurance that the gun is being securely held by the holster. 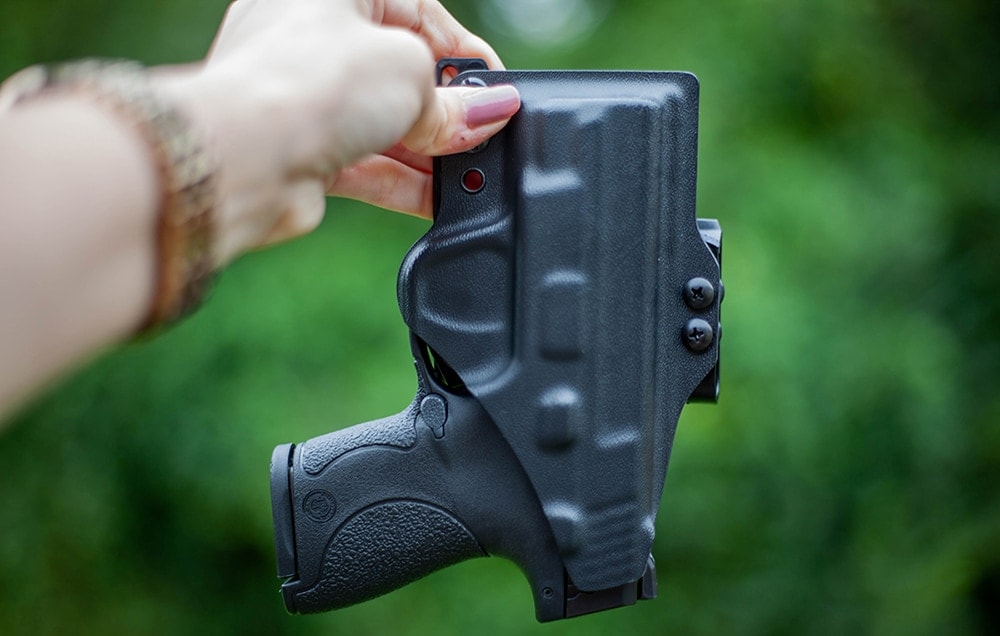 Retention on the holster is excellent, allowing the gun to be manipulated without fear of falling from the rig. (Photo: Jacki Billings/Guns.com)

In the course of reviewing, the D.O.S. was turned upside down, right-side up, sideways and just about any other manner I could think of to get it to unintentionally release the Shield from its grasp. That never happened. The D.O.S. successfully retained the Shield throughout the entirety of my testing.

However, an area of concern was a little slip of space in the holster’s trigger area. Although my fingers couldn’t fit into such a small space, I worried something smaller – like a child’s finger – could. But after repeatedly trying to circumvent the design with everything from a pair or thin scissors to a pen, I found there just wasn’t enough space to gain the leverage needed to manipulate the trigger. Could something enter that space theoretically, yes, but is it likely – no.

Priced under $50, Bravo Concealment’s D.O.S. holster marries a durable, functional design with a price that nearly anyone can afford. Available in the ever classic black, the D.O.S. is a true no-nonsense molded Kydex that meets the requirements of a quality concealed carry holster.