The year was 1896 and things were changing rapidly in the firearms world. The development of smokeless gunpowder had ushered in a world that could only be called a nirvana for firearms designers.

New rifles and revolvers were quickly making established arms obsolete, and in the political instability that reigned in Europe as the turn of the century approached, the armed forces of nearly every nation on that continent were buying the newest and the best.

Just three years before, in 1893, Hugo Borchardt had designed a repeating handgun that did not rely on a rotating cylinder, but rather, used the wasted energy of the gun’s recoil to operate a mechanism to remove the fired case from the pistol’s firing chamber, throw it clear, and reload the chamber from a magazine of cartridges that was kept at the ready.

All-in-all this was nothing short of astounding. Herr Borchardt also designed a new cartridge for his self-loading pistol: a 7.65mm projectile that weighed 85 grains and had a velocity at the muzzle of approximately 1,300 fps. This would have been impossible using blackpowder. The cartridge case was 25mm long and was both rimless and bottlenecked. The only drawback of Borchardt’s pistol was that it was truly awkward, both to carry and to use. Several arms designers set about trying to correct that one flaw. 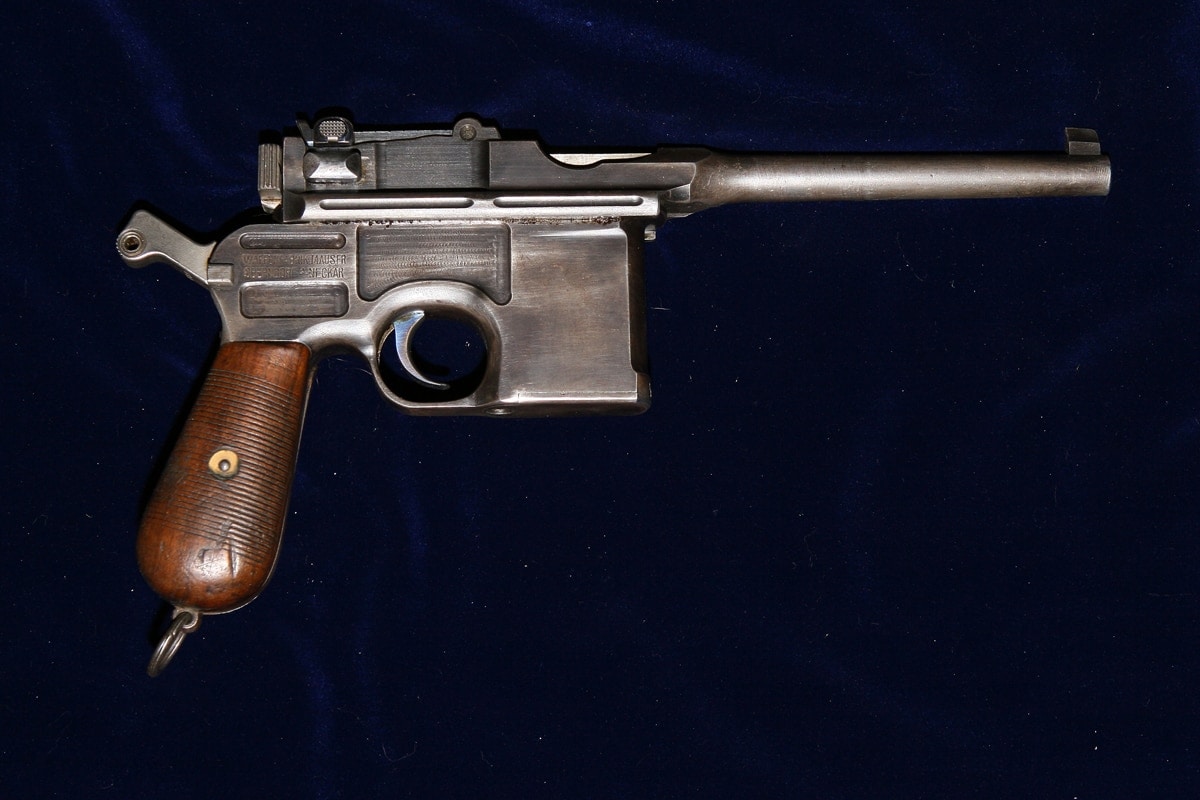 In the Mauser company that job was assigned to the Feederle  (or “Federle”) brothers: Fidel, Friedrich and Josef. They came up with a design that was much more practical to use and was of even higher power, though the cartridge was based on the 1893 Borchardt design. Paul Mauser patented the design in 1896, and called it the “Mauser Military” pistol, an obvious attempt to interest various governments in it as a military sidearm. Mauser was singularly unsuccessful in getting any country to officially adopt the Broomhandle as an official military sidearm. Perhaps this was just a matter of bad timing, since war was imminent (though no living person could have predicted just how extensive the upcoming conflict was going to be) and no military man wanted to change arms to a new and unproven type when a war was about to begin.

Nonetheless, the C-96 was bought by great numbers of individual officers and even enlisted men and was used to good effect in the Boer War by a young British correspondent by the name of Winston Churchill. Later, in World War I, Col. T.E. Lawrence was known to have carried one. Due to difficulties producing enough Luger pistols fast enough, the German military authorized the manufacture and issue of C-96 pistols chambered for the German-standard 9mm Parabellum cartridge. In the years between the two World Wars any number of groups bought C-96 pistols from Mauserwerke and they spread around the world.

Back before the passage of the Gun Control Act of 1968 these pistols (usually called “Mauser Military” in those days) were sold by mail order for a whopping $39.95.

But just what was this revolutionary firearm? Well, the C-96 Mauser was and is a locked-breech semiautomatic handgun that fires a fairly high-powered cartridge. The bolt is locked to the barrel extension by means of a pivoting locking block — a method still used today in the Beretta M9 U.S. service pistol. Upon firing, the barrel and bolt (being locked together) move rearward under the force of recoil against a heavy spring. The time it takes for this to happen allows the bullet to travel down the barrel and exit the gun. Next, the rearward movement cams the locking block downward allowing the bolt to move completely to the rear against the lesser force of its own recoil spring, compressing that recoil spring and extracting and ejecting the fired cartridge case. While this is being done, the rearward motion of the bolt re-cocks the hammer. The recoil spring then pushes the bolt forward, picking up a new cartridge from the magazine and chambering it. The gun is now ready for another shot.  This all happens faster than you can pull the trigger. 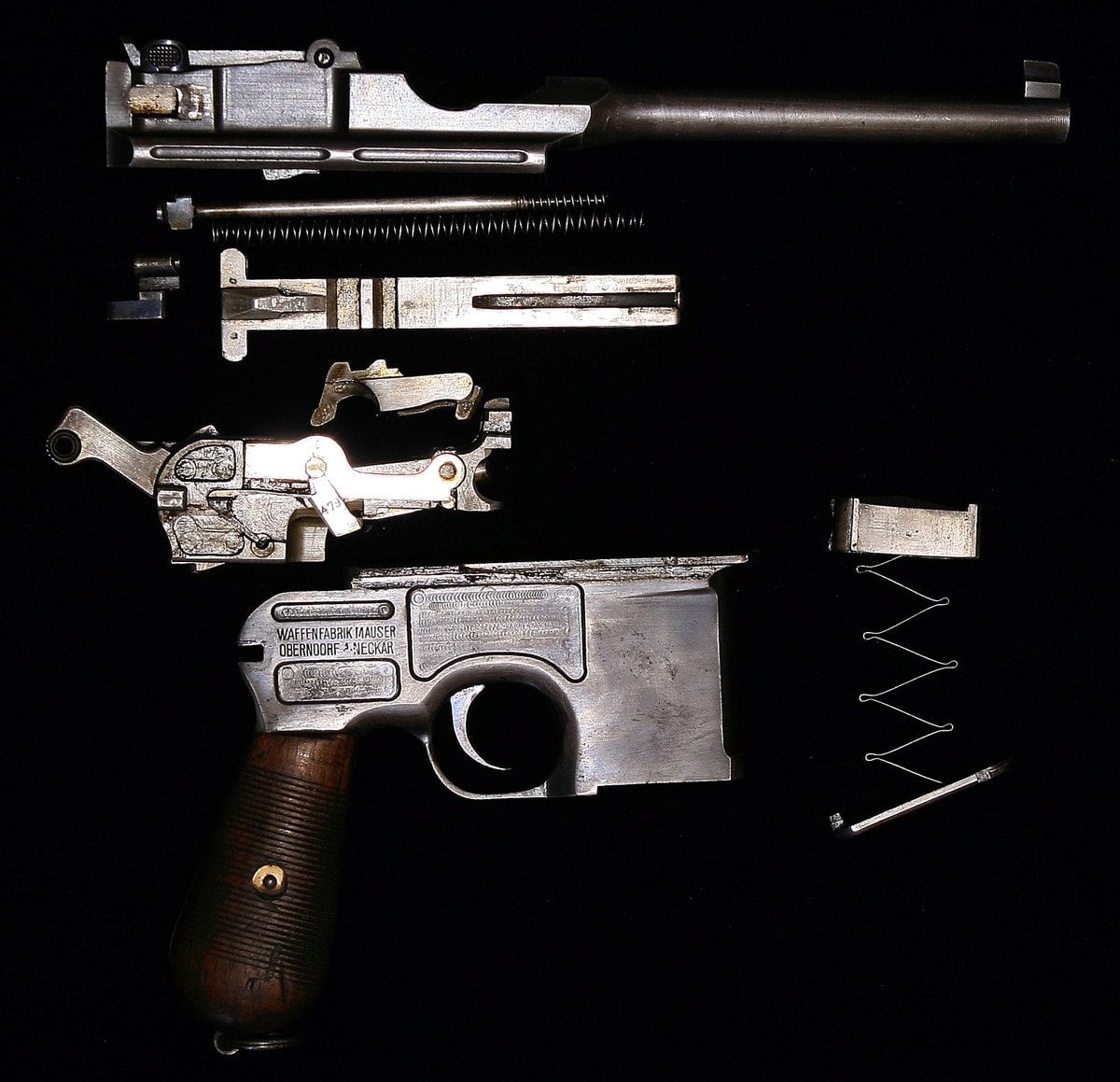 The C-96 breaks down so easily! MMmm… maybe not.

All this marvelous mechanical movement is accomplished by parts that simply fit together “just so” without resorting to any pins or screws (except for the one screw that serves to hold the grip panels to the gun’s frame). By the way, Americans thought that the gun’s grips resembled the handle of a broom, and the name “Broomhandle” just stuck.

But, how well does all this actually work? Even by modern 21st Century standards a Broomhandle in good condition actually performs rather well. It shoots accurately and with considerable power. It is surprisingly reliable — this reviewer is of the opinion that the design is exceptionally reliable, and that any failures are due to age and lack of proper maintenance, though how mud and sand in the shooting environment would affect it is likely to be left a moot point as no owner of a C-96 in good or better condition is likely to allow such tests to be performed.

It does have its drawbacks though. The bore axis is quite high relative to the grip, which slows target re-acquisition from one shot to the next, but not as much as one would expect. This is probably a function of the light bullet used, as that minimizes the recoil force. Many years ago this reviewer shot a “Combat Pistol” (as we called it then) match with my old C-96 and a double-handful of stripper clips of ammo. I wound up somewhere in the middle of the pack, just where I usually did with my modern guns. The old Broomhandle did its job and did it well. It is quite large and somewhat awkward, but then it was never intended as a concealed-carry pistol!

The stock slides right on for — err — comfort.

Speaking of carrying, I am fortunate enough to live in a state that allows open carry, and one day there was a “carry-in” activity to express our thanks for a major coffee house chain that allows any carry that is in accordance with the state laws wherever its shops may be located. I strapped on my C-96, complete with Sam Browne belt and went out for a quick cup of java. The only comment I got was from another shooter: “That’s an old one!” I felt quite well enough protected even though a modern rig might be a bit faster to use — and far more discreet.

Just how does shooting a Broomhandle feel? Not as odd as one thinks at first. It looks a lot more awkward than it really is. The recoil is in line with modern 9mm Parabellum pistols. The sights are small, but quite visible and easy to use — and usually right on the mark — though the calibration out to 1,000 yards gives new meaning to the word ‘optimistic’. Reloading via stripper clip takes a little practice, but can be learned. Yep, there is a fair amount of muzzle flip. That’s something else that you have to learn to deal with. The trigger on most examples feels light and crisp. The trigger on my 1914 vintage Broomhandle breaks right at 5 pounds with no perceptible creep at all. Most of all, it’s just a heck of a lot of fun!

Perhaps this is as good a place as any to run down the specs of the most common C-96 variant. As mentioned, this is a locked-breech semiautomatic pistol utilizing the “short-recoil” operating method.

And a common accessory is an attachable wooden stock that can actually be holstered. However, the holster/stock is a usable, but not convenient, holster and it doubles as a fairly functional shoulder stock.

As the figures show, the old Mauser may be somewhat more awkward to carry and use than John Browning’s model of 1911, but it only weighs about an ounce more, just to use a well-known example. 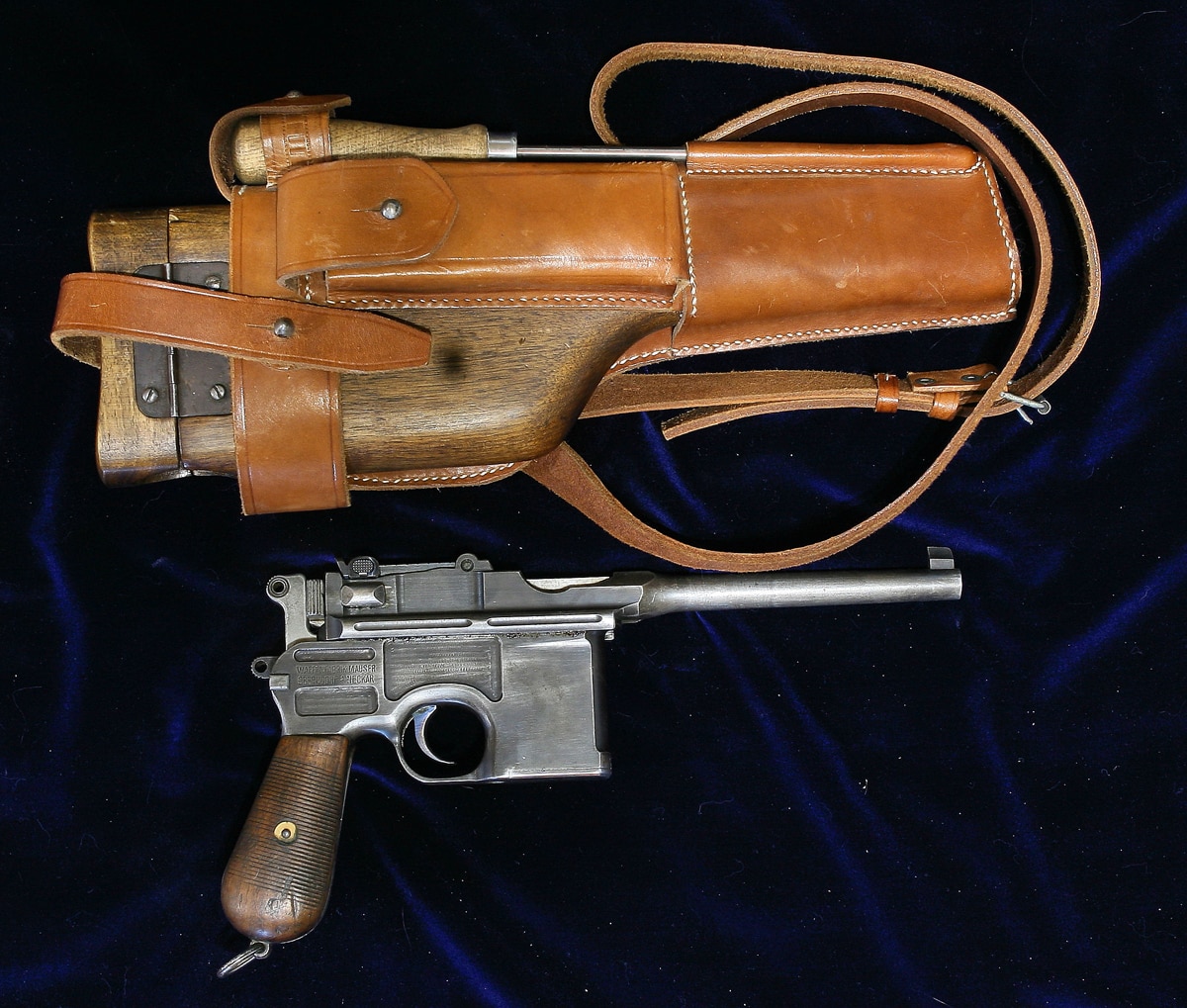 Ammunition for a 7.63×25 Mauser (aka .30 Mauser) is available at the current time – or at least it is no more scarce than other ammo is right now – from Fiocchi just to name one that I have used. The Fiocci ammo is also boxer-primed for those of you who want to reload it.

The 7.63×25 Mauser was the highest-velocity cartridge in the world up until the advent of the .357 Magnum in 1935. Any gun that can propel an 86 grain bullet to a muzzle velocity of 1,450 fps is pretty respectable, even by modern standards.

7.63×25 Mauser and 7.62×25 Tokarev are dimensionally interchangeable, but they are NOT the same. The Tokarev ammo is loaded to higher pressure than the Mauser ammo. Think about that for a while and then consider that your Broomhandle is probably about 100 years old. 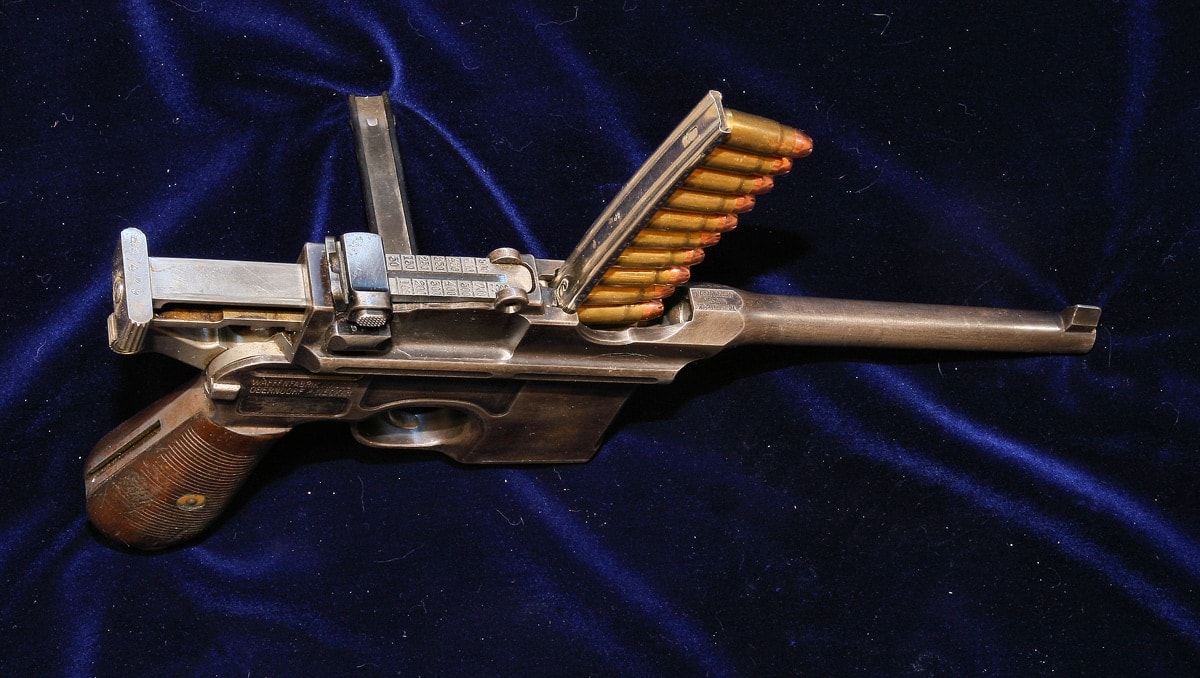 The C-96 (“Broomhandle”) Mauser is a very historic pistol and a ton of fun to shoot. It’s not every day that a person can pick up a true piece of history and actually use it! Like John Browning’s great 1911 pistol, it is still functional after 100 years.