Gun Review: Believers! Put your faith in the Citadel 1911

Back in September of last year I was looking for an inexpensive but totally reliable 1911 that I could carry or just simply toss into the console of the truck without worrying about scratching or dinging up.

That’s when I came across a sales advertisement from Academy Sports showing a Citadel M1911 .45 caliber for $499. Well, I hotfooted right over to the store to have a look.

When the salesman handed it to me, a brand I barely knew but price I really liked, I naturally gave it the shake for rattles test and was quite pleased to find not a single rattle or play between slide and frame. I thought to myself, “This will do.” But I would soon discover that this pistol will do so much more!

The Citadel 1911 sprawled out for a glamour shot. (Photo credit: Gun Auction)

The Citadel 1911 is manufactured in the Philippines by Armscor and distributed in the states by Legacy. It’s based on the time tested Browning design, single-action recoil operated semi auto, and, same as the original, built to withstand dang near anything.

The barrel, frame and slide are forged steel, and it has a Parkerized, matte black finish. The slide has deep grooves on both the front and rear, and it’s equipped with a skeletonized trigger, hammer, an ambidextrous safety and Walnut grips. 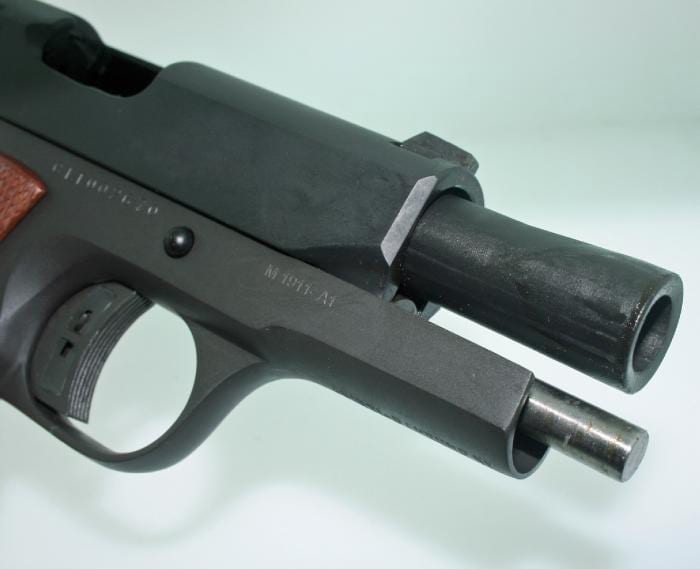 The Citadel 1911 is equipped with Novak style sights and although the sights are not white dot, they are plenty good for my 65 year old eyes.

The barrel has six grooves with a 1 in 16 inch right hand twist and a full length guide rod.

After stripping it down and giving a good cleaning I headed for the range. With me, I brought along a selection of ball and hollow point ammo — even some rather old Blazer HP’s I forgot I had.

The first hundred or so rounds I wasn’t even trying for any kind of grouping, I just wanted to check for reliability. Everything fed, and functioned perfectly even the old Blazer rounds.

Suffice it to say, this pistol will just chew the center completely out of a B24 target at all four of the yardages mentioned, whether slow or rapid fire. And not once did I have any failure-to-feed or failures-to-eject with any type off ammo. 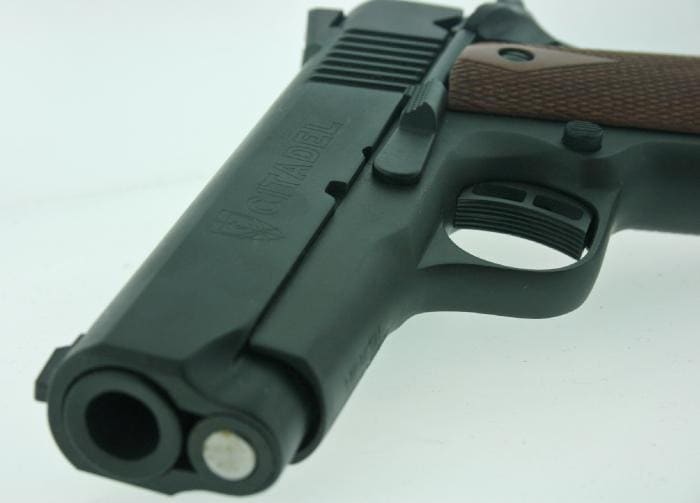 The Citadel 1911 exhausted after a hard day at the range. (Photo credit: Gun Auction)

It’s now seven months since I purchased this pistol, and I’ve put approximately 3,000 rounds through it. The only things I’ve done are clean it and put a set of Harrison design carry grips on it. It continues to shoot and function perfectly.

I’ve owned a lot of pistols over the years, but only a very select few did I have complete faith and trust in as a carry weapon. The Citadel M1911 is one of them, and I do not make that statement lightly. For the money, I think the Citadel M1911 is hard to beat.