The DDI AK47F is a milled menace (VIDEO)

The issue of milled vs stamped AK receivers is a divisive one. Proponents of stamped guns argue milled guns are unnecessarily heavy and have limited aftermarket support. While the other side contends stamped guns aren’t as accurate or durable as their milled forefathers. The real advantages of milled guns are increased rigidity and a smoother action. My only gripes with milled AK carbines are price and lack of side rail for optics. Thankfully the engineers at Destructive Devices Industries feel the same way. So they created an affordable, optic-friendly milled AK rifle, the AK47F. Chambered in 7.62x39mm. 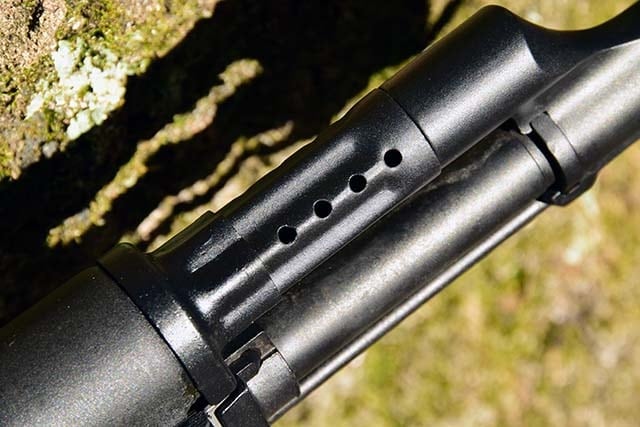 Built from the ashes of the once-lauded Waffen Werks LLC, DDI bought the remaining assets and fixed the quality control issues that plagued Waffen. In a gesture of good faith they honored all the warranties on WW guns that had driven the previous company to bankruptcy. They didn’t just fix the QC issues though, they also learned from Waffen Werks mistakes and slimmed the product line to just two carbines. A fixed stock and under-folding stock model. Both built from Bulgarian parts kits on new production milled receivers with 16 inch, US-made Green Mountain barrels.

Since DDI uses Bulgarian parts kit in their carbine’s construction, they must use parts made stateside to avoid running afoul of 922r. Which is one of the reasons they use a Tapco G2 trigger pack in their products, other reasons probably deal with the trigger-slap that original FCG cause. Additional US parts include a bullet guide and Tapco pistol grip which perfectly matches the Arsenal furniture on the AK47F.

Sticking to their milled-construction roots, DDI’s rifles feature ventilated gas tubes and a two-tang rear trunnion. The main way DDI’s rifles differ from standard milled AK rifles is in their inclusion of a side rail that greatly expands the weapon’s versatility by allowing users to mount optics of their choice. The other difference is the pistol grip employed. Milled guns normally use a special mounting plate and wooden pistol grip. The DDI rifle uses standard AKM pistol grips. 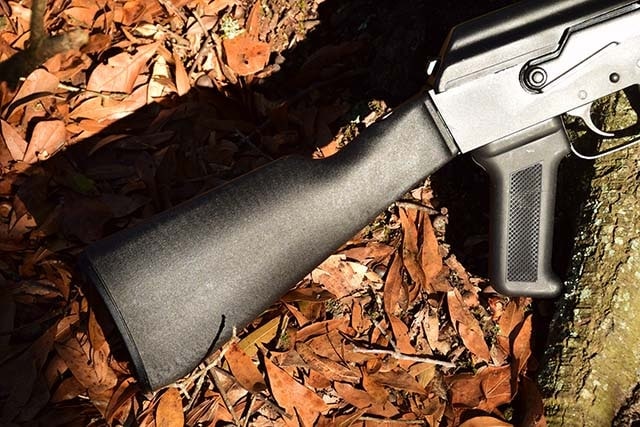 The DDI AK47F pistol grip is normal AKM type, but the stock is specially designed for its two-tang rear trunnion. (Photo: Jim Grant)

Most AK rifles on the market can’t be described as beautiful, at least not in the traditional sense. That said, the DDI AK47F is stunning in the same way as a stealth bomber. The KG Gun Kote finish adorning it is the same deep black color as the Bulgarian furniture. Plus, Gun Kote is much more durable than the finish that Izhmash puts on their Saiga rifles which is closer to grill paint. Though Saiga guns are parkerized underneath.

Shooters familiar with milled AK rifles understand that certain je ne sais quoi of charging the action of a quality rifle. Like a well-loved M1 Garand or M14, the action on the AK47F is so smooth it could sell used cars to the blind. Compared to stamped guns whose actions have points of resistance throughout the cycle, milled guns are consistent throughout. The DDI AK47F almost feels hand-fitted it’s so smooth. 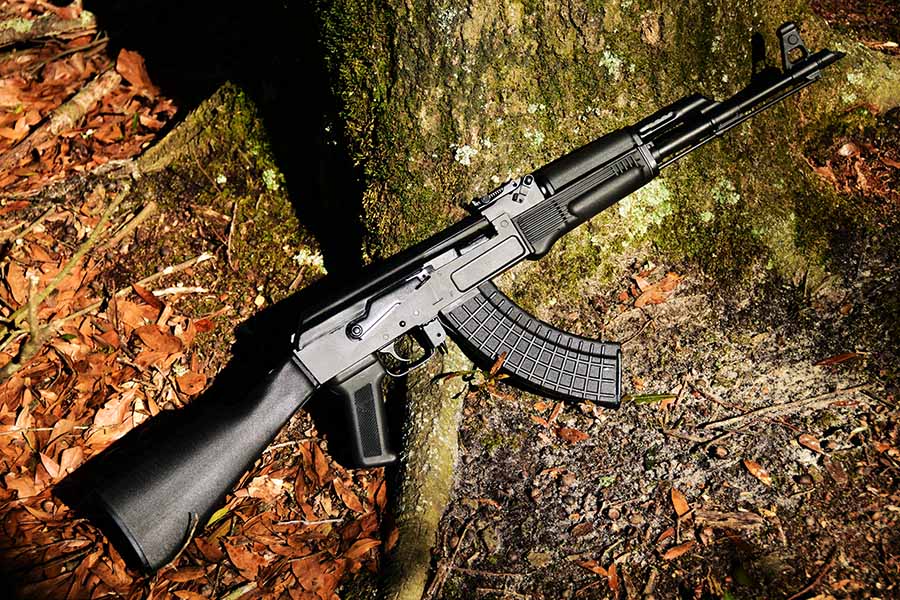 The DDI AK47F might not be what most call beautiful. But to me, it’s a work of art. (Photo: Jim Grant)

The rifle looks and feels great, but how does it shoot? In terms of felt recoil, the weapon gently rocks back and forth in the shooter’s hands. This is likely a result of the combined hefty 7.5 pound weight of the rifle and it’s slant-cut brake that redirects hot gas vertically to counter muzzle climb. 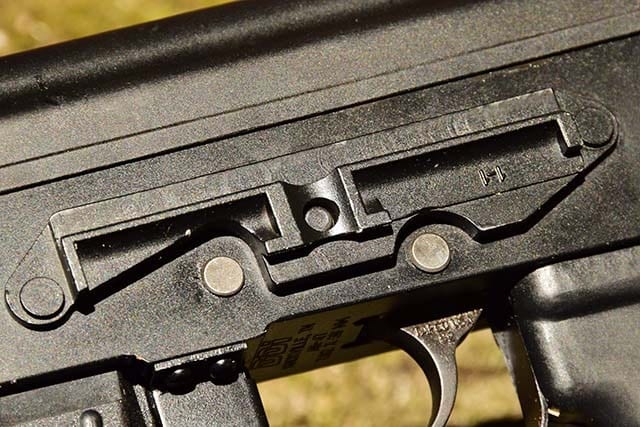 The DDI AK47F features a side rail for mounting optics; a big upgrade from standard milled guns. (Photo: Jim Grant)

Reliability on the gun is exactly what you’d expect from an AK weapon: flawless. My testing period covered 800 rounds of mixed Brown Bear, Silver Bear surplus Yugoslavian brass and Tula ammo. While not exhaustive, the result was a clean slate of no jams whatsoever. Which is doubly impressive because no lubricant was applied to the gun. I ran it “as-is” out of the box.

Some AK aficionados have voiced concern over the tight lock-up of magazines in the DDI’s receiver. In my testing, the only magazines that gave issue were commercial Bulgarian mags. Upon further inspection these magazines were out of spec, but could still be inserted with effort into the DDI rifle. Military steel and composite magazines inserted and extracted without issue and after 30 or so reloads felt hand-fitted to the receiver.

Accuracy from the AK47F is good, but obviously not on par with an AR15. That said, AK carbines aren’t target rifles, they’re combat weapons. Shooting from a rest at 100 yards, the DDI AK47F was able to consistently achieve three MOA groups. It showed a slight preference for Silver Bear ammo shooting two and third quarters MOA at the same distance. 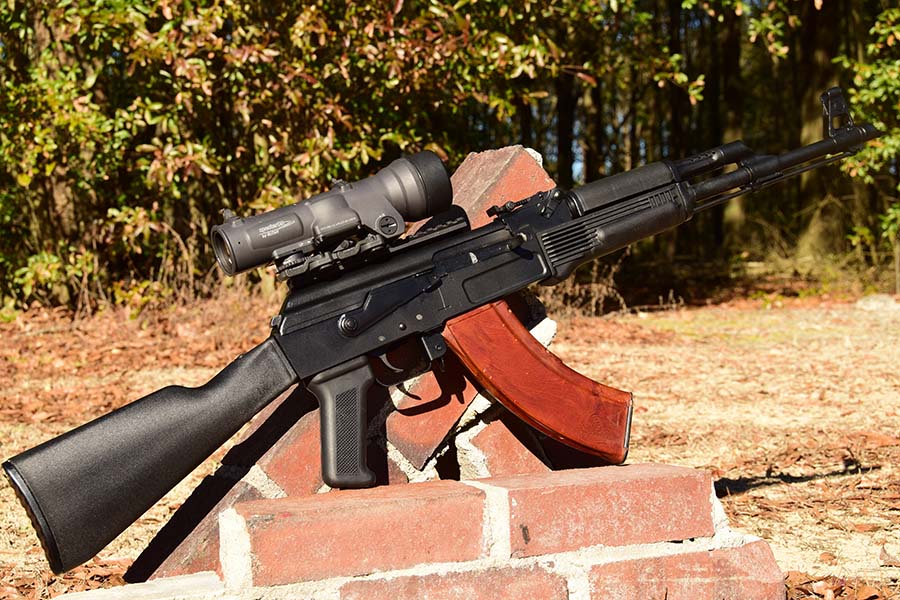 Some people believe optics have no place on AK rifles, but having them helps squeeze every last inch of performance from the weapon. (Photo: Jim Grant)

Retailing for $800, DDI’s AK47F is a more affordable alternative to milled offerings from Arsenal while retaining a more traditional appearance than recent milled guns from Century Arms. The weapon is by no means cheap, but compared to the $1000 plus dollar milled guns from other makers, is a very tempting buy. After my 800-round testing period with the DDI AK47F, I wouldn’t hesitate to recommend it to anyone looking for their first AK, milled or otherwise. Especially if they want a US-made, rock solid ultra-durable AK carbine that shoots great and looks even better.