When a new shooter asks a gun shop owner or clerk what gun they should get to defend their home and family, the majority reply, “a 12-gauge shotgun” for good reason. Few weapons are as versatile and hard-hitting as a shotgun with defensive ammunition. Since the shooter is new, most clerks will recommend the scattergun be pump-action, because it’s simpler and more reliable than a semiautomatic one, at least in theory. In fact,  many auto-loading shotguns these days are just as reliable as a pump-shotgun with normal loads. So if reliability is no longer an issue, where should a homeowner looking for the perfect gun to defend his castle start?

When choosing a defensive shotgun, it’s important to pick one that hold as many shells as possible, since reloading a shotgun under stress is difficult for all but the most practiced shotgunners.Although that shouldn’t be the only qualifying factor; the weapon should also be totally reliable, easy to use and handy enough to maneuver around a house should the need arise.

With these factors in mind, I’ve gathered my top five shotguns for home defense. 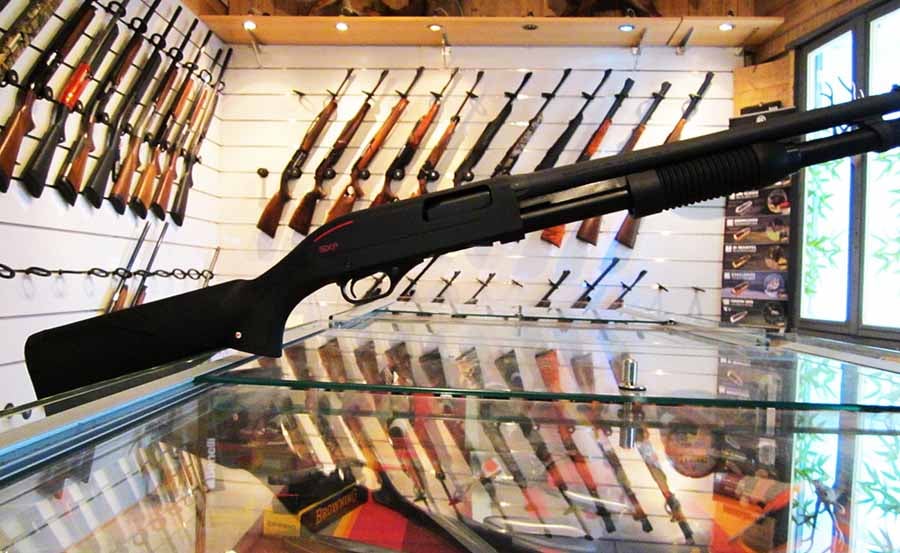 The Winchester SXP Defender is equally at home out hunting in the woods or defending a homeowner. (Photo: Boulouchasse.fr)

Based on the classic Model 12 and 1200 shotguns, the Winchester SXP’s design has proven itself a reliable man stopper in the jungles of Vietnam, trunks of police cruisers and countless farmer’s bedsides for decades. While not as popular as the Remington 870 today, Winchester SXP continues this heritage of rugged reliability while adding modern features like rail attachments, interchangeable chokes and recoil-reducing furniture.

While fewer accessories exist for the SXP than Mossberg or Remington’s cash-cows, all the important ones exist like sights, magazine extensions and flashlight mounts.  Plus, how cool is it to own a descendant of the American Trench Gun of the Great War? 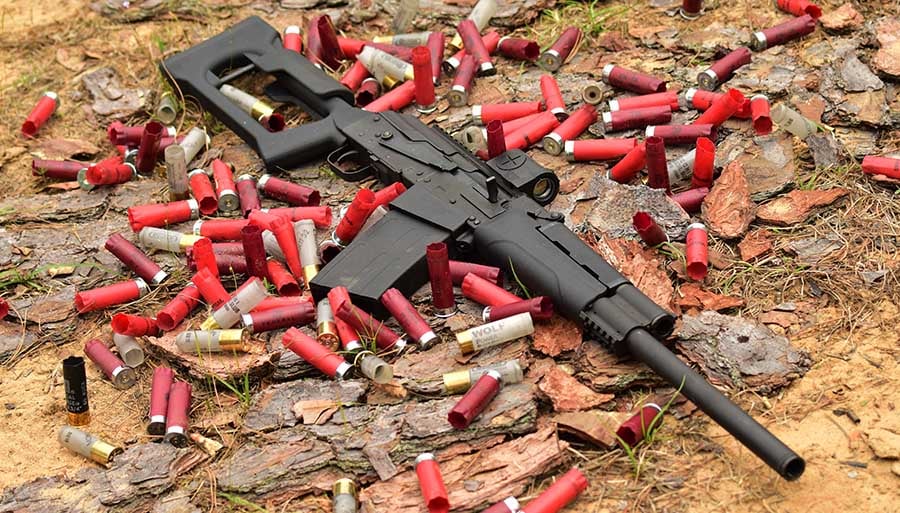 The Fury II is incredibly reliable when the gas system is set correctly (Photo: Jim Grant)

I can hear it now, “A Chinese shotgun!?” Yes, this mag-fed Middle-Kingdom man-stopper bares more than a passing resemblance to Russia’s banned scatter-gun.

Like the Saiga, the Catamount Fury II can require some ammo testing to ensure complete reliability with a chosen round, but once you find one it likes, you’ll love it. Quick-shooting, fast-handling and devastating up close, the Fury II offers shooters a copious surplus of ammo at their disposal with reloads only a few seconds away.  It’s unfortunate that the Fury II isn’t more similar to the Saiga, since that would effectively increase its aftermarket part selection by ten fold and elevate its rank on this list. 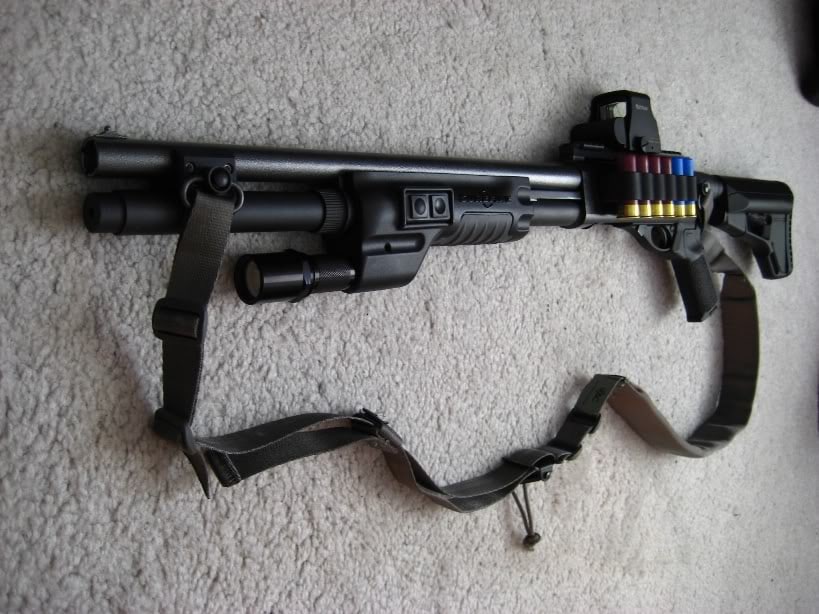 The Remington 870 is the most popular shotgun in history (Photo: Guns.ru)

The most prolific shotgun in America, the Remington 870 has been kicking around in one form or another since 1951. With over 10,000,000 built, it’s no wonder the 870 has the most extensive aftermarket parts selection of any shotgun. The 870 is a reliable pump-action 12 gauge shotgun that distinguishes itself from competitors with its combination of smooth action and simple construction.

The Express Tactical takes this solid shotgun base and adds an adjustable buttstock, ghost-ring sights a two-round magazine tube extension and a compensator, culminating an incredibly potent lead-slinger. 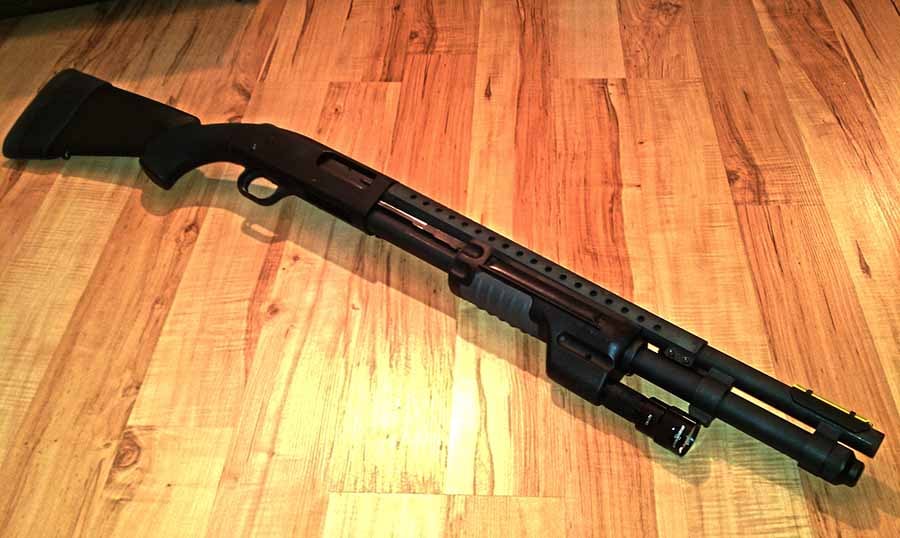 Mossberg 590 shotguns are still in use with the United States Marine Corps today. (Photo: TnGunowners.com)

Adopted by the United States Marine Corps in 1987, the Mossberg 590 is a ruggedized version of Mossberg’s 500 series pump-action shotgun. Available in dozens of configurations, the 500 is the second most popular shotgun in America,and one of the most dependable firearms ever made. Equally well-suited for hunting, home defense or combat, the Mossberg 500 optimizes shotgun versatility.

Its only downside is that it doesn’t pair well with pistol-grip stocks due to the location of its tang-mounted safety. If you’re torn between a Remington 870 and Mossberg 500, choose the 870 if you plan to use a pistol grip and the Mossberg if not. Either shotgun will last a lifetime, with Mossberg having an edge in overall durability. 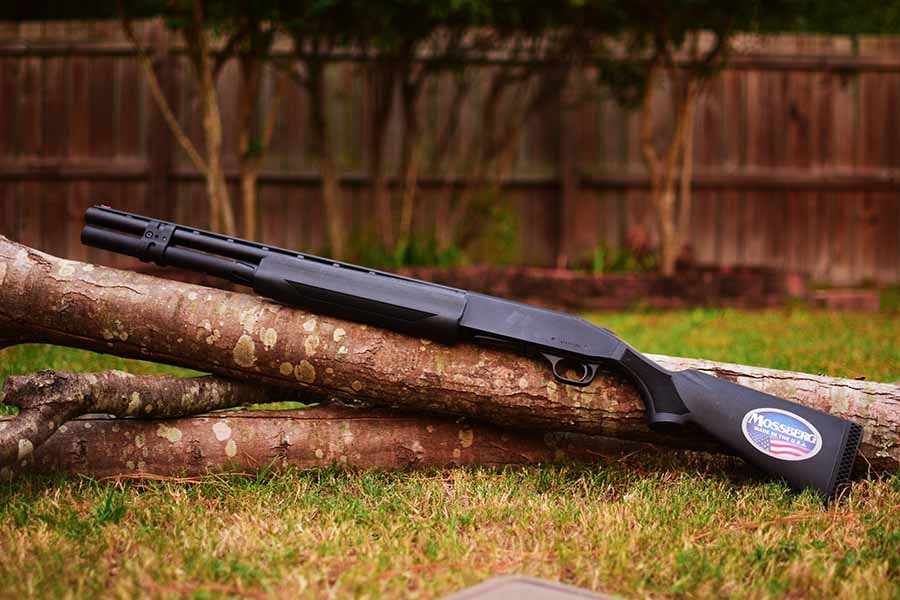 The Mossberg 930 JM Pro is the best competition shotgun for the money and doubles as one hell of a home defense arm as well. (Photo: Jim Grant)

I’m sure I’ll catch heat for this one, but the 930 JM PRO is the best semi-automatic shotgun on the market, for the money. I know you’re thinking I’m an idiot and I’m sure you bought a 930 SPX some years ago that took hundreds of rounds to break in, me too. The 930 JM PRO shotguns that I’ve run have functioned either 100 percent, or could be made to run by striking the buttplate on the ground, even after thousands of rounds. Designed for 3-gun use, the JM PRO ships with an extended magazine tube holding either nine of ten rounds, beveled loading gates and a fiber-optic front sight. It’s a tactical shotgun in a box, just add shells.

One of the best parts of firearms being a mature technology, is that most kinks are worked out of the designs by now. So if a buyer picks up any of these guns, they’ll either run out of the box, or after a few boxes of ammo. Keep in mind with this list, I can’t take into account any personal experiences you have; if you’ve never owned a gun, but have shot your grandfather’s lever-action shotgun tens of thousands of times, go with that. As evidenced by Jerry Miculek, am experienced or talented enough shooter can make any gun the best weapon ever. Whichever shotgun you decide on, test a few boxes of your desired defensive ammunition before placing it beside your bed at night; during a home invasion is a bad time to test how reliable your shotgun really is.