The Kel-Tec P-3AT and Ruger LCP Side by Side

Everyone who carries a concealed handgun has had to make some decisions.  What caliber?  What type of gun?  What company?  The choices are complex enough, but how do you decide when two companies put out identical firearms—same caliber, same functionality, almost identical appearances?

How do you tell the two apart?  For me, the answer was simple enough.

These two guns are identical in almost every way.  To the casual observer, there are few features that differentiate the two guns.  Both have polymer frames with steel barrels and slides.

In order to measure the differences in size, you need a micrometer.  The Ruger LCP is just a bit taller and wider, but we are talking 1/10-inches in most directions.  Their barrels are both 2.75-inches, which is the bare minimum (and really limits you to close quarters shooting).

It doesn’t help that the two I have are both black.   Kel-Tec offers more in the way of colors.  That may be the deciding factor for many people—so advantage Kel-Tec.  Unless you want a laser, like this Crimson Trace affixed to this LCP. 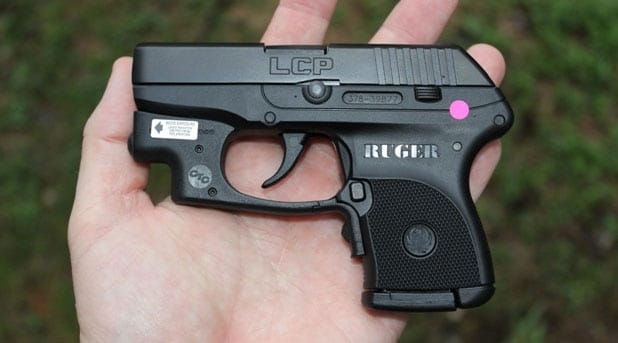 Still—the angles on the guns are identical.  The grips are the same length.  It is mind boggling.  We’re not talking about two 1911s, for which the patents have expired.

There is one striking difference in the way these two guns feel, but I’m only conscious of it when I’m actually scrutinizing the guns, side-by-side.  The Ruger has an indention in the grip that runs parallel to the slide.  This concave trough fits my thumb nicely and gives me just a bit more grip.  In the feel category, Ruger wins.

The extractor on the P-3AT is a massive, external claw.  It works well, throwing spent brass well away from the shooter.

The LCP’s extractor has more in common with a Glock extractor.  Also functional.  Both are reliable, though the Kel-Tec’s is easier to fix if something does go wrong.

The Ruger has a catch for the slide, for what that’s worth, but it doesn’t lock open on empty and it takes a bit more umph to get a magazine into the Ruger.

I’ve hammered away at both of these guns and neither has given me any issues.  Both are predictably accurate.  Both feed everything well.  Both eject, and chamber the next round exactly like they are supposed to—no bogus break in periods needed. 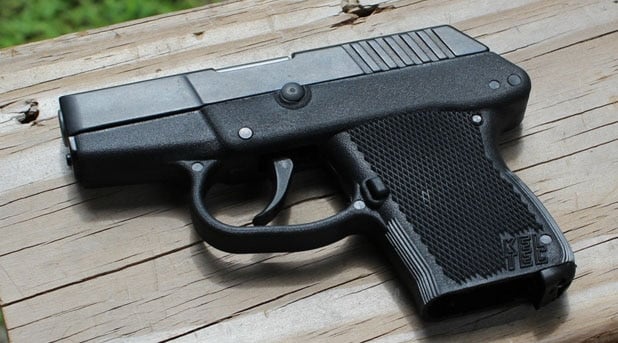 But the winner in the function category is the Kel-Tec.  Here’s why. The trigger pull on the P-3AT I have in for evaluation is shorter than that of the LCP.  Much shorter.  While I really like the LCP, I don’t like the trigger pull.

This isn’t a huge deal, but it could be.  When firing from the hip, or squeezing off multiple shots, trigger pull is almost inconsequential.  But aiming a double-action-only gun is hard enough.  The long pull often results in me shifting my grip, which drops shots low and left.

This alone would decide it for me.  If I had to choose one or the other, I’d probably go with the Kel-Tec.

I’m not sure which one I’d actually recommend.  I suspect that the decision will come down to brand loyalty for most folks.  I really appreciate how Kel-Tec worked to define this market.  Ruger, in this instance, was simply following market trends (closely following these trends).  But Ruger makes great guns and stands behind their products.

I’ll leave you with this thought, and it has to do more with the philosophy of concealed carry.  A couple of weeks ago I stumbled into a heated discussion about the efficacy of various popular concealed carry rounds.  It was familiar territory for me.  The .38 vs the 9mm.  Eventually I was asked to contribute an opinion. My answer was simple enough—I like the .380.  It is an effective round when it hits the intended target.

And for the last two weeks, I’ve carried the LCP in my front right hip pocket. It is summer, and I’m wearing shorts and a t-short, mostly.  The gun disappears in my pocket.  As such, I always have it with me.  And that can make all the difference.