The Most Prolific Rifle of WWII: The M1 Carbine

Like most everyone, I have some favorites among firearms with one of them being the great little M1 carbine. The early 1940s saw the need for a specialized rifle to equip second-line troops and specialists such as machine-gunners. The result was a rush to produce something that would be lightweight, relatively small and easy to carry, and able to be stowed in the vehicles such troops may be using.

Several manufacturers submitted proposals with the winning design going to Winchester. It was for the great little “Carbine, Caliber .30, M1” or, more simply, the M1 carbine. 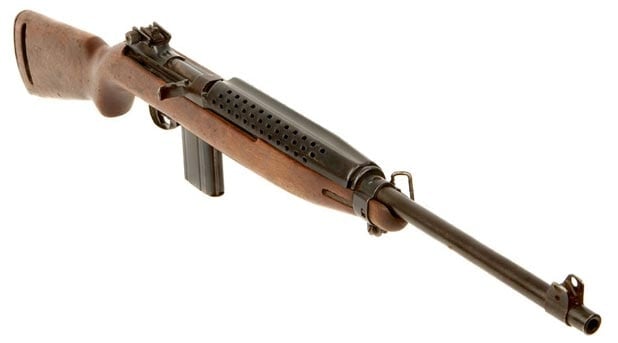 It was based on the use of an unusual for the time gas-operated system that was designed around a special cartridge, the .30. It actually works by simply tapping propellant gases from the underside of the barrel through a small hole to pass into a sealed chamber cylinder. That allowed the impinge on the head of the piston-like slide to move back thus starting the process that unlocks the bolt, extracts the spent cartridge round, compresses the return spring, which in turn chambers a fresh round, and then finally locking the bolt once again.

Whew, getting through that explanation sounds lengthy, but it is really just simplicity when you think about it.

The M1 turned out to be an enormous success right from the start – something unusual for a rifle used under combat situations because normally there is a lengthy teething process. Not so with the M1, and it was soon issued to front-line troops and to the officer folks. In order to speed the introduction of the rifle into the hands of the troops, it was first pressed into service as a single shot weapon. There was also a folding stock model used by airborne troops, the M1A1. The later variant capable of firing on full automatic soon followed and was known as the M2.

The M2 has a cyclic rate of right around 775 rounds per minute and used a curved box magazine that held 30 rounds. That magazine could also be used on the M1.

The M3 came along as a specialized night-fighting version. It had an infra-red night sight that was actually quite effective. There were only around 2,100 of the M3 models produced however. 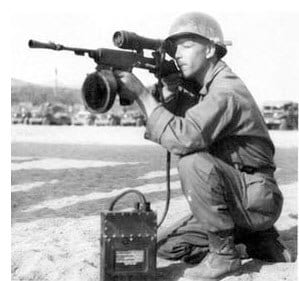 The total production line of all the models came out at around 6.3 million, making the rifle the most prolific weapon family of World War II.

As much as I like the M1, it had its critics. The .30 caliber round, as an example, lacked stopping power, and because it was a carbine it lacked extended range. Its effective range was touted as being in the 100 meter area, but I’ve noticed that pretty darn accurate shots can be put out to around 200 meters. Beyond that mark the bullet seems to sink pretty quickly.

After the war was over it seemed to go out of favor and it didn’t arm the military forces of too many countries. The Royal Ulster Constabulary in Northern Ireland, however, loved the M1, and they armed their units with quantities of them. They were used to counter the IRA who used more powerful Armalites during the time of The Troubles in Northern Ireland.

Its overall length was 35.6 inches; its weight was 5.2 pounds; it had a barrel length of 18 inches, and all in all was a very nice rifle. You can get original examples of M1s today for next to nothing at some gun shops, and they are outstanding on the range, for small game hunts or to get rid of vermin. The M1 I had for as long as I can remember was sold to a friend of mine for $200, and he’s thoroughly enjoying it. But it can generally be found for about $650.