Sailing through the Sea of Remington 870s

A couple of years ago, I had a problem with some rabid raccoons.  I knew I needed a shotgun, but not which shotgun.  I asked around and kept hearing the same thing.  Get a Remington 870.

But what I found was a mind numbing variety of shotguns, all of which were Remington 870s.

The Remington 870 is arguably the most prolific pump shotgun.  More than 10 million have been made.  There are so many existing variations and customization that it is hard to define exactly what an 870 is.  Remington currently makes more than thirty variations.  But that doesn’t begin to represent all of the possible variations.

Gauge.  Barrel length.  Barrel thickness.  Sights.  Finish.  Materials.  Grips.  Length of the magazine tubes.  Chokes.  Rifling.  Forend design.  All of these are variable to some extent.

And then other companies, like Wilson Combat and Serbu, build guns on the 870 platform. 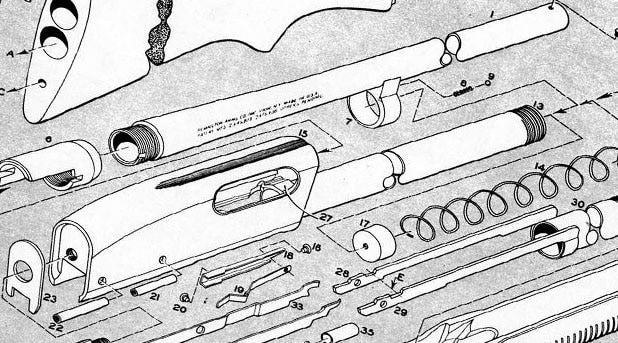 But one thing stays the same: the action.  The reason for the 870’s success is not how many of them Remington has sold, but how well they work.  The 870’s pump action is durable, reliable, and easy to operate.  And it is the real feature tying all of these guns together.

Some of the most beautiful 870s have wooden stocks and blued barrels. The Wingmaster was one of the first 870s, and is now one of the more aesthetically pleasing pump shotguns.

As the name might suggest, the Wingmaster is an all-around good bird hunting gun.

At close to 60 years old, the Wingmaster represents Remington’s long tradition.  It is a classic.  It is also the top end of the price spectrum, coming in above $800.

The bottom end of the 870 line looks almost exactly like the top end.  Wood and steel.  But there is a big difference in the finish of both.  Beyond that, the Express line will shoot just as well and won’t cost nearly as much.

The one pictured above is an Express Turkey.

The Express line was originally intended as a budget-minded Wingmaster type 870.  But these days, the Express line includes many of the possible stock 870 variations.  More have synthetic stocks and more single-purpose options.

Each requires something different from the hunter, but one good gun can be used for all three types of hunting.  It helps to have a longer barrel, and variable chokes.  The gun, though, has to stand up to the abuse of the hunt.  Mud.  Water.  Weather.

The 870 ShurShot Synthetic Turkey above is a good choice if you are especially dedicated to gobblers.  Turkey guns are much more likely to be aimed and not swept across the sky, so they often have no vent ribs and better iron sights.  And even the Express models are available in elaborate camouflage patterns to match most types of North American terrain.

If you’re confident in your marksmanship, a slug gun can be a great tool for whitetail hunts.  There are some packages, like the 870 Express Combo, that offer versatile shotgun barrels and separate rifled slug barrels.  For those of you with enough scratch, Remington offers dedicated slug guns.

The 870 Express Synthetic Deer above is a durable gun, impervious to the damp fall hunts.  The rifled barrels maximize the accuracy of most slugs.  The stock also accommodates a good cheek-weld, which makes aiming easier.

The 870 Express is also a great platform for home defense.  They’re not all black.  But most of them have some plastic.  They start with the basics and move up toward street-legal tactical applications.

The Express Synthetic Seven Round, for example, is designed for defense.  Some 870s have more of a military flair, incorporating pistols grips, desert camouflage patterns, lengthened magazine tubes and better iron sights.

As aftermarket accessorizing becomes more popular with the shotgun crowd, the basic 870 models are becoming more popular.  Many are stripped to the receiver and completely customized.

But what if you need both defense and the potential for a bit of offense?  Remington has you covered.  The 870 line has a long history of law enforcement service.  The “P” in The 870P stands for Police. 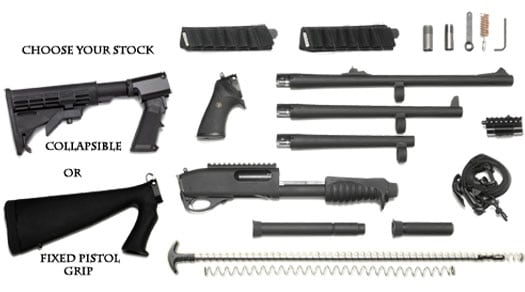 The 870P is now defined by the Modular Combat System.  This single weapon defines law enforcement versatility.  With three different barrel lengths (18-, 14- and 10-inches), this is truly a weapon designed to meet multiple needs and the barrels can be changed without tools.

The “get an 870” advice confused me.  I couldn’t decide which 870.  I still don’t own one.  I think I need to get five or six 870s.  I need a slug gun and a turkey gun, a nice Wingmaster to hang above the mantle (which means I’ll have to get a fireplace, too), and one of those police packages (and a couple of reams of ATF paperwork), just-in-case.