The Ruger Gunsite Scout vs. The Ruger American Rifle

Last year, Ruger introduced a bold take on the scout rifle concept.  The Gunsite Scout is a compact .308 bolt action rifle that is dressed up with some tactical accoutrements.  This year, they rolled out the American Rifle, a more traditional bolt action, also in .308 (or .243, . 270, .30-06).  Both of these rifles are examples of Ruger’s craftsmanship.  Despite some obvious visual differences, they do similar things.  Yet there are two huge things to consider — accuracy and the price tag.

But let’s start with the obvious…

If you’re shopping for a new rifle, you may have considered both of these.  And rightfully so.  When the Gunsite Scout Rifle was announced in 2011, I was immediately attracted to the aesthetic of the gun.  It is handsome. 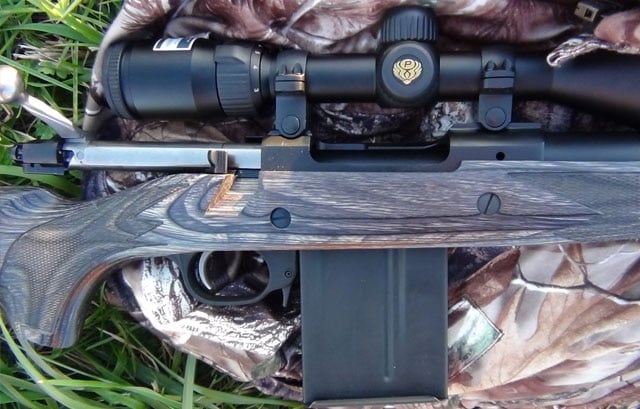 The grey wood in the stock is accentuated by the black finish of the steel, and touched off nicely with a few small glimmers of stainless steel.  The box magazine gives it a bad-ass look.

The American Rifle is more subtle.  While it is built on a recognizable bolt-action platform, the synthetic stock is simply black.  The gun doesn’t turn heads the way the Gunsite does.  That doesn’t mean it is ugly, exactly.  Far from it.  I think I would call it modest. 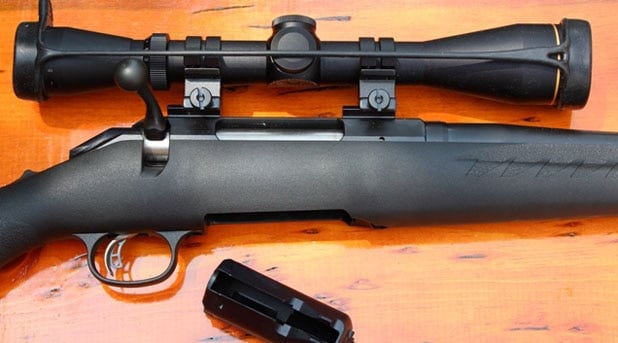 But this isn’t about how these guns look

I will admit to a certain amount of vanity.  I’m vain.  I like some guns because they look good, even if they don’t shoot worth a damn.  Luckily, that isn’t the case here.  Both rifles are capable.  What else makes them different?

The Gunsite has a shorter barrel, at 16.5 inches.  It can hold more ammunition — ten in a magazine.  The Gunsite actually has iron sights, very nice iron sights.  The whole package is heavier.  Even the trigger, which is decent, is a bit heavier.  Seven pounds.  It has a forward mounted rail, and milling above the action for traditional Ruger scope mounts.  In all, I would say the Gunsite is a model of versatility.

The American Rifle has no iron sights.  Instead of the Ruger milled scope mounts, it has two nubbins of rail above the receiver for mounting optics.  The trigger is adjustable, and can be crisp and light.  The magazine, which is polymer, will only hold four rounds.  The barrel is 22 inches, and doesn’t have the cosmetic muzzle break.  The whole rifle comes in at three inches longer and close to a pound lighter.

I really like shooting the Gunsite Scout Rifle.  I used iron sights, a Leupold AR scope, and a Leupold fixed power scope (which was the perfect match).  I can hit what I’m aiming at, especially under 100 yards.  The rifle I had in for review last year did not have a free-floated barrel.  That may have accounted for some of the spread I saw in target groups.  My only real complaint was the effective range.  As hard as I tried (and with both scopes), I could not hit center at any real distance.  I expect a .308 to shoot accurately well past 300 yards.

The American Rifle is free floated.  The longer barrel helps, too.  I used a very traditional Leupold 3-9×40 scope.  With it, the American shoots nice tight groups, and I can place shots with reliable precision out out to 300 yards and beyond.

So if it were just the targets we were comparing, the answer would be simple.  The bullets leaving the American Rifle were much more likely to hit what I was aiming at, exactly, repeatedly, and at greater distances.

But that is only one aspect.  There is no comparing the way these two rifles are built.  The Gunsite is a tank.  It is hefty — though not heavy, exactly, but durable.  And completely versatile.  It would make a great hunting rifle, especially in the south, where distance is limited.  And it is a fun gun.  The Gunsite Scout feels like a gun designed for a postapocalyptic dystopian novel.  It has a decidedly end-of-the-world appeal.   MSRP on the Gunsite, $999.

The American is what it is, and I think that’s why I admire it so much.  MSRP on the American, $449.

While the Gunsite feels a bit like what-if sort of weapon, the American Rifle is grounded in the here and now.  Fall is coming.  And if I had both of these to choose from, I would walk into the woods with the American.