Gun Review: The Winchester 1887 and the CAI PW87 Shotgun 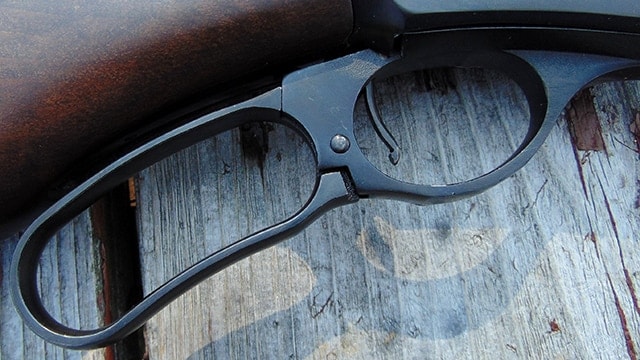 The CAI PW87 is a modern take on the classic lever action of the Winchester 1887  (Photo: David LaPell)

Few of us can forget the scenes in the film Terminator 2 where everyone’s favorite cyborg opens up on his more advanced rival with a shotgun few outside of some collectors had ever seen. Instead of a pump shotgun we were treated to seeing Arnie levering rounds into the chamber. Of course, much to many shooters dismay when the learned the gun used, the Winchester 1887 was made before smokeless powder shells and no one at that time produced a replica.

Times of course have changed and now there are a couple different variations out there, but first you have to understand the original and the history behind it. 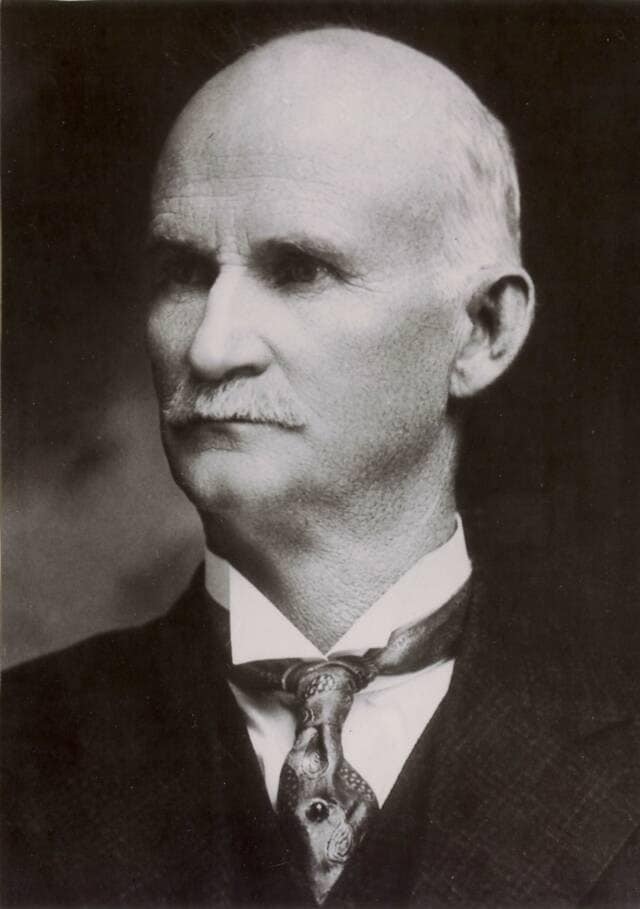 You can thank the legendary John Browning for the design of the 1887 Winchester. (Photo: Wikimedia Commons)

The 1887 Winchester was designed by the legendary John Browning, but it was a gun by many accounts that he didn’t want to make. Browning was in the process of trying to make a pump action shotgun but lever action designs were all the rage as of 1887 and the powers that be at Winchester insisted on a lever action shotgun, so John Browning gave them the best lever action he could come up with. One has to compare the 1887 against the shotguns of the day, not the shotguns we have now to understand it better.

The 1887 Winchester is a marvel of engineering. The falling block action is massive, and working the lever down and forward gives you access to five rounds in the tubular magazine, three more than the standard side by side shotguns of the day. For hunters this was a huge advantage and it also benefited lawmen, stagecoach guards and outlaws alike. The 1887 was chambered in 10 and 12 gauges but only for the blackpowder shells of the day. Even with the earlier type of shotgun shells someone armed with an 1887 Winchester shotgun was certainly a forced to be reckoned with in any environment.

The 1887 Winchester did have its flaws, most noticeably being the hammer spur which is very tough to reach and thumb back. It was far more practical to lever in a round as needed then relying on being able to put the hammer on half cock.

John Browning of course kept working on his pump action design, first unveiling his Model 1893 and then the iconic 1897 Winchester.

Still, the 1887 had ten years before the 1897 Winchester first hit the markets and racks in general stores across the country, and those ten years were some of the most turbulent in the American west. Even with all of its flaws, John Browning did not give up on the lever action shotgun, he improved on his design with the 10 gauge Model 1901 shotgun.

The Model 1901 Winchester when it was unveiled replaced the Model 1887 which was discontinued in the same year. The 1901 was built to withstand the new smokeless powder rounds and only came in 10 gauge so that it would not compete with the successful 1897 pump action. The only barrel length for the 1901 was 32 inches whereas the 1887 you had a choice of 20, 30, and 32 inch barrels. The most notable difference however was the two piece lever with a trigger block that was intended to help prevent accidental discharges.

Several other companies have tried the lever action shotgun with limited or no success. Marlin in 1929 took their 1883 action and chambered the gun in .410, they were made until 1932 and they were either sold for $30 or given away free to Marlin stock buyers who bought four shares of the companies stock. In 2004 Marlin tried the .410 lever design again by making a new version on the Model 1895 frame. It was made for only one year.

Winchester got back in the lever action shotgun game long after John Browning passed on but it was still using one of his designs, the Model 94 rifle. In 2001 Winchester unveiled the Model 9410 which was in .410. It only made it until 2006 before it was discontinued. There are two new design lever action shotguns on the market, one is the Henry .410 lever action and the other is the Turkish made Adler A-110 in 12 gauge. The Adler is wildly popular in Australia where pump and semi auto shotguns are totally outlawed.

Fast forward a little and now we have two sources for the Browning design. One is Chiappa, where you can get a variety of options, from short to long barrel lengths and even a pistol grip version like the one seen in Terminator 2. The versions from Chiappa tend to be fairly expensive, all of their Model 1887 variants cost well over the thousand dollar mark. 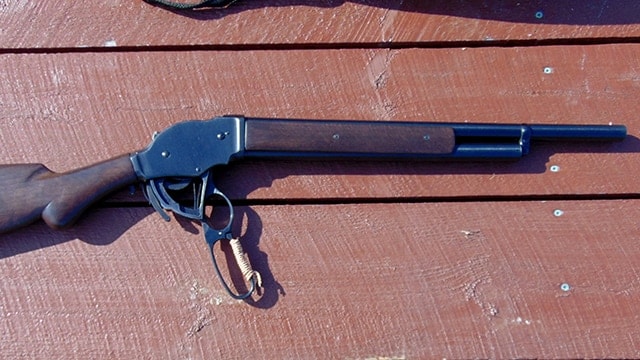 The CIA PW87 won’t break the bank coming in around $325 (Photo: David LaPell)

The second alternative is a Chinese variant imported by Century Arms International known as the PW87 and it is on the opposite end of the price spectrum with prices consistently around the $325 mark.

As much as I would love to be able to purchase one of the Chiappa 1887 shotguns, my bank account and budget could not justify it so I went with the PW87. There are mixed reviews on this gun with some being overly harsh and others that give the gun good marks for what it is. 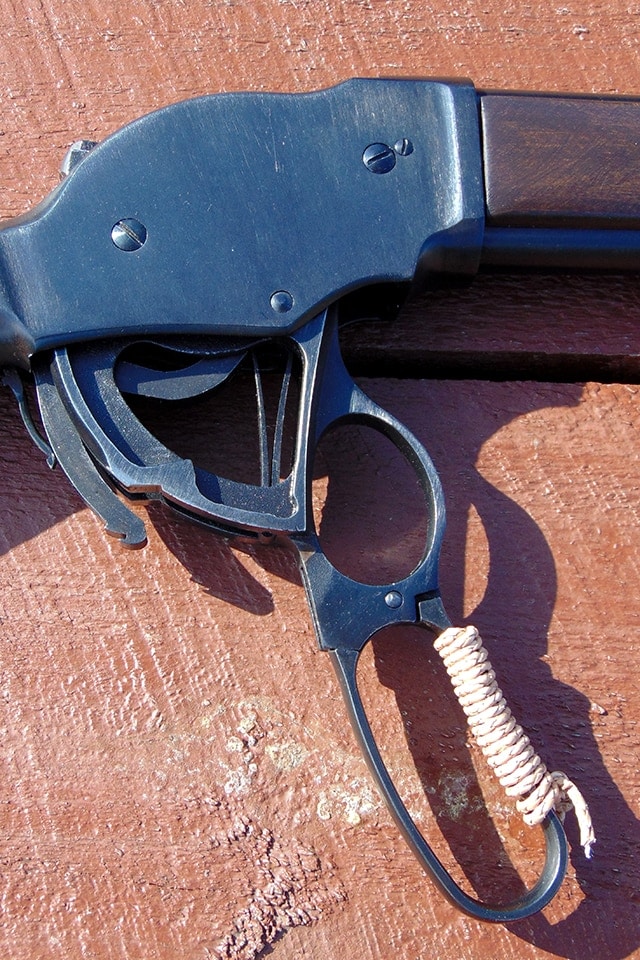 The lever is a two piece which doesn’t make it an exact representation of the 1887 (Photo: David LaPell)

For starters, the PW87 is not a true copy of the Winchester 1887. While it is in 12 gauge, it has the two piece lever that was only on the Model 1901. So you are getting an improvement over the 1887 albeit one that takes liberties with historical accuracy.

When I got the PW87 home the first thing I did was to give it a thorough cleaning because the action was full of sticky packing grease. I went online and found a couple of videos on how to take the action down which was fairly simple. I noticed that several of the parts in addition to being filthy also had some very sharp edges and were a bit rough. Once I cleaned, oiled and reassembled the action it became fairly smooth to cycle.

My first trip to the range with the PW87 I decided to give it a pretty extensive test and that was with twenty rounds of Winchester 2 ¾” 00 buckshot. I found loading a bit tricky at first since you have to load the rounds through the open action to the tube below the barrel. The rounds have to be tilted slightly before pushing them in the magazine.

Unlike some reviews I had watched, I had very few issues with cycling and extraction. I had one round that was sticky and wouldn’t extract well but the rest were no problem. I also found that by tilting the butt of the gun slightly downward so the barrel is elevated a little aid in extraction of the empties as they get kicked clear a little better. The secret is to remember that the lever does have to be worked forcefully and completely because of the long arc it travels.

My second trip to the range found me shooting a variety of rounds, this time some Hornady 00 buckshot, Winchester #4 buckshot and Federal #4 birdshot, all in 2 ¾” which is what the PW87 is chambered for. Again, I had no issues with rounds cycling or extracting. I found the more rounds through the gun, the slicker the action became. Recoil was also not as bad as one would expect with the simple rubber buttpad that is on the PW87. I was also surprised at how well the gun patterns with its 19 inch barrel and modified choke. The Winchester 00 buckshot at 7 yards measured just three inches and the #4 buckshot at the same distance was only five and a half inches. While I would not make the PW87 my first pick for a defensive shotgun, I can see why the design is so popular though for the Australians and would certainly do the job if it was all you had. 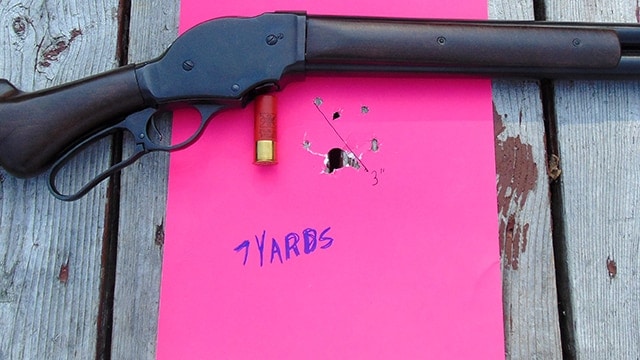 Why own a lever action over a semi-auto or pump? They’re just fun to shoot! (Photo: David LaPell)

So what is the point for owning a Winchester 1887/1901 shotgun when you could just as easily buy a pump or a semi auto? One reason is that the design is just a heck of a lot of fun to shoot. It’s definitely something different, but the problem is that they are too often compared to newer and later shotguns. It’s like comparing two Corvettes, one from 1957 and a brand new one made today and expecting the older version to keep up in every way.

The 1887 Winchester was ahead of its time even though its designer was already thinking ahead to something better. For a short time it was a marvel and the best you could buy. Now it is an anachronism in the modern age of pump action shotguns and semi auto wonders that easily leave it in the dust. Yet when you shoot even the simplest of copies of John Browning’s first repeating shotgun you get an instant appreciation for the masterpiece it truly is. Give one of these guns a try, whether it is the PW87, the Chiappa 1887, or you feel like handloading blackpowder shells for an original 1887, you won’t regret it.