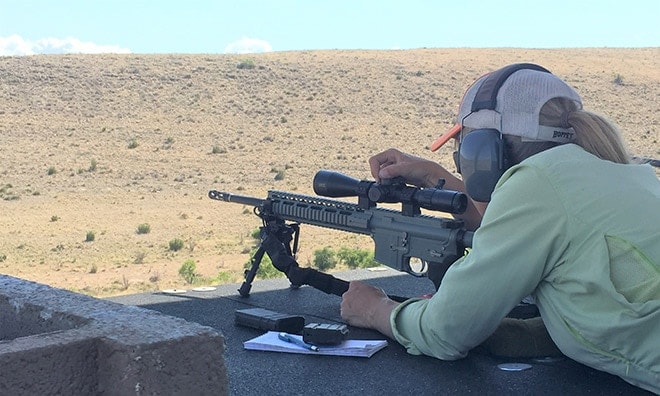 DOPE tablet at my side, I dial the scope for the distance of the upcoming target. (Photo: Team HB)

Recently I had to good fortune to participate in three days of the five-day Precision Rifle Fighter X curriculum provided by STA Training Group, led by Jerod Johnson of Scottsdale, Arizona. This wasn’t my first class with STA, and I knew the former Marine scout sniper and industry expert would lay down some challenging exercises.

The class was held at Felix Canyon Ranch, a historic working ranch and long range shooting and hunting facility in New Mexico. Conditions were typical for July, which is to say hot, dry, and sometimes blustery.

Here are seven lessons that reign prominent in my memories of the class.

Lesson 1: Purchase the full version of your ballistic app, or be frustrated and frustrating in your work.

Seriously, just do it. The nine shooters in the class had a variety of apps including Shooter, Strelok Pro, Sig, and Applied Ballistics. My free version of Strelok lacked a match with the reticle inside the Bushnell LTRSi 3-12x 44mm scope I got to use for this event. A Kestrel weather reader will make a handy partner to give real-time feedback on wind and density altitude, the latter of which, according to Johnson, has substantial effect on bullet performance as compared to altitude alone. Or, calculate it yourself with an online resource. 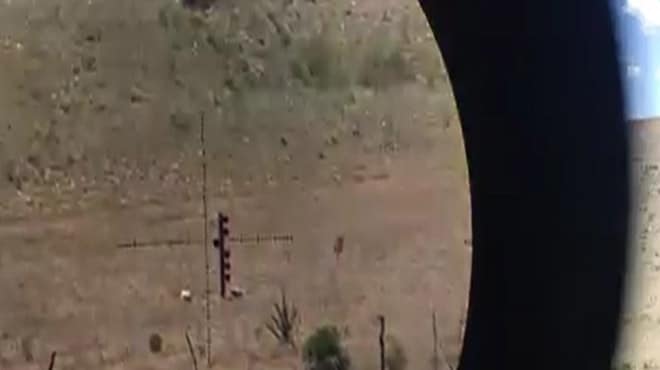 True story: with the relative failure of free Strelok to deliver good information, a friend plugged information into the Federal Premium ballistic calculator and, thanks to knowing that the factory load I was shooting has a Sierra Match King bullet, the program cranked out a holdover list that was, in some cases, dead on and otherwise very close. Without a printer at hand, I took a picture of the screen and used it as a reference when shooting at new distances. Handy, until it was raining and I had to leave the phone behind. Preparing tech gear for rain could be a whole lesson in itself.

I was fortunate to get good suggestions from the online calculator as a basis for developing data on previous engagements (DOPE) specific to my own rifle/scope/ammo setup. Others found factory data on ballistic coefficients to be lacking. To the rescue came a knowledgeable student, attending this class for the fourth time. On his Kindle was a copy of Bryan Litz’s bullet data book, which includes coefficients on a massive array of bullets. It proved a valuable resource to several students. 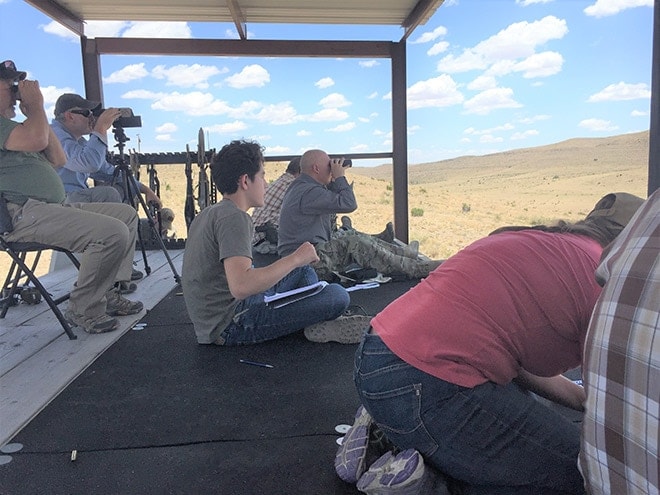 For readers who don’t know what ballistic coefficient is, in simple terms, it’s the tendency of a given bullet to maintain velocity as compared to others in its category.  The higher the number, the better the performance.

Lesson 3: Making a range drawing is a valuable exercise.

Art isn’t among my talents, and I took the news that we’d be mapping the range with a feeling of dread. But Johnson’s explicit instruction on how to compose a map helped me produce something that was actually useful. We sketched only the horizon and left/right borders of the valley, as he defined it, first. Prominent land features came next. Then, targets were called out, described, and coded on the map by number. Conversation on the Felix Canyon Ranch sniper platform was hushed but lively as students got some locations confused, or lost sight of a tiny target far away and asked their neighbors for help. The range map of a more artistically inclined student, who managed to fit both legend and map on the same page. (Photo: Team HB)

Soon, my two-page creation sported 19 numbered stations, few of which were visible to the naked eye, and a legend that interpreted the numbers with a description of each target and, when necessary, its setting.

The exercise of having to find via scope, draw, and create a written description of each target by itself enhanced memory of the area. A novice at the long range game, I’m more accustomed to asking than being asked questions. It was satisfying to be able to whip out my own map later on, to find my own assigned targets or help another find theirs. 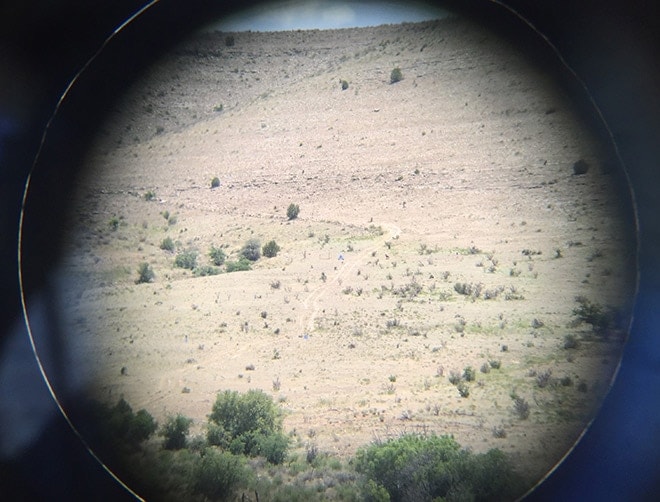 What looks like an empty valley is, when magnified, populated with targets of several sizes and descriptions. (Photo: Team HB)

Lesson 4: Read one good quality range finder for consistent data on any one rifle/scope.

Sig Sauer has created the Cadillac of laser rangefinders, the Sig Kilo 2400. Via Bluetooth, the device pairs with the Kestrel weather station and Applied Ballistics app for real-time corrections to data. It’s the crème de la crème. But other rangefinders with prices in the three-digit range can work too, so long as their maximum distance capacity exceeds the planned target distance. 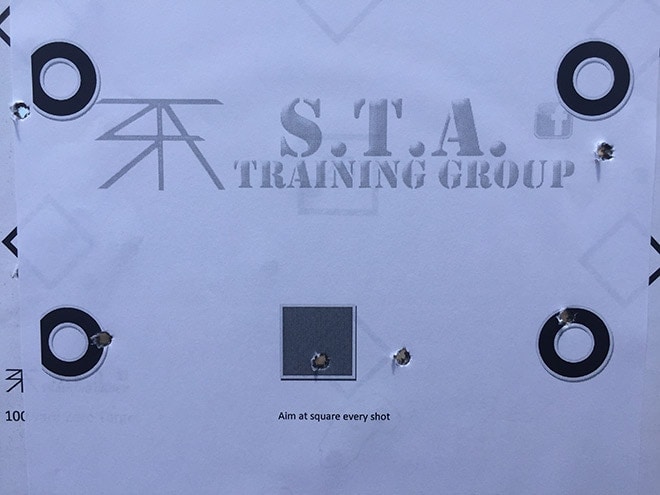 Laser rangefinding technology, I learned, is very useful, but pinpoint accuracy is questionable from any brand.  Each device on the platform read distances differently, by up to nearly 40 yards. What each one was, though, was consistent when returning to an “old” target. When truing data for DOPE, sticking to one rangefinder’s data will prevent errors caused by inconsistent readings.

Lesson 5: Have one portable gear bag, and keep the same stuff in the same place within it.

Life was pretty good as I moved about the zeroing and long range areas carrying my rifle in hand, muzzle down, and my bit of kit—two 20-round magazines, some ammo, and sunscreen—in a small bag. But when time came to pack up and move to a whole new place, I stuffed my Drago rifle case with its plethora of compartments. Embarrassment ensued at the new location when I was unable to find pretty much anything but rifle and ear pro, and convinced myself that I’d left anything resembling ammo at the lodge. Thanks to a patient instructor, the non-crisis was resolved and I was back to shooting before long, albeit red-faced. In the future, I’ll commit to carrying one high-capacity case, keeping gear in exactly the same compartments as when I arrived — even if I have to label them. The need for efficiency in class is great; had this been a hunting trip or bugout situation, this moment of disorganization might have had greater consequences. 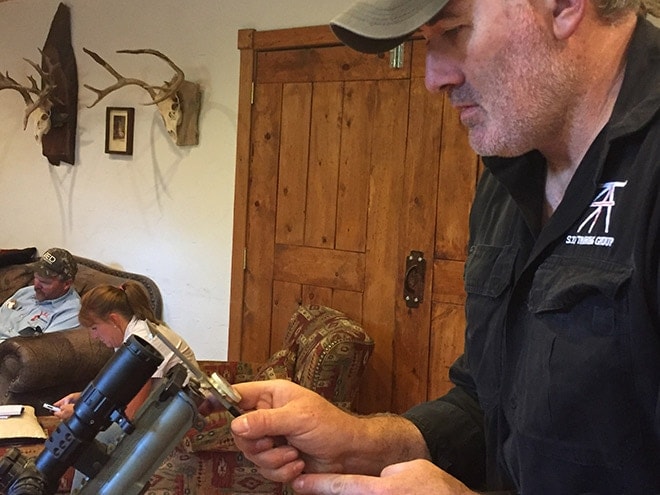 Lesson 6: Long-range shooting is more enjoyable, and less ammunition is wasted, with a dependable weather reader.

Kestrel leads the way in weather reading devices. An atmospheric reader should include, at minimum, wind speed and density altitude. Johnson’s setup includes a nifty wind vane — the low-tech kind, like on a barn — that gives a clear indication of wind at the shooting station — a factor more critical than distant winds, as it has a longer time to influence the bullet’s path. For maximum utility, select one that pairs with your app, and an app that pairs with your reticle. 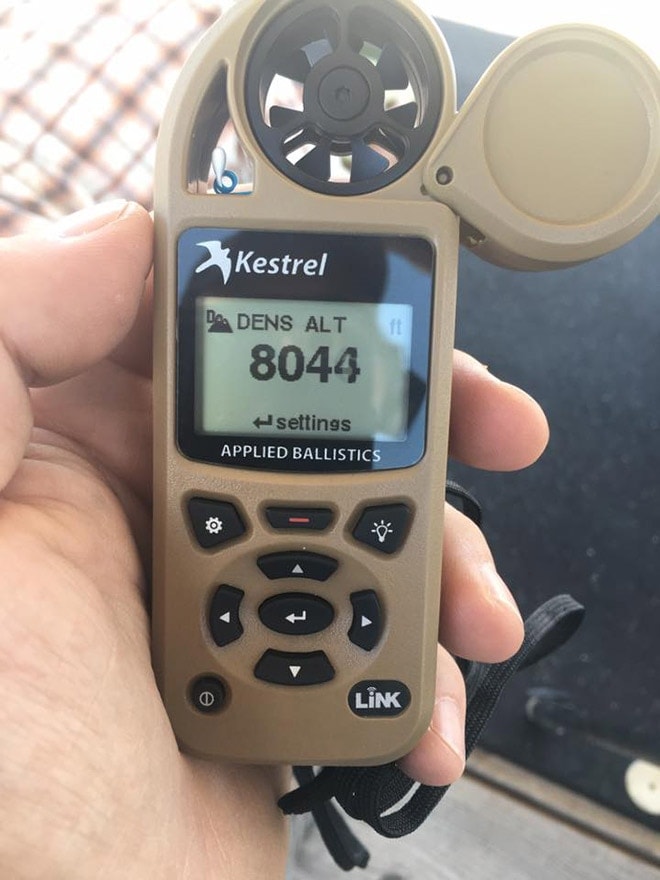 The Kestrel shows the dramatic difference between 4,800 feet of altitude versus density altitude. (Photo by Jerod Johnson)

Why is less ammunition used? Accurate weather readings allow the shooter to pre-adjust for conditions, rather than “walking” the shot onto target. Of course, multiple opportunities to engage a target exist almost exclusively in classes anyway. Good weather readings help make every shot count.

The Precision Rifle Fighter X class turned into one of those peak experiences in life when I least expected it. My rifle is high quality, but small in caliber compared to all but one other in the class. It’s an AR-15 called the BR4 Cutlass, made by Battle Rifle Company. Sporting the Bushnell LTRSi scope and a Tac Shield bipod, I knew it was capable of great shooting, but I didn’t realize the level it could reach until STA Training Group’s expertise was added. 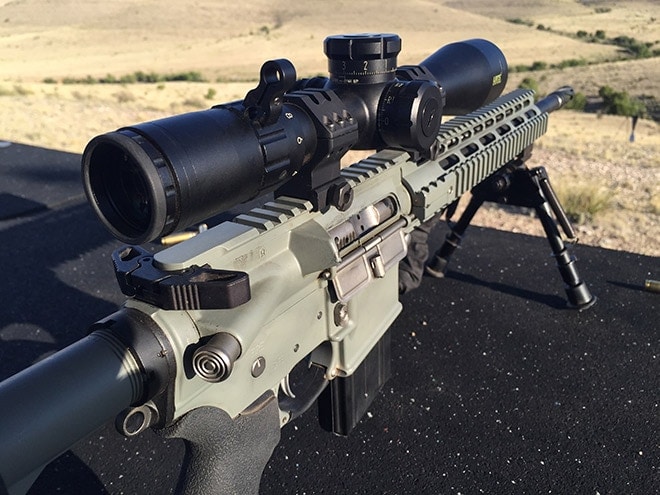 The class incorporates a moving steel target system called In Motion Targets. As the sub-group of shooters walked afield to face this impressive device from 600 yards, the feeling of excitement was palpable. We were about to apply all the numbers crunched earlier in the day, having added movement to the already dizzying array of calculations covered over the weekend. Johnson set the movement of the variable-speed device at 3.0 mph, representing the average walking pace of a big game animal or enemy combatant. Powered by a gas generator, the steel moved left to right, then back again, on a set of tracks approximately 25 yards long. To insure adjustments were still true, a stationary steel silhouette of the same size, 12×18 inches, stood aside the track. 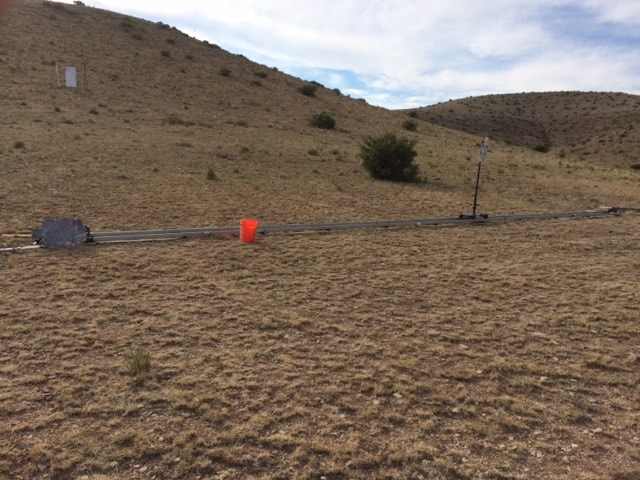 The In Motion target, traveling on its tracks. What a game-changer this is, to be able to fire on moving steel at great distances. (Photo by Thomas Showalter)

Long story short, the BRC Cutlass and Bushnell scope scored hits on that moving steel from 1,000 yards, with approximately 10 shots attempted before success. It’s a rare feat for a .223 bullet, and one that will live as a cherished memory, thanks in no small part to the skilled shot calling of Jerod Johnson. Though hitting a moving target at that distance is not a rarity for larger calibers, having gone through the process of getting it there was of great benefit for learning the nature of ballistics. Good components, data, and technique must all come together for long-range shooting success.

Thanks to all whose time and kindness made this experience possible.