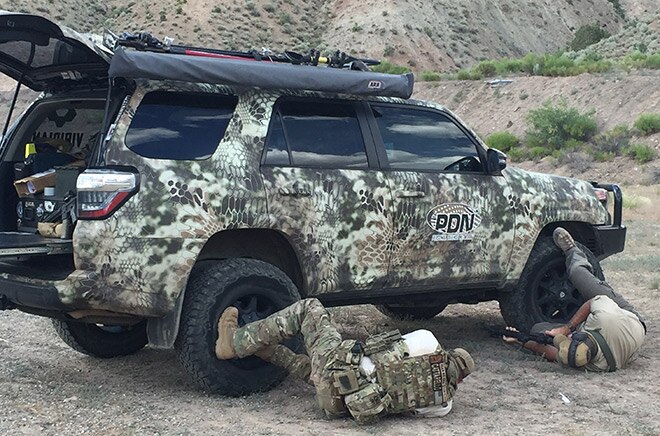 Rob Pincus, founder of the Combat Focus Training method and Executive Director of Personal Defense Network (PDN), as well as other PDN instructors, are currently on a national tour of training events. I was fortunate to spend two days with my best friend, taking PDN classes at the beautiful Gypsum, Colorado Gun Club range. This is an account of one class, Combat Focus Carbine, and my experience in the class.

It was clear from the outset that the lesson plan is designed for practical use by the civilian. Use of the carbine in the close quarters of the average house or around a vehicle was the focus.

Of course, safety was part of the introductory material before gun handling began. Pincus emphasized the inherent physical risks associated with firearm handling and shooting. He made clear the expectation of muzzle-down or muzzle-on-target orientation for the day, stating “the folks on the other side of the berm didn’t sign the waiver.” This and other instruction throughout the day was balanced with context. In this case, Pincus added that muzzle-up orientation is appropriate in certain theatres, the likes of which we’d not be facing in class. 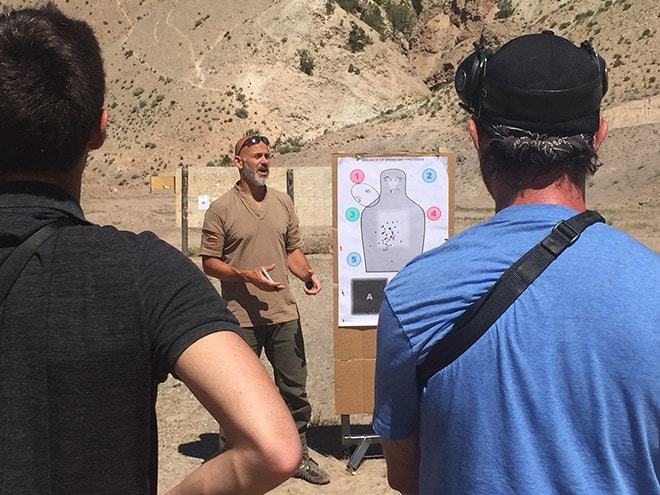 Starting with safety and continuing throughout was an oft-repeated invitation to ask why things are done as they are in the class. The balance of risk and benefit is a term Pincus uses to explain how training decisions and class progress is made. “Benefit must always outweigh risk,” he explained.

Nine enthusiastic shooters were in attendance, two with AKs and the rest with AR-15 rifles. Pincus expressed broad acceptance of each platform, but shared clear preferences on accessories. Picking up an AR, he slid its one-point sling around his head and shoulder. The one-point sling with a quick release to convert it to a two-point for the purpose of non-gun tasks requiring both hands was his recommendation.

Also advised were minimally obstructing accessories for the forend. While the extremely forward, thumb-up support hand grip that’s in vogue is mostly ideal, said Pincus, there are times when the “80s style” mag well or other grip is appropriate. Large pistol grip attachments block the hand from moving in response to changing situations. Small, less obtrusive rail attachments can be useful in that they offer a tactile index point for an individual’s typical grip placement, while accommodating changes to that position. 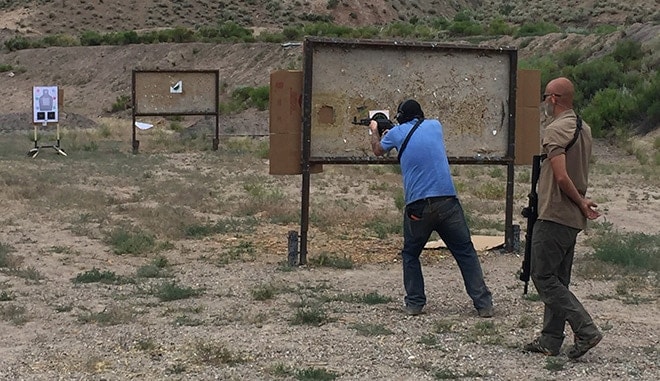 Cover drill on the Gypsum Gun Club range, where the backstop goes up and up! (Photo: Team HB)

On the range, students were instructed to use a high ready position between strings of fire, with trigger finger planted on the receiver, muzzle below horizontal, no cheek weld, buttstock in firing position. Pincus emphasized assessment of the environment between engagements. Setting his assessment process apart from other instruction I’ve had was the assignment to observe not just things but action. Instead of something like, “I see a green fencepost,” we were assigned to say what someone on the firing line was doing, along with identifying information about them. “The guy in shorts with an AK was smiling broadly” was my observation more than once.

Movement was a big component of the class. Once safe conduct and procedure were normalized in the group, virtually every string of fire produced a flurry of activity on the line. Pincus was especially vigilant to correct folks who reloaded in a static position, or who reloaded looking down. “Looking at your gun during a reload is like looking at your brake pedal when a deer runs onto the road,” he said.

Good instructors are equipped with, among other things, useful analogies and the ability to translate words into visuals. We were told to imagine navigating a typical bedroom or living room with a carbine. The trademarked Combat Focus technique, which entails shooting without the use of sights, shines here. The need to navigate with the firearm close to the body, muzzle pointing to the ground between the feet, became obvious when Pincus said things like “imagine a picnic table upside down in the middle of that room, that’s the size of a typical piece of furniture.” 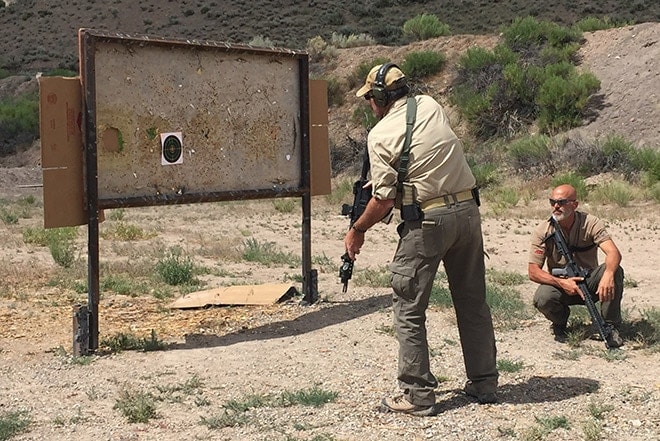 With the practice of these basic principles established, position changes were added.  Under command, shooters moved rapidly between sitting, kneeling, squatting, and standing positions, sometimes firing, but always assessing and adding some lateral movement between commands. A segment was devoted to supine position, with sufficient safety reminders.

Those not familiar with the difference between line of sight and point of impact at close range quickly learned. The Combat Focus target has a hazy center mass area for rapid point-and-shoot action, and other, clearly defined bullseyes about 2 inches in diameter. The latter quickly helped shooters learn the required holdover for close-range precision.

When it came to instruction directed at me individually, the advice that made the biggest difference was to not angle the trigger-hand side of my body away from the target at all, in conjunction with shortening the stock to compensate for the shorter reach from shoulder to trigger. “That’ll give you better recoil control,” Pincus said, and it did.

During a segment on barricade shooting, I found myself a bit frustrated by what was, in part, a misunderstanding of instruction. For real-world safety, students were not permitted to raise the rifle until the target was in sight. To avoid unintentional penetration of the wall due to sight/bore offset, canting the rifle wasn’t permitted. Shooters took advantage of concealment by changing the firing shoulder depending on whether they were navigating the barricade from the right or left. Past competition experience added details, like absolute compliance to the no-foot-beyond-the-line rule, that I need not have been thinking about. While maximum concealment is of course ideal, keeping the carbine vertical and avoiding the feeling of collapse in my arthritic knees made this exercise sticky for me. 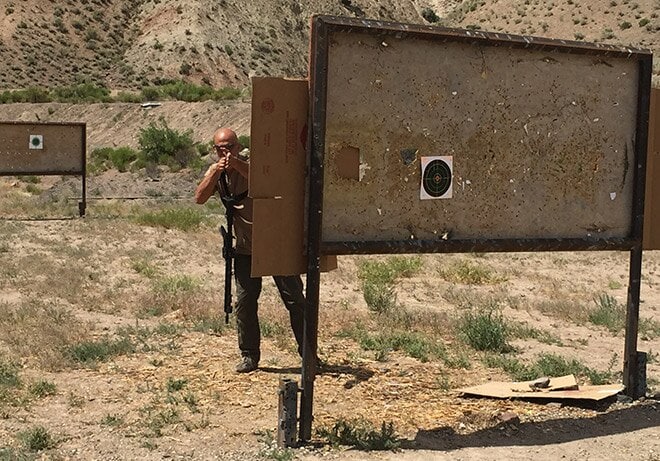 A fun and challenging culmination was the opportunity to use the official PDN- and sponsor-emblazoned SUV as a barricade. This exercise combined all the skills covered in class in an action-packed few minutes, with as many as three shooters at once positioned behind the body or tires, making both center mass and precision shots from non-traditional stances. As Pincus said, “vehicles are everywhere,” so getting comfortable shooting from within and around them is time well spent.

Time flew by, as the class generally had everyone firing in unison, or learning from observation during barricade and vehicle drills. This was a quite physical course, with some light running in addition to lots of positional changes.  On a personal level, I left feeling confident about my ability to quickly judge a holdover and send a precise shot downrange without any second-guessing. Combat Focus Carbine, as given by the Personal Defense Network program, is a great class for anyone who owns a carbine for personal defense, has finger and muzzle discipline, and sufficient physical capacity to repeatedly change shooting positions.