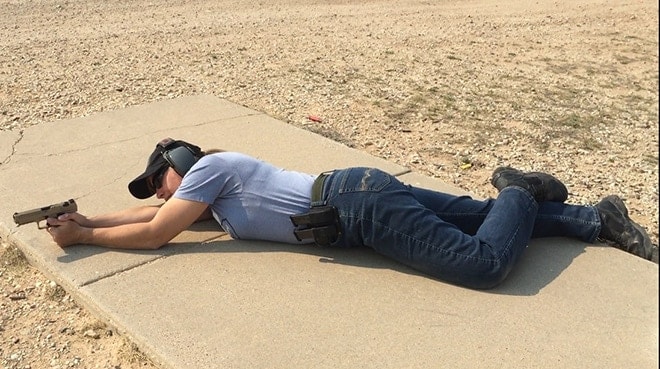 Firing your handgun from the prone position is a great skill to learn and use. Here are some tips to safely enter and exit the prone shooting position with your handgun. (This is not to be construed as instruction for prone long-gun shooting.)

The prone position offers a number of advantages where defensive shooting is concerned. Being low allows you to take advantage of cover or concealment, like a car tire or furniture. During many crimes in progress, the criminal actor is nervous and not using sensory input to its full advantage. We expect to see other humans in a typical vertical profile, with head being the highest visible feature, then shoulders, and so forth. In prone, a shooter is less visible and less identifiable as human.

While most people’s range time is spent firing from a standing position, there’s no guarantee that an attack will happen during a convenient upright time. It’s a good idea to plan for all possibilities, including being caught on, or knocked onto, the ground, and needing to fire from there.

Best of all, shooting from prone is fun!

The technique described here, referred to as rollover prone for purposes of the article, has advantages over flat-on-your-abs prone. It allows for breathing to be natural and not to interfere with accuracy. This is especially true when wearing body armor or other impeding features, like a chest rig and/or breasts (do moobs fall into this category?), on a torso. It’s easy on the lumbar area of the back when in prone for extended periods.

Rollover prone aids in accuracy for firing at longer distances. With the gun anchored into your hands, which are anchored on the earth, it’s an incredibly stable position. If you’ve been struggling to make hits at 25, 50, 100 yards or even more with your handgun, this position, when done correctly, allows a shooter more opportunity to feel any errors in the shooting fundamentals. 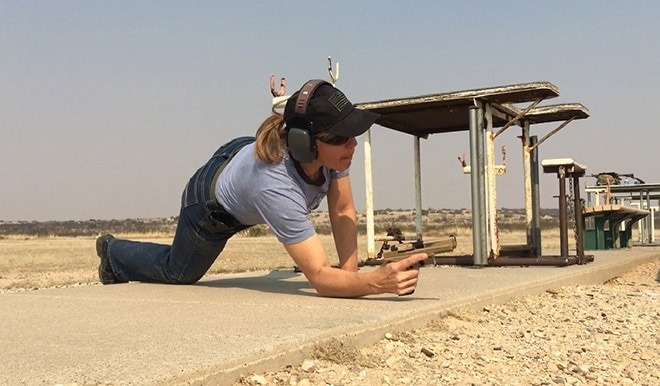 No matter how awkward the movements are between standing and prone ALWAYS keep the muzzle forward of the body. (Photo: Team HB)

Shooting from prone is fun! Done as described here, it’s very comfortable, unless you’re lying on a cactus, ant bed, or baseball-sized rocks. While effective real-life use of prone may involve painful surfaces, set those aside for advanced practice.

Getting up and down: THE RULES

Safety is paramount!  Follow these rules and avoid the injury or fatality that can happen when this training is done incorrectly. Guns.com and I bear no responsibility for unintended consequences of your practice, including property damage, injury, and death.

The gun should be in your primary hand, if not both hands, and pointing in a safe direction BEFORE, DURING, AND AFTER assuming the prone position.

This means draw before you begin to drop into prone, don’t reholster until you’re safely upright again, and keep the muzzle pointed downrange, with ALL of your body parts behind it, through the entire process.

Getting up and down: THE METHODS

There are two methods described here. Eyes should be focused on the target or threat environment during the whole process of getting into and out of prone. Once in place, until you’re done firing and considering getting back up, it’s time to focus on sight alignment, and sight picture, finally establishing sharp focus on the front sight during firing. Don’t fall for the temptation to look at the ground or elsewhere. 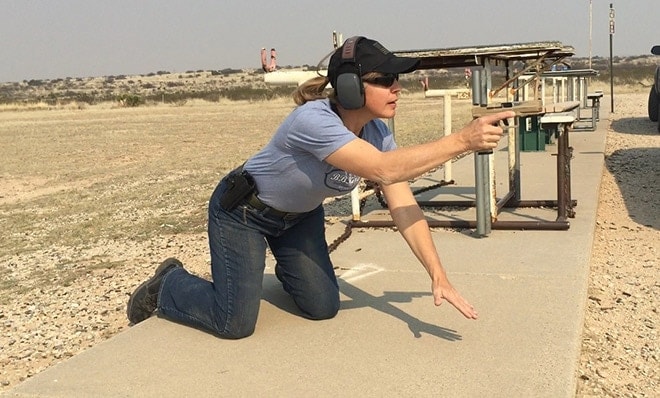 This is the more expedient of the two methods covered here. However, it can be near-impossible on rough ground or for people with knee or ankle injuries, so choose accordingly.

With gun drawn and held in a correct two-handed grip with finger OFF the trigger, position the shooting -hand side of your body 45 degrees away from the target, keeping the muzzle pointing downrange. Drop to both knees. 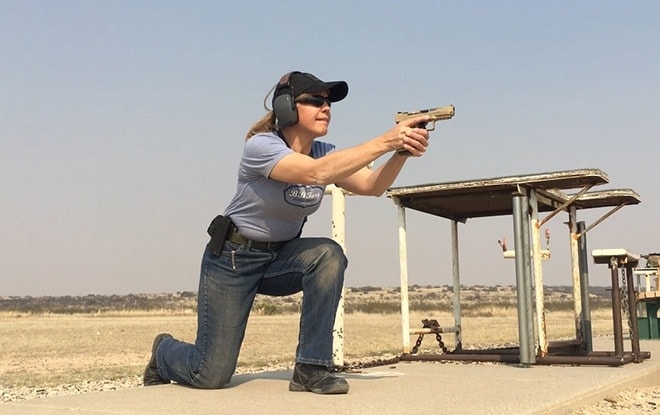 This method is a bit slower, but more stable on rough ground or for those of us with aches and unstable joints.

With gun drawn and held in a correct two-handed grip with finger OFF the trigger, position the shooting -hand side of your body 45 degrees away from the target, keeping the muzzle pointing downrange. Point the toe of the rear foot horizontal to the target. Take a big step with the support-side foot forward and in front of you. Slowly bend both knees until your front leg is bent at 90 degrees, and your back leg knee is on the ground.

If you must use your support hand on the ground to get down safely, keep the muzzle downrange and your body parts behind it! If this sounds like repetition, it is.

Put your support hand (non-shooting hand) on the ground and kick or slide your legs out behind you, maintaining your body’s angled position in relation to the target. As you land, roll onto your strong-side (or shooting hand side).

Bend your support-side leg (left leg for right-handed shooters, right leg for lefties) and cross the ankle or shin bone over the lower half of your other leg. Check to be sure your feet are comfortable and stable, not rocking on the tip of your toes. A wobbly foot negatively affects accuracy.

Now, ensure that your two-handed grip is in place. A common mistake is to just rest the arms on the ground. That will invite a malfunction in your semi-auto, not to mention poor recoil management with any handgun. Stiffen the firing-side arm and push it toward the target, while the support side hand pulls equally back toward you.

Do not bend your elbows and raise the gun so it’s off the ground. While certain institutions persist in teaching this method, it’s unstable, uncomfortable, and eliminates the joy and accuracy of firing from prone.

The outside edge of your support hand should remain in contact with the ground, with the thought of keeping it as high as possible on your firing hand (avoid “teacupping” to the extent possible). The gun’s grip should not touch the ground. Unless the target is at a sharply elevated angle, with any size pistol, I keep my normal proper grip, with the support hand index finger being against the outside, bottom surface of the trigger guard, and still anchor my hands and gun to the ground this way.

Rest your cheek against your bicep as you establish the sight picture, and keep it there. Even shooters with cross-dominant eyes will find this easy. Comfortable enough to think of taking a nap? You should be. But we have shooting to do.

With sights aligned on target, focus on the front sight and press the trigger slowly. If you’ve done your job, you should find recoil to be negligible, and hits quite easy to make and repeat.

In dusty environments, shots done from prone may kick up a little cloud. If the situation allows, give it a moment to clear if needed to fire again.

Get back up safely

Done firing? Reverse the process of getting down, keeping your trigger finger straight and glued to the frame of the gun. Keep the muzzle in a safe direction:

Double-knee shooters can simply rock back and up onto their feet, both hands on the gun.

Folks may find that putting the support hand on the ground or knee helps stability. Keep equal weight in both feet as you rise. 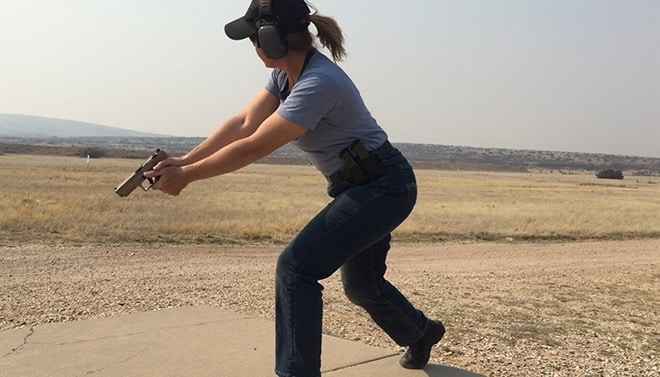 Rising with equal weight on both feet and scanning the environment. (Photo: Team HB)

Visually scan your threat environment as you raise back up to a double-knee or split kneeling stance, and from there to standing. In some environments, the view can change quite a lot!

Once up, reholster if you’re wearing a holster, or put the gun in the condition you desire for whatever is next. 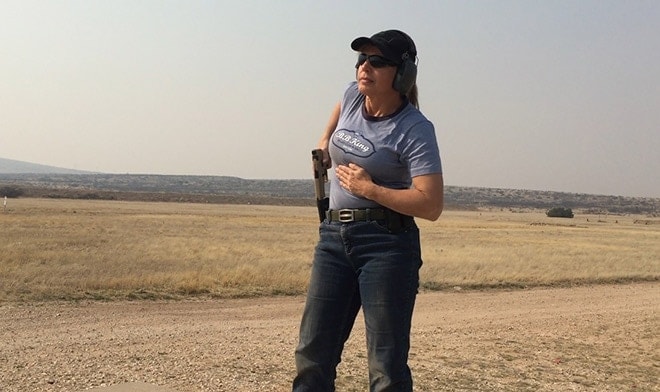 Prone as a diagnostic tool

Have you learned anything about your handgun as a result of shooting in prone? Rollover prone has been a real confidence booster for me, showing me where my fundamentals needed work so that I could hit targets at distances I once thought impossible with polymer-construction guns. Thanks to practice in prone, I can now hit those targets from a standing position as well, with good results.